Before the world, Lula commits to put Brazil on the path of zero deforestation by 2030

Statement on the Lula's speech at COP27, held in Sharm el-Sheikh, Egypt
By WWF-Brazil

In his first speech at an international event after being elected, Luiz Inácio Lula Da Silva  gives the world an indication that  Brazil is back in the system of nations and says that he intends to help the planet overcome the greatest contemporary crisis: the climate one. In order to achieve this goal, he committed himself once again, this time before the most important world audience, to putting the country on the path to zero deforestation, in all biomes, to be achieved by 2030 - which implies a quick and drastic reduction of the figures still in his term.
During his speech in a crowded room at COP27, held in Sharm el-Sheikh, Egypt, Lula presented what will be the central axis of his foreign policy: promoting peace, fighting hunger and poverty and fighting climate change.

Without going into more detail, he said he will work to achieve a “global alliance for food security, with climate responsibility”. Thus, he recognizes, on the one hand, that the climate crisis is one of the factors that most contribute to food insecurity in the world; on the other hand, that it is not necessary to keep destroying ecosystems - including the Amazon and the Cerrado - to feed the now 8 billion inhabitants of the planet. In a conciliatory tone, he said that agribusiness will be an ally in the search for regenerative agriculture and no longer a promoter of deforestation, reaffirming his commitment that the government will work to ensure that the sector can keep increasing production using the more than 30 million hectares of degraded land that exist today.
Lula once again called for a reform in the governance of the UN system, with more space for developing countries and without the current veto power of “the winning countries of World War II''. In this context, he demanded compliance with the commitments made by rich countries in Copenhagen, in 2009, at COP 15, which was to offer US$ 100 billion/year starting in 2020 to support developing countries to achieve a low carbon economy.

With that, Lula resumes the traditional language of the Itamaraty - the Brazilian Ministry of Foreign Affairs -, demanding common commitments, but differentiated responsibilities between rich and poor. But he goes further: when he says that he intends, next year, to convene a summit meeting of the now forgotten Amazon Cooperation Treaty Organization - ACTO to establish concrete ways to protect the Amazon Forest, and when he says that he will “strengthen” the agreement recently signed with Congo and Indonesia to form a kind of “OPEC of the rainforests'' (which he says he doesn’t know yet), Lula shows that the south-south cooperation strategy, almost completely abandoned under Bolsonaro, will once again be the essence of our international relations.

At the national level, Lula committed himself to the restructuring of inspection and monitoring institutions, as well as a relentless fight against crime (illegal gold mining, mining industry, improper occupation, logging, irregular farming, among others). Mentioning again the commitment to create a Ministry of Native Peoples, Lula recognizes the importance of indigenous peoples in the conservation of biomes in Brazil.

At the end of his speech, the president-elect announced Brazil's interest in hosting COP30, in 2025, in the Amazon. The event will be key in the review of ambition, which will close a five-year cycle of the Paris Agreement, and could be an opportunity for Brazil to show the world its commitment and real progress in reducing deforestation and greenhouse gas emissions.

After four years in which there was no environmental policy, in which criminality found ground to spread and the destruction of nature became a government project, we welcome the words of the president-elect with the keyword that was pointed out by himself: hope. But it is not an empty hope: we will be collaborating whenever appropriate, closely following the steps of the new government and demanding whenever necessary. 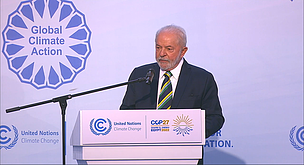