APIB, Conectas, ISA, Climate Observatory and WWF-Brazil signed the complaint
Five United Nations special rapporteurs received this Tuesday (November 15) a complaint against the Bolsonaro government for destruction of the environment and human rights violations. According to the complaint, the uncontrolled increase in deforestation in the Amazon and Cerrado, associated with a situation of violence against indigenous peoples and traditional communities, intensifies climate change, threatens biodiversity and compromises food, health and access to water throughout Brazil and in several other countries.

The complaint is being handed over to the UN special rapporteurs responsible for monitoring issues related to the environment, indigenous rights, climate change, food, drinking water and sanitation, development, housing, in addition to the coordinator of the working group on human rights and companies. The multiplicity of UN Special Rapporteurs who are receiving the document reflects the scope of the complaint, which covers the impacts of deforestation on the rights of indigenous peoples and other local inhabitants, of the broader population in Brazil and Latin America and of the people all around the planet.

The central argument of the complaint is that, in order to ensure people's right to a healthy environment, the destruction of natural ecosystems, especially in the Amazon, must stop immediately, and the rights of indigenous peoples and traditional communities must be respected. Prepared by a group of Brazilian non-governmental organisations, the document calls on the government to stop environmental destruction in Brazil, respect the rights of indigenous peoples and traditional communities, and include the "greatest possible ambition" in its NDCs (Nationally Determined Contributions). For this, in addition to not approving any bill that encourages or facilitates deforestation, it will be necessary to implement an Action Plan to prevent deforestation, resume the work of the federal environmental agency (IBAMA), reactivate the Amazon Fund, restore the budget for the Ministry of the Environment and resume the implementation of management policies for indigenous territories. While the UN Special Rapporteurs on Human Rights and the Environment cannot compel the Brazilian government to act, they can recommend that it do so.

The document highlights that the Amazon, the largest tropical forest on the planet, is getting closer and closer to its "tipping point”, a situation in which it would no longer be able to regenerate itself from the aggressions caused by human beings.

Large swaths of land have already been deforested and deforestation rates under Bolsonaro are at the highest level in more than 15 years. These attacks on the forest and the people who live in it pose real risks to the lives of the people of South America and the world in general. The Amazon is critical for global nature, as 10% of the world's species are found there, and also for the climate, being responsible for the rainfall regime of all of South America, in addition to the regulation of the global climate.

Scientific evidence shows how close we are to the risk of reaching a tipping point in the Amazon. Calculated by scientists between 20% and 25% loss of native vegetation, this is the point at which the Amazon rainforest loses the ability to maintain its original composition and transforms into a more degraded and less resilient ecosystem. Deforestation rates in the Amazon, in Brazil, are close to 20%. In addition to the loss of biodiversity, this change affects the ecosystem services of the forest, such as the "flying rivers", which play a key role in the rainfall regime throughout Brazil. The release of carbon, if that point is reached, puts the Paris Agreement climate target of 1.5 degrees out of reach.

The Articulation of Indigenous Peoples of Brazil (APIB), Conectas Human Rights, the Instituto Socioambiental (ISA), the Climate Observatory and WWF-Brazil signed the complaint. To view the entire document, click here.

Large swaths of land have already been deforested and deforestation rates under Bolsonaro are at the highest level in more than 15 years.
© Reprodução 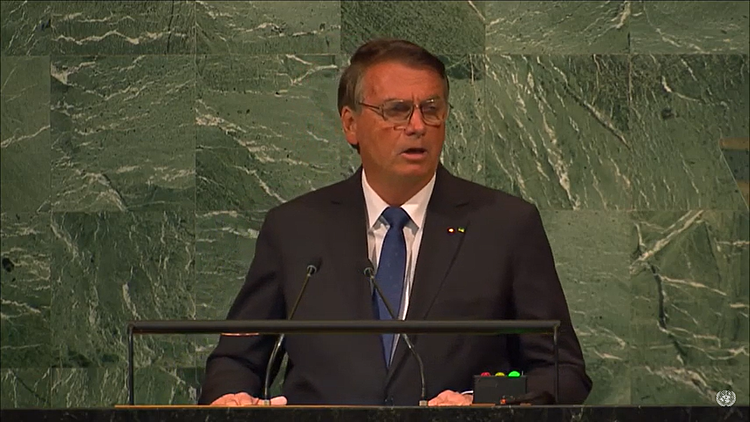 Large swaths of land have already been deforested and deforestation rates under Bolsonaro are at the highest level in more than 15 years.
© Reprodução
Download
Structural violation of the right to a clean, healthy and sustainable environment perpetrated by the Brazilian government
PDF 1.15 MB