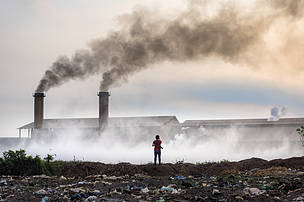 On Monday (11/08), PL 528/2021 will be voted in the House of Representatives as a proposal to create a "Brazilian carbon market." This potentially good news ended up being bad news. Brazil is one of the world's few large Greenhouse Gases emitters – GHG without rules that oblige the most polluting economic sectors to reduce their emissions. However, the bill that will be put to the vote, formally a responsibility of Representative Carla Zambelli (PSL/SP), is managed by the Ministry of the Environment. It is much worse than the original proposal by Representative Marcelo Ramos (PL/AM), which incorporated relevant points presented by the Brazilian private sector and experts.

This dramatic change of the text led by the Federal Government clashes with the two declarations signed by Brazil this week at COP26. The country ratified the texts and committed to a drastic reduction in its emissions by 2030, including methane gas caused mainly by the Brazilian livestock sector. In one of these declarations, Brazil also set the goal of ending all forms of deforestation by 2030, both legal and illegal. Bearing in mind the rest of the legislative agenda supported by the Bolsonaro government, which includes facilitating the appropriation of public forests by land grabbers and weakening the environmental impact assessment system of large constructions and polluting activities, the discourse at COP26, although formalized in two declarations, is totally detached from reality.

Preliminary versions of the bill’s text provided for the creation, within a specified period, of a Brazilian System for Registration and Trading of Greenhouse Gas Emissions (SBRC-GEE), establishing parameters and principles on which it should work. However, the project to be voted ties the start of such a system to a future and uncertain date.  The text has not yet been officially made available, even with the vote already. However, a leaked version links, for no technical reason, the beginning of the period in which Brazilian companies would have to start reducing their emissions to the ratification by Brazil of approved rules under the Climate Convention. The point is that none of the rules currently being negotiated will interfere with how Brazil should regulate the issuing economic activities. It would be just complying with the obligations already assumed. There is, therefore, no reason for this forbearance other than the desire not to make any commitment to reduce emissions.


The House of Representatives will analyze a bill created behind closed doors without any society involvement, which is a real patchwork. It deals superficially with the regulated carbon market and most of its structure to regulation, thus providing a blank check for the Executive Branch to define its structure and functioning. In previous versions, a technical body would regulate the Emissions Trading System (SCE) based on guidelines established by a collegiate with the participation of different sectors of society, with transparency and social control. As the project is now, a collegiate (National Council for Climate Policy – CNPC) will propose the operating rules (it is not clear who approves them). CNPC would be composed in its majority (up to 70%) by members of the Federal Government and issuing companies. There is no participation of specialists and society representatives, who are most interested in having a system that will progressively reduce Brazilian emissions.

The project fails to establish the minimum bases to allow the population an efficient emission reduction system. That effort is sabotaged by the establishment, in a case-by-case manner, that agricultural, forestry, and "alternative land use" activities would be prohibited from being regulated. It generates immense legal uncertainty, as "alternative land use" could be anything. Besides that, the project explicitly excludes the industry responsible for 70% of Brazilian emissions, whether from deforestation or direct emissions from agriculture and livestock. A body with the competence and independence to make these sorts of decisions must define this technical matter. The exclusion of one sector by law will open the way for others to try the same shortcut, to the detriment of the climate in the country and the world.

The bill also does not define what legal instruments the competent authority will have at its disposal to ensure that everyone will comply with the limits established by it. If not included in the law, this could severely limit the effectiveness of the system. Furthermore, it does not deal with social and environmental safeguards applied to emission reduction projects accepted in the national registry.  That puts the rights of indigenous peoples and the forest at risk by excluding the concepts of credit ownership.

In summary, WWF-Brazil understands that the bill does not make progress in limiting the country's greenhouse gas emissions. It creates a confusing, obscure, and flawed system that could make Brazil fall behind in the fight against global warming for years when science demands urgency. If approved as proposed in the House of Representatives, Brazil runs an enormous risk of being left out of the market and failing to capture billions of dollars. That would happen because of a regulation bringing neither legal certainty to investors nor consistency in results delivery. If it passes the House, there will be an urge to change the bill in the Federal Senate, with public debates, previously known texts, and social involvement.