Brazilian youth will bring voices from the forest to COP26 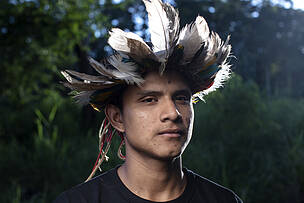 Bitaté Uru-Eu-Wau-Wau
© Marizilda Cruppe / WWF-UK
Amazon activists will be at the 26th UN Climate Change Conference of Parties, which this year takes place in Glasgow, Scotland, increasing the visibility of indigenous and traditional peoples

The growing role of young people in defense of socio-environmental rights, especially on the climate agenda, has resulted in increasing mobilizations around the world. It will be no different at the 26th UN Climate Change Conference of the Parties (COP26), which will take place in Glasgow, Scotland, from 31 October to 12 November.

Part of the Brazilian delegation is supported by WWF-Brazil. "We believe that these are the voices that need to be strengthened in strategic decision-making spaces such as COP26, especially after what was pointed out by the latest IPCC Report", says Giselli Cavalcanti, coordinator of the Engajamundo Climate Working Group and strategist of WWF-Brazil campaigns. She is also on her way to Glasgow.

The IPCC Report, released in August, shows that the climate crisis is already bringing irreversible consequences for the planet, such as the melting of glaciers and rising sea levels, and calls for concrete and urgent actions to address the problem.

At this crucial moment, when negative impacts are a reality, it is important that young people - especially indigenous people, who represent the populations most vulnerable to climate change - are present in the main decision-making spaces so they can report what is happening in their territories.

"I want to show the world a little of the reality of indigenous peoples", says Bitaté Uru-Eu-Wau-Wau. At the age of 21, Bitaté arrived in Glasgow on October 27th, with the support of WWF-Brazil. "I also hope to gain knowledge. We are always fighting for our rights in our territory, in Brazil. And we will be at the COP to show our resistance. And to show that we indigenous people will fight everywhere, in Brazil and internationally.", he says.

For Txai Suruí, 24, from Rondônia state, in the Brazilian Amazon, the event will be critical to make the forest's voices echo. "My expectation for this COP is of great visibility for the indigenous peoples", says Txai, who is also already in Scotland.

"It's hard to say what results will come out of here, but regardless of this, the fight within our territories will continue. And it will continue to be a struggle for the planet and against climate change. We will never have climate justice until we place the native peoples, and those who have been fighting for the forest, at the centre of this debate," says Txai, who is part of Engajamundo and also part of the WWF-Brazil Deliberative Council.

"I hope that we are able to echo our voices and bring the situation of the Amazon to the world, showing what is happening within the indigenous territories. We want to place at the centre of this discussion those who have really been fighting for the forest, which are the indigenous peoples", says Txai.

Through a partnership with Engajamundo, WWF-Brazil is also supporting the participation of three young women from the Amazon at COP26, as part of the Voices for Just Climate Action (VCA) Program. The program is funded by the government of the Netherlands and covers Brazil, Indonesia, Kenya, Zambia, Tunisia, Paraguay and Bolivia. In addition to WWF-Brazil, the VCA has as partners in Brazil the Avina Foundation, Hivos and the South African SouthSouthNorth (SSN).

Voice of their own. Indigenous youth are the most appropriate people to talk about their realities and about the impacts of climate change on their territories and on their way of life.

"It is essential that they can demonstrate the importance of having forests, territories and communities protected, showing the world that it is possible for people and nature to live in harmony. We support highly engaged activists who carry all the experience of their territories. Young people and the other populations speak for themselves, they have a lot to say, and we need to listen", says Clarissa.

"The goal is to strengthen organizations and populations in the Amazon territory, through partnerships, so that the population is at the center of decisions regarding the climate agenda", says Clarissa Tavares, coordinator of the VCA at WWF-Brazil.

According to her, this is a project to engage local populations. "The populations in the territories already have their own solutions to face the climate crisis, but they do not have their voices heard. Our goal is to help empower them so that they can be heard and considered in the decision-making processes. And that they can tell their stories and show their realities from communication tools", she says.

The program works with institutional and capacity strengthening, narrative building, media-activism and advocacy based on the experiences and knowledge of Amazonian populations, in order to promote a transformation in the scenario of social and environmental exclusion and destruction, so that these populations are in the center of decision-making.

"One of the program's axes consists in supporting the engagement of young people and women in important spaces for discussion on the climate issue. In the context of the COP, within the VCA program, we are supporting the trip of three young women from the Amazon to take part in this action by through Engajamundo," explains Clarissa.

The partnership made the trip possible for Celina Pinagé, 22, an activist from the Amazon region who lives in the city of Manaus (Amazonas state); Darlly Tupinambá, 21, an indigenous resident of the Tapajós-Arapiuns Extractive Reserve, in the Lower River Tapajós region, in Santarém (Pará state); and Jaciara Borari, 25, from Alter do Chão (Pará). Txai Suruí, who is part of Engajamundo, is also supported by the VCA Program, with funds from the Avina Foundation.