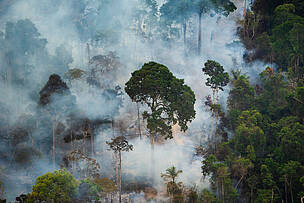 Brazil's reality is tragic, with records of wildfires and deforestation, dismantling of the environmental protection system and setbacks in environmental legislation.
© Araquém Alcântara/WWF-Brasil
Starting today, in Scotland, countries will negotiate rules for the implementation of the Paris Agreement, new emissions targets and financing to combat the climate crisis

The 26th UN Conference of the Parties on Climate Change (COP26) will discuss the direction of a planet increasingly threatened by the impacts of the climate emergency, and will represent a chance to debate how to put the global economy on the path to sustainability after the Covid-19 pandemic.

The event, which will be held from October 31st to November 12th in Glasgow, Scotland, will bring together political leaders, diplomats and negotiators from 197 countries with the central goal of resolving the gaps in the rules of the Paris Agreement - the most important multilateral treaty set to face the climate emergency.

COP26 will not produce a new climate agreement, but it is hoped that it will contribute to the implementation of the Paris Agreement, overcoming the deadlocks accumulated so far and reorienting global efforts in order to confront the climate crisis.

Keeping an eye on Article 6. One of the main bottlenecks to be overcome in the Paris Agreement involves Article 6, which deals with market mechanisms, including the creation of an international market for carbon credits. The impasse in the regulation of this article stopped negotiations in the last two COPs, in 2018 and 2019 - and Brazil contributed decisively to this blockade.

Review of targets. One of the most important points of discussions during COP26 will be the revision of the ambitions for the targets of the countries, so that they can put the world on a path aligned with the Paris Agreement. The targets that have been presented so far by the countries are, on the whole, insufficient to keep global warming within the limit of 1.5°C, beyond which the planet will be exposed to an irreversible climate catastrophe.

In July 2021, an analysis by the Climate Convention (UNFCCC) pointed out that the targets, including the revisions presented so far, would lead to an increas of about 2,7°C in the global average temperature by the end of the century - a value way above the recommended by the IPCC to avoid catastrophic impacts.

Climate finance. The issue of financing to address the impacts of the climate crisis will also be central, as developed countries have not yet fulfilled the promise, formalized in 2009, to spend US$ 100 billion per year by 2020 - an amount that would be yet too small to face the crisis. These resources are needed so that developing countries can reduce their emissions and mitigate the impacts of the climate crisis.

Green recovery. The event gains even more relevance in an environment deeply transformed by the pandemic, which shook the world economy. One of the biggest challenges for negotiators will be reaching a result that takes into account the need to promote a green recovery in a context of recuperation from the global recession, in which the impacts of climate change are becoming increasingly evident.

Brazil's role. The COP26 represents, in theory, a chance for Brazil to try to reverse the negative image related to environmental policies, which has deepened since the beginning of the Bolsonaro government. For this, the country would need to give concrete demonstrations that it is committed to environmental preservation.

This is a hard task, however, as the country's reality is tragic, with records of wildfires and deforestation, dismantling of the environmental protection system and setbacks in environmental legislation. It is worth keeping an eye on the performance of Brazilian negotiators. The government announced that Brazil will make official the goal of anticipating neutrality in carbon emissions from 2060 to 2050 and ending illegal deforestation by 2030.

At COP26, Brazil tends to insist on the thesis of the right to sustainable development for developing countries, in addition to requesting international funding for measures set to combat climate change. The country should seek an increase in the amount promised by developed countries to finance the environmental transition of the poorest nations. However, none of this will be taken seriously by the international community without concrete goals that lead to zero deforestation.

New geopolitical context. One of the factors that generate expectations for COP26 is a possible reorganization of international environmental policy. While Brazil has lost prominence in recent years, US President Joe Biden hopes to elevate the United States to a leading position in climate negotiations.

The United States, seeking to regain leadership in the environmental agenda, advanced in its emissions targets, compared to the commitments that had been made in the Paris Agreement. This new political context will exert strong pressure on Brazil. Without the support of former President Donald Trump, known for his climate denial, the Bolsonaro government is more isolated in its effort to block negotiations.

Meanwhile, other global powers are pressuring Brazil for more effective actions against wildfires and deforestation, using as a resource trade negotiations such as the agreement between the European Union and Mercosur, and Brazil's accession to the OECD.

International clash. The UK, host of COP26, will likely plead with other countries to support an agreement that guarantees the goal of carbon neutrality by 2050. The British government is also expected to push for specific commitments to end the petrol and diesel cars, the coal industry, and to protect nature.

One of the biggest uncertainties at COP26 will be China's willingness to reduce its dependence on polluting sources. The country is the biggest polluter in the world and has investments in coal-based power plants all over the planet. Developing countries, in turn, are expected to press for a large financing package for the next few years to help them with climate change adaptation projects.

Transparency in targets. Transparency will be another key point in negotiations between countries: it will be necessary to define better methodologies for measuring emission reductions. The goal is to prevent each nation from establishing its own method, which would raise suspicion about the veracity of the figures released and would make it difficult to compare the advances obtained by the countries.

Social pressure. The pressure from society for more transparency in negotiations and more ambition in the targets is likely to be as great as the expectation surrounding COP26. Around 30,000 people are expected in Glasgow, including world leaders, negotiators and journalists.

Thousands of activists and companies will also take part in events and carry out protests. The conference could represent a decisive step so that, after the pandemic, it is possible to rebuild the global economy on a sustainable basis, in a deeply transformed world.