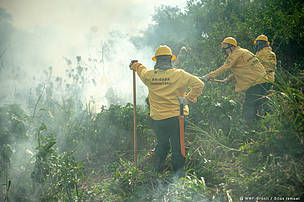 “The fire is close! Oh, Jesus, don't you have a fire brigade, someone who can come with an emergency now? Look over there, it's getting closer over time, look over there! ”. The desperate report, made in October, is from a resident of the district of Porto Esperança, located on the banks of the Paraguay River, 72 kilometers from Corumbá, MS. Earlier that month, the 48 families living in the area were threatened by the fires that consumed more than 4.4 million hectares in the Pantanal, 30% of the total area of the biome.

“It was despair, a tragedy, I have lived here for 16 years with my husband and we have never been faced with a situation of a fire so close,” recalls Natalina Oliveira Mendes, from the Porto Esperança Riverside Women Association.

In the hard-to-reach area, the solution was to rely on improvisation and the union of adults and children, who ran into the forest area, armed with buckets of water and even a tractor to contain the fire and save the animals, trapped by the flames. Elderly people were sick with thick smoke and soot. The outbreaks were only completely extinguished hours later, with the arrival of the Fire Department.

​Community training
The community is now preparing to fight future fires, this time, combining techniques and the use of appropriate fire-fighting equipment. Prevfogo, a specialized center for preventing and fighting forest fires, an organ linked to Ibama (Brazilian Institute of Natural and Renewable Resources), gave a course for the training of community brigade members.

The course is supported by Ecoa (Ecology in Action), through the ECCOS cross-border project, with support from the European Union and WWF-Brazil in which eight residents of Porto Esperança will be trained, who will be multipliers of the techniques and will be able to act in the protection of the region. Ecoa's CEO, André Luiz Siqueira, explained that the NGO organized the training, offering logistical support for the Prevfogo team and the transport of material donated by WWF-Brazil, to be used by the new brigade members.

At this first moment, as explained by WWF-Brazil's conservation analyst, Osvaldo Barassi Gajardo, 7 complete kits were donated, containing Personal Protective Equipment (PPE), uniforms and fire-fighting equipment.
Siqueira said that the involvement of partners is essential and comes at an important moment, when preventive measures are needed. "It ends up reverberating to other institutions, it shows that they need to get involved in the fire theme", he evaluated.

Aid to riverside dwellers
To reach Porto Esperança, it is necessary to travel from Corumbá, for about 72 kilometers and, afterwards, another 20 minutes of crossing the Paraguay River, from Porto Morrinho. The difficult crossing and isolation of the community attracted the attention of the head of Prevfogo's Pantanal Brigade, Ruberval Dimas do Patrocínio. He contacted Ecoa and spoke of the need to organize a community brigade. From this discussion, the course of community brigade members was defined, as a result of the already existing partnership with WWF-Brazil.

Patrocínio explains that the course taught “what works and does not work in fire fighting”. Among the techniques, the combustion break in the so-called “fire triangle”, with the three basic rules for extinguishing the fire: reducing the ambient temperature, removing the fuel (gas, gasoline, wood, coal) and/or the oxidant (oxygen, for example). The recently graduated brigadiers learned to handle blowers, burners for controlled fires (drip-fires) and dampers.

José Domingos Benites was one of the course participants. “The experience I am having is very important. If a fire breaks out again, God help us, we will know what to do until the team arrives and continue the fight ”. Amarildo Pereira Mendes quoted the techniques learned from fires on the island using the equipment. “We learned the basics to put out the fire. This is very important".

Emergency response to support the Pantanal
To support the Pantanal, WWF-Brazil, which was already involved in the training of community brigades, focused on Mato Grosso do Sul to create community brigades in Settlement 72 (Ladário), Nascente do Rio Taquari State Park, São Francisco/Paraguay Mirim Community and Barra do São Lourenço, both in Corumbá. The actions will continue until June 2021, with the implementation of groups in other locations.

For the next year, according to Gajardo, there is also a prospect of a partnership with Imasul to train 60 more brigade members and a group in indigenous villages in Mato Grosso. "It is not the solution to the problem, but it is the first response to minimize or contain the fire so that it does not become a big fire," he said, adding that it is an adaptation strategy to climate change.

The donation of equipment in the Pantanal is part of the “Emergency Response in the Field” Project. WWF-Brazil conservation analyst Cassio Bernardino says the idea is to focus on different types of action, which also involve humanitarian aid, promoting research on the impact of fires on the flora and fauna and improvements in fire management techniques. "This was an unusual year in the fire data, we identified the problem and understood that it is essential to structure this response in the best possible way". 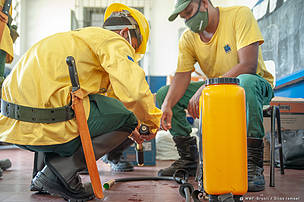 The community is now preparing to fight future fires, this time, combining techniques and the use of appropriate fire-fighting equipment
© Silas Ismael/WWF-Brasil Enlarge
Gostou deste artigo?