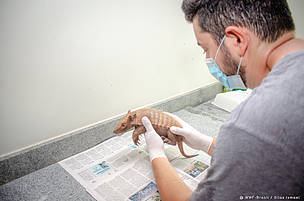 This year’s wildfires created a desolate scenario in the Pantanal, with the destruction of 30% of the whole territory, not to mention the sheer number of animals killed on its path. The help of volunteers and institutions concentrated efforts to rescue and recovery many of those animals who escaped.

At least 30 animals rescued from fires in different regions of Mato Grosso do Sul were taken to Centro de Reabilitação de Animais Silvestres - CRAS (Wild Animal Rehabilitation Center), in Campo Grande, during the most critical period of the fires, from July to September. Among them, jaguars, wolves, anteaters, macaws, tapirs, agoutis, and hawks from the Pantanal and the Cerrado areas.

The period, according to veterinarian Lucas Cazati, already sees a natural increase in the demand for care in CRAS, as it is a breeding season. However, the fires brought a new factor: the severity of the cases. Injured animals arrived with burns, from 2nd and 3rd degrees, and suffering from aspiration pneumonia, due to smoke inhalation.

Biologist Allyson Favero adds secondary victims of the fires to the list. “There are animals abandoned in the middle of the fire. Mothers that left offspring. These young animals had to rescued so that their development may continue”.

WWF-Brazil donated materials and medicines to assist in the recovery of these animals. Professionals who provide services at CRAS are already using these resources available. There are 15 animal transport boxes, 19 animal capture equipment, including tow bars, hooks, and pinions, in addition to 35 boxes of analgesics and anesthetics.

Cazati said that partnerships like the one signed with WWF-Brazil are fundamental for the development of the work of recovering wild animals in Mato Grosso do Sul. “This material will be used from hummingbirds to jaguars, all of which contributes to their rehabilitation, and in the final step, that is the release and the return of these animals to their natural habitat”.

Some medicines have already been used in the treatment of the jaguar rescued in Serra do Amolar, on November 3rd. The feline continues to recover, subject to the treatment of ozone applications, with anti-inflammatory and healing properties. It is expected that it will be released into nature in 2021.

Recovery work
CRAS, which was created in 1987, is located in the Prosa State Park area, a state conservation unit with integral protection, within the urban perimeter of Campo Grande. The center receives animals seized in anti-trafficking operations, run over on highways, and voluntarily delivered by the population. Since it was created, it has received about 300 species, including birds, reptiles, and mammals. Currently, about 200 animals are being treated at the site.

Allyson Favero explains that the animals are treated so that they can return to the natural environment. However, there are cases where they cannot be released due to the type of injury or because they have not developed the instinct necessary for survival. In this case, they can be taken to species conservation projects, research institutions, breeders, or zoos.

An example is the 1-year-old male puma lovingly called “Oncelmo”, who was taken to the center as a youngster, rescued from cane fields in Costa Rica (MS). He is docile, and as such can be easy prey in the wild, so he should probably be taken to a zoo.

WWF-Brasil support
The donation of supplies is part of the “Respostas Emergenciais em Campo - Emergency Response in the Field” Project, which started in 2019 in the Amazon and expanded this year to serve the Pantanal, due to the spike in wildfires in July.

WWF-Brazil conservation analyst Cassio Bernardino explained that CRAS was chosen from a list of potential partners who could operate resources and respond quickly. The list of orders was sent, and the supplies were acquired through resources raised in the project. "This phase came from an emergency context, to unlock what was most urgent; we want to see other needs that are strategic and can facilitate the work of those on the front lines”, he said.

In November, Bernardino and Osvaldo Barassi Gajardo, also a conservation analyst at WWF-Brazil, were at CRAS and followed the work carried out by the center's team. They also evaluated a new shipment of the material to meet demand. "Seeing the work done, seeing the efforts of many people materialized, further strengthens our relationship and gives us the drive to continue providing support,” said Gajardo.

Sending material to CRAS is part of one of the project's four axes, which are also constructed in partnerships. With the NGO Ecoa - Ecologia em Ação (Ecology in Action) and PrevFogo, WWF-Brasil develops work to prevent and fight fire by training community brigades and purchasing equipment. ICV - Instituto Centro de Vida helps by providing humanitarian aid, handing out basic food baskets, and providing support for research on the impact on flora and fauna and technical improvements in fire management in the Pantanal.

Gajardo says it will take over the next six months to develop the project, which coincides with the period in which the wildfires are prone to spike once more in the country. 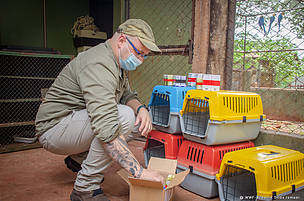 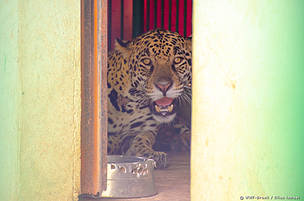 A jaguar was rescued in Serra do Amolar, on November 3rd
© Silas Ismael/WWF-Brasil Enlarge 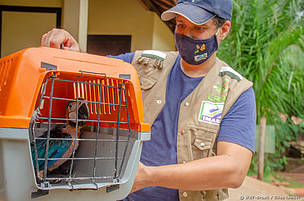 This year’s wildfires created a desolate scenario in the Pantanal, with the destruction of 30% of the whole territory
© Silas Ismael/WWF-Brasil Enlarge 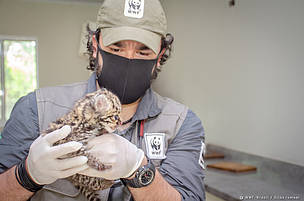 Gajardo says it will take over the next six months to develop the project, which coincides with the period in which the wildfires are prone to spike once more in the country
© Silas Ismael/WWF-Brasil Enlarge 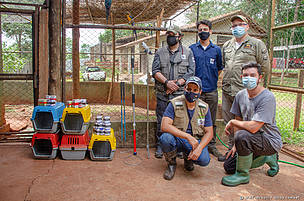