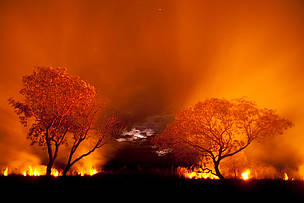 Between January 1st and July 12 this year, 2,510 fire outbreaks were detected in the Pantanal, a number 126% higher than that recorded in the same period last year, when 1,111 outbreaks occurred. This makes the biome the champion of increased fire in the 2020 season.

The Pantanal is an ecosystem in which fire is part of its natural dynamics, being the main tool for the renewal of native pasture, favoring the regrowth of many species.

However, the occurrence of fires out of control in the drought is of anthropogenic origin (caused by man in an organized way - usually provided for by law - or disorderly) and is directly related to deforestation, cleaning and reforming pastures. Inadequate practices and the use of fire as a management tool without control techniques are elements that endanger the conservation of the largest tropical humid area on the planet.

Drought as an aggravating factor
Since the beginning of 2020, the Pantanal has been hit by a severe drought. From January to May, the volume of rainfall was 50% below normal. Without enough rain to fill wetlands, the biome was more susceptible to fires.

“The government of Mato Grosso do Sul, the state's Interinstitutional Committee for the Prevention and Fighting of Forest Fires for  and civil society (through the Observatório do Pantanal) have been meeting to develop prevention and contingency actions. Working together is of paramount importance, both for the alert of society about the human and environmental damage from the burns in the three countries where the Pantanal is located (Brazil, Bolivia and Paraguay) and for the integrated work of monitoring and fighting forest fires. Fire does not respect borders ", says Julia.

The problem was further worsened because 2019 had already been a dry year in the Pantanal and water stress has accumulated. To make matters worse, the La Niña climate phenomenon, expected later this year, tends to further reduce rainfall in the region. This could result in the greatest drought in the biome for the past 30 years, according to experts, in the midst of the season of intensified fire outbreaks.

In this current moment of Pandemic related to Covid-19, fire brings other harmful consequences to human health, such as worsening respiratory problems, irritation of the eyes, in addition to allergic processes and the discomfort generated in people's daily lives.

Because it is a humid forest, the Amazon is not a biome with a characteristic of self-combustion (spontaneous fire). In other words, the forest only catches fire in dry areas, where trees were cut and the fire was caused by human action. Burning is a widely used method to clear deforested land. This deforestation, in turn, is linked to the practice of land grabbing. After the forest is cleared, the wood is left drying for a few months and then it is set on fire to make room for pasture or agriculture - or for real estate speculation involving land theft.

In the accumulated result for the year, between January 1st and July 12, the Amazon - where the efforts of the public authorities in combating fire are concentrated - registered 8,846 fires: a 23% decrease compared to the same period in 2019, when 11,515 fires occurred.

Despite the reduction compared to last year, the number of fires in the Amazon has increased compared to historical averages for the same period. The explanation for this is that 2019 had an extraordinarily incendiary first semester. In the period up to July 12, 2019 was the second year with the most fires in the Amazon in a decade, behind only 2016, when 12,947 outbreaks were recorded.

Cerrado
In the period between July 1st and July 12, the Cerrado had 1,800 fires, an increase of 16% compared to the same period last year, when 1,549 fires were recorded.

As in the Amazon, despite the drop in comparison to 2019, the number of accumulated burnings in the Cerrado in 2020 is also above historical averages. The number of fires in the period between January 1st and July 12, 2020 exceeded the average of the last 10 years by 6% in the Cerrado. Considering the average of the last three years, the increase was 11%.

Contrary to what happens in the Amazon, the Cerrado has a higher frequency of natural fire outbreaks. Fire in the Cerrado is considered a natural disorder, part of the biome's dynamics. Natural fires can be important for the maintenance of ecological processes and biodiversity, as occurs, for instance, in the savannas of Africa or in the forests of the coast of California. This is possible because, throughout evolution, the Cerrado vegetation has adapted to seasonal fires. Because of the thick barks, the trees do not have their core affected by the fire and they sprout again quickly.

Despite its good adaptation to fire, the Cerrado is damaged by human made fires - which are used in the biome especially to stimulate the regrowth of pastures and to open new agricultural areas. These human-caused fires lead to a loss of nutrients, compaction and soil erosion, a serious problem that affects huge areas.

Depending on the climatic conditions, these fires tend to intensify, generating extremely high temperatures that can eliminate vegetation completely, in addition to degrading the soil. Besides, with the purposeful use of fire, the frequency of fire outbreaks is excessive and there is no time for the shoots to produce the protective bark that allows the tree to survive the annual natural fires.