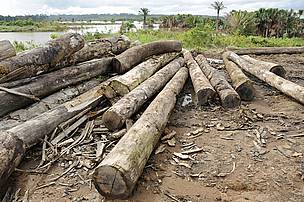 Data from the National Institute for Space Research (Inpe) released on Friday indicate that from January 1st to June 30 this year, 3,070 square kilometers of forest were cleared, 26% more than the same period last year. The figures refer to the 11,822 deforestation alerts in the first six months of the year. In June alone, 1,034 km2 were deforested, an area 11% higher than June 2019.

It is the worst result for the first semester at least in the last decade, noting that there were changes in the Deter system methodology in 2015. It is also the second consecutive year of increased devastation in the forest since Jair Bolsonaro took office, after being elected with a speech in which he waved to loggers, land grabbers and illegal gold diggers, the main agents of deforestation in the Amazon.

"Even if not even a square meter is burned in the current fire season that runs until September - as the Brazilian Vice President Hamilton Mourão expects with his proposal of a fire ban in the Legal Amazon this year - the greatest damage has been already done" , says WWF-Brazil's Director of Conservation and Restoration, Edegar Rosa.

Whether all the cut vegetation will turn to ashes - worsening atmospheric pollution with smoke and aggravating the population's respiratory problems at the height of the Covid-19 pandemic -, depends on how the reaction on field will be. "The fact is that a huge part of the Amazon rainforest is already on the ground," says Edegar Rosa.

“Inpe's warnings were registered on private properties and public lands, but the astounding thing is that deforestation also occurred in Conservation Units, where there should be more control and strictness,” says Mariana Napolitano, manager of WWF-Brazil for Sciences.

The most deforested conservation units were the National Forests (Flonas) of Jamanxim and Altamira, the Environmental Protection Area (APA) of Tapajós, and the Nascentes da Serra do Cachimbo Biological Reserve, all them in Pará state. Inpe was already indicating high deforestation in these areas. Even so, the inspection did not arrive in time to prevent the disaster, although the government has early access to the data.

Reactions
In the season that goes from now to September - which is historically critical for the fire outbreaks in the region - it was predicted a repetition of the flames that took over the Amazon last year and darkened the sky in São Paulo, blazing Brazil's image abroad. The reaction of foreign investors and Brazilian businessmen to the uncontrolled deforestation in the Amazon came one year later.

Last month, 32 international investment managers, which mobilize US$ 4.5 trillion, pointed out in a letter sent to Brazilian embassies abroad “generalized uncertainty about the conditions to invest or offer financial services in Brazil” as a result of the increase in deforestation in Amazon.

This week, leaders of 38 large companies and four sectorial entities operating in the country asked in a letter to the president of the National Council of the Legal Amazon, Brazilian Vice President Hamilton Mourão, action against deforestation, among other measures that include decarbonization of the economy and support to traditional peoples and communities. Yesterday (July 9), Mourão went to explain himself to investors during a videoconference. The Senate also called Bolsonaro's VP to give explanations to Parliament. The meeting will take place on July 14, also by videoconference.

Performance
One of the lasting doubts regards the effectiveness of the action taken by the Armed Forces in the Amazon through a Law and Order Guarantee operation in the context of the Brasil Verde-2 operation. This is a repetition of last year's initiatives, when the government attempted to ban the fire, and performed flashy oversight actions, putting Ibama - which has authority to impose fines and to seize materials used in environmental crimes - in an adjunct role.

Even though the government announced R $ 60 million as an "initial contribution" to execute the operation, the performance is viewed with distrust. The Prosecution Service even asked the Federal Audit Court to open a case in order to investigate the financial execution of the operation. Prosecutors want to know if the money is being spent “in a way that serves public interests, efficiently and responsibly”.

A report by the local newspaper O Estado de São Paulo revealed earlier this month that the military operation in the Amazon to reduce deforestation had committed - namely, had effectively used - only BRL 2.3 million from the budget, that is 3.8% of the total planned. Out of the amount committed, only BRL 454,000 had already been paid, less than 1% of the amount.

Also according to the newspaper, in a statement sent this week to Ibama's situation and control room, field agents reported that, since last Friday, July 3, the Army, through the 51st Jungle Infantry Battalion, “suspended the support for actions to dismantle sawmills in the municipality of Uruará (PA), as scheduled by the actions of Law and Order Guarantee in this region”.

The stoppage, confirmed by Ibama, wastes public money. Servers pay hotel and food allowances, but do not do the job, while loggers dismantle bases to escape inspection. Before Law and Order Guarantee in the Amazon, Ibama, without the tutelage of the military, achieved better performance.

It happened in the Ituna-Itatá Indigenous Land, in Pará state. Targeted by land grabbers since 2017, the reserve lost 17,000 football fields of the forest until last year. With intelligence actions, Ibama inspectors managed to contain the crime. Now the personnel led by Hamilton Mourão are in control.