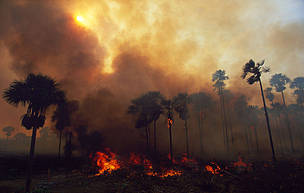 The number of fire outbreaks between 1st and 30 June 2020 is the highest in the last 13 years in that period.
© Nigel Dickinson/WWF-Canon 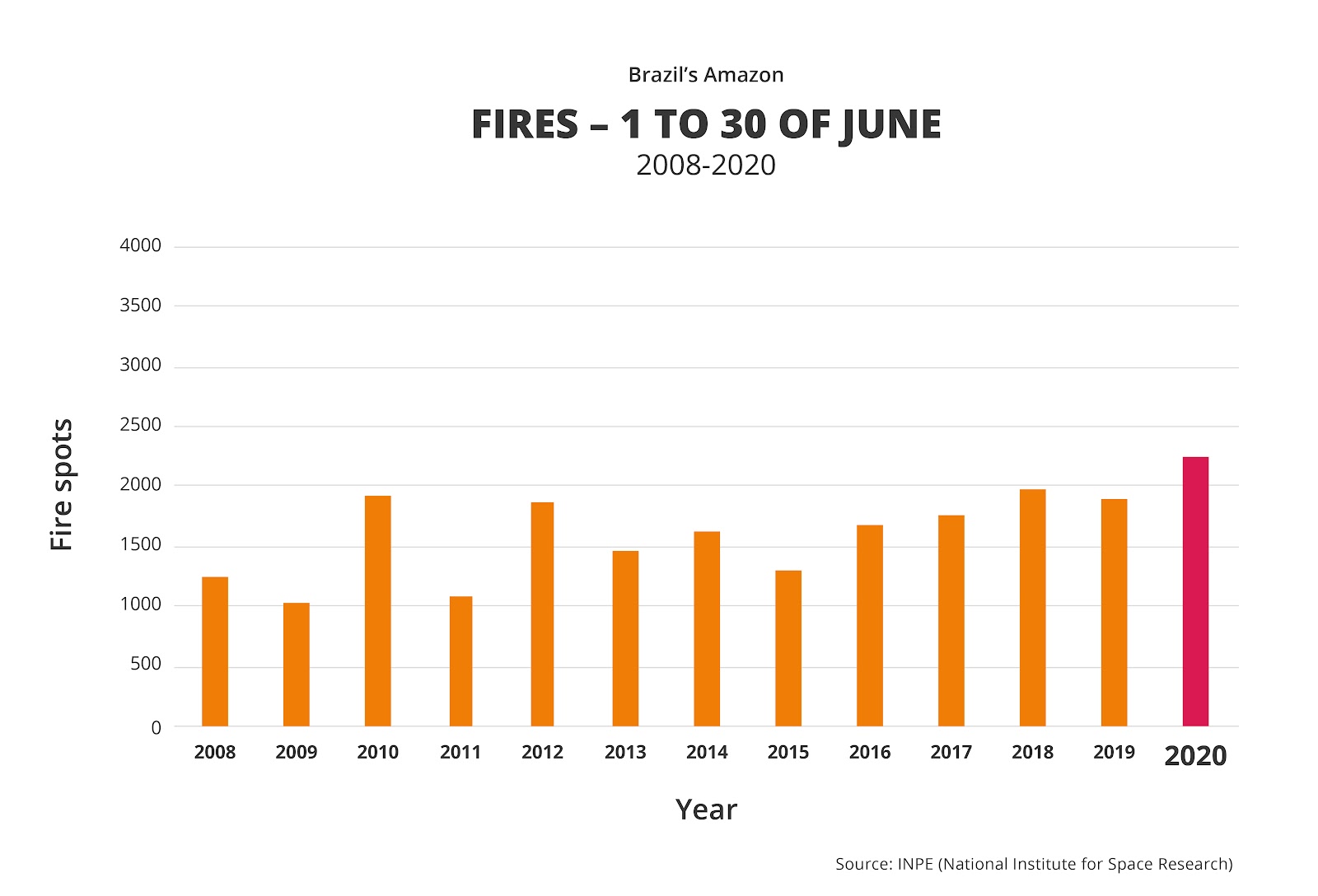 “The first numbers for June are worthy of attention, since the driest season is only just beginning, and the GLO (Federal government’s action with Armed Forces participation) is operating in the Amazon,” says Mauricio Voivodic, executive director of WWF-Brazil. "Furthermore, the context is worrying: high rates of deforestation, disrespect for indigenous rights and the public health calamity with the coronavirus pandemic."

“We cannot allow the 2019 situation to repeat itself, in which, due to lack of government’s command and control, it was possible to have the Day of Fire in the south of Pará state. The government can and must take immediate measures, such as releasing the use of fire only by traditional populations, forbidding the practice of burning for other uses”, says Voivodic, recalling that the hiring of brigade members from PrevFogo (National System for the Prevention and Fighting of Forest Fires) is still in the beginning and the time for preventive work is already over.

Between January 1st and June 18, 2020, there were deforestation alerts for 2,645 km2 in the Legal Amazon, the highest number recorded for the period since 2015. And the clear cut in the Amazon forest continues to rise, with 610 km2 of area in deforestation alerts in the first 18 days of June.

The threat is that this year's deforestation exceeds the 10,129 km2 measured last year, the highest rate since 2008 and more than double the rate measured in 2012.

“The states with the highest accumulated deforestation between June 1st and June 18 (Pará, Mato Grosso, Amazonas and Rondônia) were also those in which the number of fires in the first half of 2020 exceeded 2019”, says Mariana Napolitano, manager of WWF-Brazil.

The government's authorization to employ the Armed Forces in the operation of the Law and Order Guarantee (GLO) with the aim of inhibiting deforestation and fires in the Amazon, which started in May this year and was extended until the end of July, has not yet had the expected effects.

The performance of the Armed Forces in the Amazon has been classified by Ibama inspectors as "clumsy, inexperienced and even malicious," according to some environmental inspectors.

There is also a government delay in hiring fire brigades to combat fires, which may further worsen the 2020 scenario. In addition to putting out fires, brigades have a role in preventing flames with actions taken before the drought period - and for that Ibama usually starts hiring teams from April. In 2020, however, the contract notice for the Ibama’s PrevFogo brigades only came out on June 16, and the next day, a new ordinance annulled the process, invalidated by an error in the process. The announcement that will hire 843 professionals for the PrevFogo teams was only published on the 23rd.

The fires worsen air quality, worsening the health risks of populations living in the Amazon and who are already under the pandemic of COVID-19. According to a study by Fiocruz (Oswaldo Cruz Foundation), one of the consequences is the increase in the number of children hospitalized - the number doubled between May and June 2019, with an additional 2,500 more hospitalizations per month in 100 municipalities in the Legal Amazon. In addition, the study points out, pollutants can travel vast distances and affect cities that are far from where the fire originated.

Amazonian cities have already faced the first peak of the pandemic. The North region has the highest mortality rates (48.6) and contamination (1234.7) of the new coronavirus per 100 thousand inhabitants in the country.

We provide both immediate support for fighting fires and continuously against deforestation. WWF-Brazil's main objective is to support local forest guardians so that they have the conditions and training to monitor threats, such as deforestation and invasions of territories that have led to an increase in fires.

In the specific context of Covid-19, more than 30,000 people - indigenous and agroextrativist – have received food, hygiene products, and equipment in the Amazon and Cerrado.

The number of fire outbreaks between 1st and 30 June 2020 is the highest in the last 13 years in that period.
© Nigel Dickinson/WWF-Canon Enlarge
Gostou deste artigo?