Positioning note: a minister who plans to act illegally is unacceptable | WWF Brasil

Positioning note: a minister who plans to act illegally is unacceptable 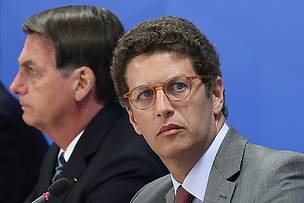 Ricardo Salles
© Palácio do Planalto/Wikimedia Commons
An awaited decision by the Brazilian Supreme Court (STF) authorized on Friday, May 22, the full public release of a video of a cabinet meeting of Jair Bolsonaro's government. The two-hour video, recorded in a meeting that took place on April 22, is part of an inquiry into allegations that the president was trying to illegally interfere in a criminal investigation of his son, a claim made by the former justice minister Sergio Moro when he resigned last month.

In the video, attention was drawn the shocking statements made by Environment Minister Ricardo Salles, who expressly manifested his intention to take advantage of the Covid-19 pandemic to "approve regulatory and simplification infralegal reforms" in the environment and "go by with the catlle drive" - alluding to an expression in Portuguese that gives the idea of ​​opening the gates so that all the cattle pass and not just an ox, and meaning that he wants a mass dismantling of regulations.

See below WWF-Brazil's positioning on the minister's statements.

WWF-Brasil goes public and expresses its indignation at the strategy of destroying the legal framework for protecting the environment in Brazil, evidenced by the speech of the Minister of the Environment, Ricardo Salles, during a ministerial meeting held on April 22 and released in the afternoon this Friday, May 22nd.

It is not surprising that Minister Ricardo Salles has been working, since the beginning of his term of office, to weaken the rules and institutions created to defend our environmental heritage. It is not by chance that 2019 was the year with the greatest deforestation in the Amazon in one decade, and this year's data show that we will surpass this mark. Administrative paralysis in his ministry and the bodies associated with it is notorious. Despite this, it is shocking to note his intention to take advantage of the greatest economic and health tragedy in many generations, a pandemic that has already resulted in tens of thousands of lives lost, in order to, in his words, 'go by with the cattle drive'.

Minister Ricardo Salles' speech exposes his awareness that what he is proposing is illegal, and therefore resents the threat that Justice can bring to his intentions. He exposes that he acts against national interests, in silence, oblivious to a wide-ranging discussion that encompasses society's yearnings.

Brazil needs a minister who is on a par with the importance that the Environment has for the country. It is essential that the appropriate legal provisions are applied.