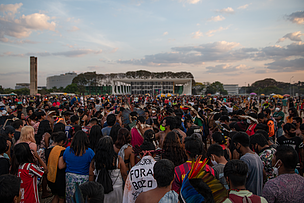 Indigenous peoples follow the judgment of the time frame thesis in the STF and protest against a hundred bills that are being processed in the National Congress that threaten their rights.
© Matheus Alves / WWF-Brasil

Justice Alexandre de Moraes asked to review the records. The score is 1 x 1, but there is no set date for the resumption of discussions in STF

The most important judgment in recent decades for populations from all over Brazil was suspended on Wednesday (9/15). The Justice Alexandre de Moraes, from the Federal Supreme Court (STF), asked to review the records. There is no scheduled date for the resumption of discussions. Moraes explained that the Justice who preceded his vote, Kassio Nunes Marques, raised aspects that deserved a “more detailed analysis”. The legal coordinator of Articulação dos Povos Indígenas do Brasil (Apib), Eloy Terena, considered the lack of a deadline for the continuation of this debate to be "a very tough aspect", as the indecision on the subject has not only generated suffering for the indigenous peoples, but it can also stimulate invasions.

STF is judging Extraordinary Appeal 1.017.365, which deals with the time frame argument, a thesis according to which only the people who occupied or disputed a piece of land on October 5, 1988, the date of the promulgation of the Federal Constitution, would have the right to it. Nunes Marques, appointed Justice last October by President Jair Bolsonaro, voted in favor of the time frame thesis. “Possessions subsequent to the promulgation of the Federal Constitution cannot be considered traditional, because that would imply the right to expand them unlimitedly to new areas that have already been definitively incorporated into the national real estate market”, he argued.

The thesis completely ignores the situations of expulsion undergone by populations and invasions of villages by land grabbers and loggers. “A very retrograde vote, the ultimate expression of the interest of agribusiness. Extremely aligned with the government and agribusiness”, emphasized Eloy Terena.

Attorney Samara Pataxó, who made one of the 21 oral arguments against the time frame thesis in STF, said that Nunes Marques' vote was already expected. She highlighted the divergence with the vote of the rapporteur, Justice Edson Fachin, who reaffirmed the original nature of indigenous constitutional rights, considering them as “indelible clauses”, that is, which could only be changed with a new Constitution. The trial was stopped with 1 x 1 on the scoreboard.

Samara was emphatic during her oral argument in STF, on September 1st, the date in which the debate began: “Isn't it enough historically to have imposed a language, a faith, a civilization on us? They still want to impose on us a pattern of society, a pattern of development, a pattern of progress, and they also want to limit, interfere, dictate the patterns of our usufruct, and the enjoyment and enforcement of our territorial rights, even though these rights are enshrined in the Constitutional Charter as a permanent clause”.

The attorney stressed that Nunes Marques' vote "disregarded the indigenous people" and saw him as "an outdated institute, as something that brings legal uncertainty." The indigenous thesis, enshrined in the 1988 Constitution and questioned by the current rural caucus in Congress, belongs to Justice João Mendes Junior, who, at the beginning of the 20th century, considered the lands traditionally occupied by indigenous peoples as a congenital right, prior to the actual creation of the Brazilian State, which should only demarcate and declare the spatial limits of these territories.

Since Jair Bolsonaro's campaign for the Presidency, he has made his position on indigenous issues clear. “There won't be an inch more in terms of demarcation”, Bolsonaro repeated. And he is keeping its promise. Since he took over, all demarcation processes have halted. There are rare exceptions, by court order.

Indigenous peoples remain mobilized against the time frame and a hundred bills that are being processed in Congress, which threaten demarcations and open territories for economic undertakings. The demonstrations were not restricted to the federal capital, they also took place on roads and municipalities in all regions of the country.

Among the peoples who were present in Brasília there are the Munduruku, from Pará, one of the most affected by gold mining in the Amazon. “Miners destroy everything. Nowadays, the indigenous people can no longer drink clean water. Children have to drink dirty water. Children don't even know what water used to be like. The destruction starts in the water of the river, making noise, scaring the fish, making noise at the bottom of the river. They tarnish the sacred river, the mother of water, of the fish, the mother of water of the tracajá, who are the protectors of the river”, reports chief Geilson Karo, from the Karowaxetbu village, located on the banks of the Tapajós river.

A study conducted by Fiocruz and WWF-Brazil assessed the impacts of mercury contamination, which is widely used in gold mining activities, on 200 inhabitants of three villages in the Sawré Muybu Indigenous Land (IL), which is traditionally occupied by the Munduruku people, in the vicinities of the Tapajós river. The results indicated that all research participants had been affected by this contaminant. Of every 10 participants, 6 had mercury levels above safe limits: about 57.9% had mercury levels above 6µg.g-1 – which is the maximum safety limit established by health agencies.

Contamination is greater in areas most impacted by mining, in villages on the banks of the affected rivers. In these locations, 9 out of 10 participants had a high level of contamination. Children have also been impacted: about 15.8% of them showed problems in neurodevelopment tests.

Mining is one of the greatest threats to indigenous people today, but it is not the only one. So much so that, last week, at least 5,000 women from 185 peoples participated in the II March of Indigenous Women, in one of the most powerful mobilizations the federal capital has ever witnessed. They expanded the demands of two other indigenous camps: Levante Pela Terra, which took place in June, and Luta pela Vida, which began in August, both to monitor the processing of bills that threaten their rights in Congress and the judgment of the time frame thesis by STF.

Indigenous peoples follow the judgment of the time frame thesis in the STF and protest against a hundred bills that are being processed in the National Congress that threaten their rights.
© Matheus Alves / WWF-Brasil Enlarge
Gostou deste artigo?