Indigenous women protest for their rights 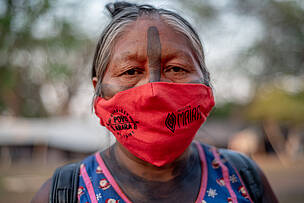 Tuíre Kayapó, one of the strongest symbols of the Brazilian women's indigenous struggle, was in Brasília
© Jacqueline Lisboa / WWF-Brasil

At least 5,000 representatives of 185 peoples were in Brasília between September 7th and 11th, in one of the most powerful mobilizations the federal capital has ever witnessed

One of the strongest symbols of the Brazilian women's indigenous struggle, Tuíre Kayapó, puts on a smile that hides under her mask and extends to her hands in an affectionate greeting. She doesn't let questions be asked without first pointing out that she is annoyed by journalists who misrepresent her words. She also doesn't like having her words be written down, but speaks generously in Mebêngôkre, from the Jê linguistic family, as she looks closely and directly into our eyes. Anthropologist João Lucas Moraes is willing to translate her words. According to studies by the ISA (Socio-Environmental Institute), public speaking is a social practice valued by these people, who consider themselves as “those who speak well, beautifully (Kaben mei)”.

The Kayapó warrior is one of the 5,000 participants from 185 people who attended the second March of Indigenous Women, from September 7th to 11th, one of the most powerful mobilizations that the federal capital has ever seen, which brought speakers of more than a hundred languages. On Friday (10), the group took an 11-kilometer walk in the central region of Brasília, expanding the demands of two other indigenous encampments: “Levante Pela Terra”, which took place in June, and “Luta pela Vida”, which started in August, both to monitor the processing of bills that threaten their rights in Congress and the judgment, by STF (Supreme Federal Court), of the timeframe thesis, which will affect land demarcations in the country. They drew attention to issues that concern women.

Tuíre gained international notoriety in 1989, when at a meeting of Xingu peoples, in Altamira, Pará, she put her machete in the face of the then president of Eletronorte, José Antônio Muniz, for being against the construction of the hydroelectric plant called Belo Monte. Now an elderly woman, explains that the gesture sought to say, “I am here, and I am defending the forest”. The leader tells WWF-Brazil that, at that moment, she remembered the warriors in the fight for nature, her maternal grandfather, Betikre, who had a huge part in its creation, and her paternal grandfather, Prïnkôre, from whom she heard stories from her grandmother about her struggles for conservation of the woods. She lives in the Las Casas Indigenous Land, in the Tekrejarôtire community, in Pará, and says that she is in Brasília to fight for the lives of her children, grandchildren, and clean water. “The forest is also for animals. And that's what we're still fighting for,” she says.

Last week's mobilization was promoted by Anmiga (National Articulation of Indigenous Women Warriors of Ancestry) and was focused on the theme "Original women: Reforesting minds for the healing of the Earth", to call humanity to a possible new form of relationship with the Mother Earth and among people. “This is the only way for us to keep our bodies alive”, says a note released by the institution, with the support of Apib (Articulation of Indigenous Peoples of Brazil).

“In every country on the planet, the impacts of the climate and environmental crisis associated with the effects of the greatest pandemic in history generate staggering numbers of deaths and new hordes of excluded and suffering people. Hunger, unemployment, racism, LGBTphobia, and sexism put millions of people in a situation of extreme vulnerability and deplete resources to protect themselves”, the note says. According to Anmiga, these are the results of unsustainable exploratory projects, which push the entire world to the point of no return, compromising human existence.

“We want to reforest not just the land, but the minds and hearts,” says Célia Xakriabá, of the Xakriabá people, from Minas Gerais. During the launch of the Reflorestarmentes platform, which organizes ancestral knowledge and technologies, she mentioned the need to “sow actions for environmental justice, murdered territories and territorial bodies”; and she said that regional, national, international, and territorial groups that have the same objective will be mapped, citing as an example the communicators' groups Mídia India and Mídia Ninja as “virtual territories” that collaborate to “break the standardization of communication”.

The women's camp in Brasília had a solidary visit by foreign indigenous women and institutions such as Coica (acronym for Coordination of Organizations of the Amazon Basin in Spanish), which Coiab (Coordination of Indigenous Organizations of the Brazilian Amazon) is part of. “The problems in Brazil are the same as those of native peoples around the world”, said Amalia Hernandez, of the Lenka people of Honduras. Lineth Calapucha, of the Kichwa people, added that in Ecuador it is also the oil, mining, and logging companies that pose threats of genocide. “We have customs and ways of life that are not understood, but we are empowered so that the fight continues”, she emphasizes.

María Cuji, leader of A Mulher Kichwa, cites the historic march carried out by mothers and grandmothers in 1992, who remained in Quito for an entire month in the struggle for land. Currently, the people have land titles, but women need to remain mobilized to defend against invaders who want to exploit natural resources.

In 2018, the Kichwa of the Sarayaku community held a ceremony in the Ecuadorian capital, declaring 135,000 hectares of their territory as a "living jungle", which aimed the government recognition of them as a "living being" aware of rights, with new measures sustainable conservation initiatives not only of the forest in the material sense but also including beings from the animal, plant, mineral, spiritual and cosmic worlds that relate to humans.

Tuíre Kayapó, one of the strongest symbols of the Brazilian women's indigenous struggle, was in Brasília
© Jacqueline Lisboa / WWF-Brasil Enlarge 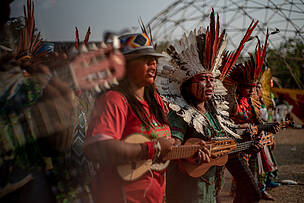 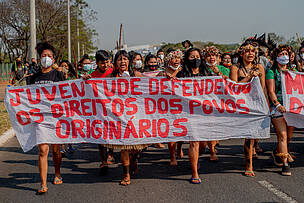 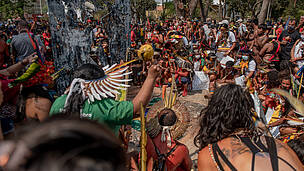