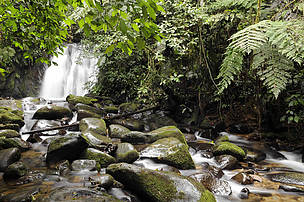 Parque Estadual Intervales, São Paulo
© WWF-Brasil / Adriano Gambarini
May 3rd, 2020 – On May 1st, Labor Day in Brazil and many parts of the world, the Brazilian security guard Damião Cristino de Carvalho Júnior lost his life when carrying out his work in defence of the Intervales State Park in Sete Barras, state of São Paulo, Brazil, according to a condolence note from the Fundação Florestal (Forestal Foundation, organism linked to Environmental Secretary of São Paulo).

The group of undersigned organizations express their solidarity with his family and colleagues and strongly outrages to the escalation of violence and illegality in the socio-environmental cause, which is happening from north to south of Brazil and is killing innocents, as has just happened in São Paulo.

According to information from the Fundação Florestal, on May 1st there was an integrated operation by the Tactical Force of the Environmental Police Squad of the city of Registro, in the state of São Paulo, with the participation of Intervales State Park Inspection team. The objective was to monitor an area where, in April, clandestine mining activity had already been dismantled. The operation found out a new mine, where new equipment for illegal activities had been delivered by helicopter.

The offenders were surprised at the scene and responded with gunshots fires. One person was arrested, and the rest fled after exchanging shots with the police. One member of the operation, the guard Damião Cristino de Carvalho Júnior, was shot in the head during the conflict, and another park ranger was shot in the leg. After two hours of the gun shooting, the team managed to stay in a safe place, but, since it is a remote area with difficult access, the rescue was only possible the following morning. The wounded were hospitalized and, unfortunately, Damião did not survive.

The protection of Protected Areas (PAs) such as Intervales State Park depends mainly on park rangers, professionals who are prepared and trained to carry out management programs in these areas. They are the fundamental link between public policies and local communities in the areas where they perform their work.

The management of PAs in Brazil is suffering from the reduction of staff and the precariousness of the infrastructure of environmental protection systems. It results in creating even higher pressure on park rangers and outsourced surveillance services that are at the front-line of Brazil’s natural heritage protection.

The crime that occurred on this Labor Day shares the same characteristics of the escalation of violence and the destruction of natural resources that we see from north to south of Brazil, from the Amazon to the Atlantic Forest. The speech and actions of the Brazilian federal government strengthen the permissiveness of illegal invasions for clandestine activities such as mining, which generate practically irreversible environmental impacts in areas designed to preserve nature and the well-being of society as a whole.

This act of violence against people’s lives and the little remaining of the Atlantic Forest happens shortly after the release of a new federal government decree that may reduce the protection to the Atlantic Forest (the most destroyed biome in Brazil and where Intervales State Park is located) to benefit the interests of the real estate sector. According to the local website Direto da Ciência, the proposal of the Minister of the Environment Ricardo Salles, whose draft is already in the Civil House of the Brazilian Presidency, intends to amend Decree 6.660, of 2008, which regulates the Atlantic Forest Law (Law 11.428, of 2006). The idea is to maintain legal protection only for typically forest formations, which can reduce the biome’s protection by 10%.

Escalation of violence with murders of community leaders; increased deforestation, invasions and illegality; the recent dismissal of inspectors from Ibama (from Environmental Ministry); dismantling of the country’s natural heritage protection systems. While the whole world prioritizes the fight against the biggest pandemic of the last 100 years, it is regrettable that Brazil suffers even more with government actions as lethal as the virus.

We need to protect and support the professionals who defend Brazil, and not place them in conditions of higher risk in carrying out their work.


About Intervales State Park
Located in the core area of ​​the ecological corridor of Paranapiacaba (Contínuo Ecológico de Paranapiacaba) and with an area of ​​41 thousand hectares, the Intervales State Park protects, along with other conservation units, the second and most important Atlantic Forest ecological corridor in the state of São Paulo. It houses an extensive water source area, archaeological sites, more than 150 catalogued caves (main attractions) and 123 species of fauna and flora threatened with extinction, including mammals, such as the ocelot, jaguar and woolly spider monkey (largest primate in the Americas). Another attraction is the observation of more than 300 species of registered birds, such as the rare black-fronted piping guan. The territory was listed in 1985 by the Council for the Defense of Historical, Archaeological, Artistic and Tourist Heritage (CONDEPHAAT) and was declared an Atlantic Forest Biosphere Reserve in 1991. In 1999, UNESCO recognized it as a World Natural Heritage Site. The name Intervales corresponds to the term “between the valleys”, referring to the location of the Park’s headquarters, on the border of the hydrographic basins of the rivers Ribeira de Iguape and Paranapanema, at the top of Serra de Paranapiacaba. Source: Protected Areas from São Paulo State Guide