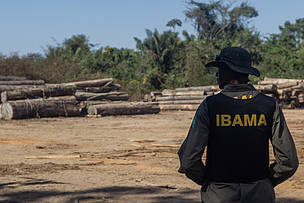 The attitude confirms a damning trend that has become a hallmark of the Brazilian federal government, which is the surge of layoffs of civil servants for the simple fact of doing their duty. They are public servants who, instead of being fired, should be awarded.

On the contrary, once again in this action, the winners are the lawbreakers: the land grabbers and the invaders of indigenous lands, protected by a government that should fight them. The government actions are establishing a carte blanche of impunity to crimes, authorizing all kinds of illegalities not only in the Amazon but in all regions of the country.

While the Bolsonaro government protects and rewards the outlaws, the whole of Brazilian society pays the price of increased deforestation, arson, invasion and land grabbing of our forests, while trying to save ourselves from the effects of the Covid-19 pandemic.

It is important to remember that this action took place within the context of combating the spread of coronavirus contamination in indigenous communities since invaders are also responsible for transmitting the disease.

Cases of invasions of indigenous lands soared in Brazil under the Bolsonaro government. Thousands of illegal miners threaten isolated, highly vulnerable communities. Official data also show an alarming increase in deforestation rates in recent months, while the pandemic is undermining inspection and control.

The layoffs at Ibama are part of a set of actions by the Bolsonaro government to decimate indigenous communities. Soon after the inspection operation that caused the dismissal of civil servants, the Fundação Nacional do Índio (Funai) issued the Normative Instruction 09/2020 that, in practice, legalizes the illegal occupation of indigenous lands, allowing the invasion and commercialization of areas that are approved.

The Brazilian federal government, with the support of the Ruralist Bench, is still trying to reward land grabbers with the approval of Provisional Measure 910 (MP910), under discussion in the National Congress. Known as the Land Grabbers’ Bill (MP da Grilagem), the rule provides for the legalization of large areas of land illegally invaded by December 2018.

These are setbacks that offend the entire nation, which exposes thousands of Brazilians to death, threatens our future generations and still damage Brazil’s image in foreign trade and weaken our sovereignty.

While the whole world prioritizes the fight against the biggest pandemic of the last 100 years, it is regrettable that Brazil suffers even more with government actions as lethal as the virus.