Alter do Chão: charge without evidence is attack on the Constitution 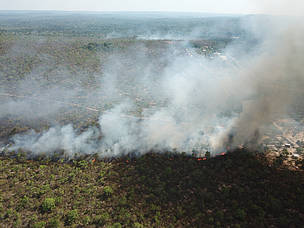 Fires in the Alter do Chão region
© Brigada de Alter do Chão
WWF-Brazil has publicly expressed its outrage at the Civil Police action in Alter do Chão, on November 26th, 2019, when unfounded charges were made against organizations that support the firefighting in the region this year. And also on the maintenance of the preventive detention of four brigade members, which was not relaxed at the custody hearing that took place this morning, November 27th.

The lack of transparency about the investigations, the lack of foundation of the allegations that have been used and, consequently, the doubts about the actual legal basis of the procedures adopted by the authorities against the accused persons, including the entry and collection of documentation at the headquarters of the Saúde e Alegria Project and the Aquífero Alter do Chão Institute -  where the Alter do Chão Brigade operated -, are extremely worrying from the point of view of democracy and clearly constitute abusive measures.

The Saúde e Alegria Project, together with many civil society organizations, denounced the land grabbers and the allotments that threatened the environmental protection areas of Alter do Chão. The members of the Brigade made the complaints, bringing information to investigators, including images of burnings.

Corruption has always been a major cause of the destruction of the Amazon and of the fires in the region, involving land grabbing, violence against local communities and indigenous peoples, wood theft and many other illegal activities. What is expected from the different levels of government is the courage to solve the problem of fires and real estate speculation in the Alter do Chão region.

WWF-Brazil repudiates the attacks on its partners and the lies surrounding its name, such as the series of digital network attacks based on lies, such as the purchase of photos linked to a donation by actor Leonardo DiCaprio.

As WWF-Brasil already reported in a statement on November 26th, there was no purchase of images from the Alter do Chão Brigade. The provision of pictures by any partner of the organization is inherent to the verification of the actions taken, critical to the accountability of the resources received and to their destination under the Technical-Financial Partnership Agreements.

The role of civil society organizations such as WWF-Brazil is to provide transparency to conflicts and solutions that support the country's sustainable development, through contents such as reports, photographic records, research, studies, infographics and maps. Also to this purpose, in September this year, WWF-Brazil performed a flight over the Amazon to take images, later used for communication actions and released to the press to show the extent of the burnings.

In the critical moments of the dramatic advancement of the flames throughout the Amazon, Cerrado and Pantanal, WWF-Brazil focused its efforts on supporting local entities involved in fighting the flames and defending indigenous territories and other protected areas. All resources received in a global solidarity network were fully passed on to local organizations.

Among the support actions made, the amount of R $ 70,654.36 was fully transferred in the Technical-Financial Partnership Agreement with the Aquífero Alter do Chão Institute in order to enable the prompt purchase of equipment to the Brigade. This organization was selected because it has been working supporting firefighting in partnership with the Fire Department since 2018.

This agreement was signed in October 2019 and is effective until March 2020. The first rendering of accounts with the presentation of technical and financial reports by the Aquífero Alter do Chão Institute is scheduled for next month.

WWF-Brasil expresses its confidence in this organization, which has been collaborating since the beginning of the police investigations about the origin of the fires outbreaks in Alter do Chão, having been heard by the Civil Police, and providing information and documents to police authorities on a voluntary basis.