Residents of the Forest: Monkeys are the main characters of the new episode of camera-trap web series showcasing the biodiversity of the Amazon | WWF Brasil

Residents of the Forest: Monkeys are the main characters of the new episode of camera-trap web series showcasing the biodiversity of the Amazon 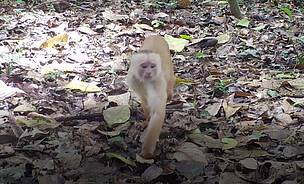 The cebus albifrons is one of the primates found inside the Chico Mendes Extractive Reserve, in Acre
© Divulgação/ WWF-Brasil
By Jorge Eduardo Dantas

The red howler monkey (Alouatta seniculus) and white-fronted capuchin monkey (Cebus albifrons) are the main characters in the new episode of the Residents of the Forest web series, which WWF-Brazil has been producing since last year. The four-minute film contains a range of facts on these animals’ characteristics against a backdrop of exclusive camera trap footage showing them in their natural habitat, in the tropical forests of the Brazilian state of Acre.

Primates, commonly known as monkeys, generally play a very important role in the regrowth of tropical forests. They contribute to seeds dispersion when they feed, spreading them throughout the forest, and their faeces not only carry the seeds but also help to fertilize the soil. This makes them fundamental in the maintenance of forest health and biodiversity. In Brazil, there are currently more than 130 different species of monkeys that can be found across the country.

The Red howler monkey (Alouatta seniculus) weighs between 4 and 9 kilos and is 57 to 72 centimetres long, with the male generally being larger than the female. It can be found in Brazil, as well as Venezuela, Colombia, Peru, Ecuador and Bolivia. It lives in the treetops, occasionally exploring the forest ground, and mainly feeds on shoots and young leaves.

It moves around very slowly, and one of its main characteristics is its call, which sounds like a roar or a bark echoing through the forest that can be heard at distances of up to 5 kilometres. This very well-known sound in the Amazon forest is often frightening to those who have the opportunity to hear it.

The white-fronted capuchin monkey (Cebus albifrons) weighs between 1.5 and 2.4 kilos and can be up to 30 centimetres long, and its tail alone can be up to 40 centimetres in length. Sightings of this species have been registered in a range of Brazil’s territories, and it can also be found in Colombia, Peru and Venezuela.

It is a social species and lives in groups of up to 15 to 30 individuals that spend most of their time in the treetops. Its diet includes fruit, nuts, nectar, small invertebrates, lizards and bird eggs. They are considered to be highly intelligent and curious, and they have a vast vocabulary of sounds and whistles that they use to communicate with the rest of their group.

Both of these species’ natural predators include the jaguar, the ocelot, the boa constrictor and birds of prey. The main threat to survival of these monkeys, however, is hunting, followed by the loss and degradation of their habitat.

The Residents of the Forest web-series was launched last year on WWF-Brazil’s official channels, and contains previously unseen footage on the biodiversity found in the Chico Mendes Extractive Reserve, located in the Brazilian state of Acre.

Some of the films that have already been released show Amazonian species such as the pacarana (Dinomys branickii) and the South American tapir (Tapirus terrestris), as well as some anteaters and members of the Canidae family.

The footage was captured using hidden cameras adapted for use in the wild, known as Camera-traps. These were concealed and attached to trees, and designed to operate using light sensors. Whenever an animal appeared in front of the equipment the camera trap automatically captured a photo or began filming it.

The effects of exploration

This Camera trap work was enabled through a partnership between WWF-Brazil and a range of other institutions, such as the Community Forest Produce Cooperative (Cooperfloresta) and the Chico Mendes Extractive Reserve’s Residents and Producers’ Association of Xapuri (Amoprex).

“The Residents of the Forest web-series contains images and biological facts on the wild animal species of the Amazon forest, and demonstrates the wide diversity of species in the community managed areas of forest in the Chico Mendes extractive reserve,” commented Moacyr Araújo, a conservation analyst for WWF-Brazil.

“The images filmed by the camera-traps allow us to understand the effects that reduced-impact forest management has on the dynamics and composition of wild fauna. This provides us with more knowledge and enables us to make technical changes to production and management activities to encourage greater diversity of wild fauna in these areas,” he added.

The cebus albifrons is one of the primates found inside the Chico Mendes Extractive Reserve, in Acre
© Divulgação/ WWF-Brasil Enlarge

The Cebus albifrons has already been registered in several territories and is also found in Colombia, Peru and Venezuela.
© Divulgação/ WWF-Brasil Enlarge 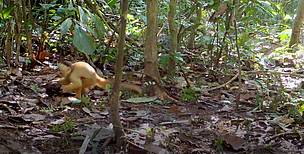 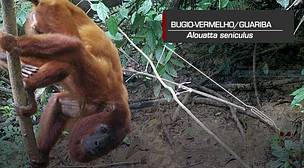 The guariba or red howler monkey (Alouatta seniculus) weighs between 4 and 9 kilos and has a length of 57 to 72 centimeters - males are usually larger.
© Divulgação/ WWF-Brasil Enlarge

The guariba monkey (Alouatta seniculus) has among its main characteristics the vocalization - it can be heard up to 5 kilometers away.
© Divulgação/ WWF-Brasil Enlarge
Gostou deste artigo?