Ever heard of Tayra or honey-eater? | WWF Brasil

Ever heard of Tayra or honey-eater? 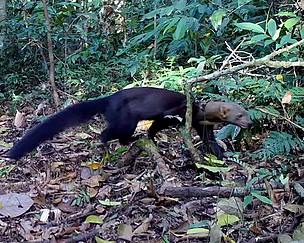 With the scientific name Eira barbara, Tayra showed up in front of the cameras traps installed in the protected Area Chico Mendes Extractive Reserve, in Acre - Brazil. The recent collected images made possible this video of the series Residents of the Forest about how the wild animals live in the Amazon Forest.

In Portuguese Tayra are know as “Irara” that comes from the junction of indigenous language terms tupis i'rá (honey) and ra (take) AKA honey-takers. However, the scientific name of the species has origin in it name in the Guarani indigenous language, Eira. In Brazil it is also commonly known as honeycomb-eater, one of its favourites foods.

Belonging to the Mustelidae (mustelid) family of carnivorous mammals such as otters, badgers and giant river otters, the species has a wide geographical distribution, occurring from central Mexico to northern Argentina. It is a typically a forest specie, sheltering in tree hollows and trunks, and in burrows made by other animals. In Brazil, the Tayra occurs in most of the territory, inhabiting mainly areas of dense forest in the Atlantic Forest, Amazon Forest, Cerrado, Caatinga and Pantanal biomes.

The species has already been registered in more than 40 Brazilian Protected Areas. The Tayra has a slender, elongated body with a long, hairy tail. Their coat can vary from light brown, to dark brown, to totally beige. However, the most common coloration is a dark brown body with beige head. The Tayra feeds on fruits, honey, insects and small or medium-sized vertebrates.

Active predator uses a sharp sense of smell to search for food and detect preys or threats. The species is very agile, which allows it to search for food both in the treetops and on the ground. The Tayras are great climbers, often seen in treetops, and are known for swimming skilfully. The daily range aTyara can travel is long, varying from 2 to 8 km per day. It is more active during the day and predominantly solitary, but it is possible to see pairs and mothers with puppies. It usually has litters from 1 to 3 pups, after a gestation that can last from 63 to 67 days. Individuals use vocalization, similar to a bark, as a means of communication.

The main threats to this species are the loss and degradation of their habitats and road kill.

In order to do this, 20 camera traps were installed inside the Chico Mendes Protected Area. The installation of the camera traps took place in workshops that gathered about 20 local community members and four of them were trained to be the local operators of the equipments.

Camera- traps are normal cameras equipped with technological improvements and appropriate for use in the wild environment. They are hidden and tied to trees, working with light sensors. Every time an animal walks past the equipment, the camera automatically shoots and takes a picture or starts an audio-visual recording.

These cameras use infrared, recording well at night without needing additional light, and do not scare or harass the animals. As a result, the use of camera traps is increasingly being adopted by conservationists around the globe.

The work with camera traps is a partnership between WWF-Brazil, the local forestry comunity cooperative “Cooperfloresta” (Cooperativa dos Produtores Florestais Comunitários, the local residentes association “Amoprex” ( Associação de Moradores e Produtores da Reserva Extrativista Chico Mendes em Xapuri), with support from the Chico Mendes Institute for Biodiversity Conservation , and the managing committee of Resex Chico Mendes. The objective is to monitor the wild animals that occur in the areas used by the community for sustainable harvesting, and help to improve their operations and the conservation of the Amazon forest. 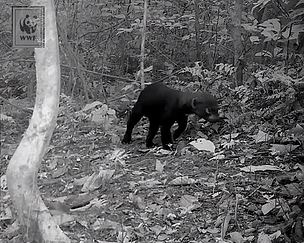 The irara has a slender, elongated body with long hairy tail.
© WWF-Brazil Enlarge 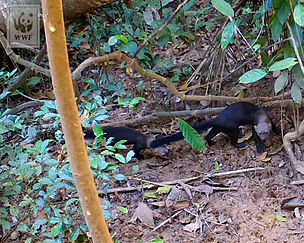 In Brazil it is also called a honeyeater, one of its favorite foods.
© WWF-Brazil Enlarge
Gostou deste artigo?