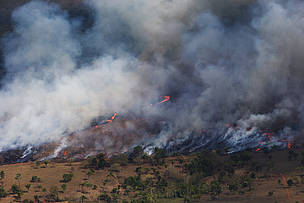 Since January, there have been 14,708 fires in Amazon
© Araquém Alcântara/WWF-Brasil

Pantanal also requires attention:  the biome is the champion of increased fire in 2020

São Paulo, August, 3rd -- The Amazon had another month with increased fires: 6,803 outbreaks were detected in July, according to the National Institute for Space Research (INPE), 28% more than the same period in 2019. This growth occurs despite the presence of the Army in the region, and a federal decree banning the use of fire in the biome for 4 months. The record for the month, in 2017, was 7,986 fires.

“Although the Brazilian government began to say they are working to reduce fires, the figures show that it is still a lot of hard work to reduce the charges from investors and business leaderships inside and outside Brazil”, says Gabriela Yamaguchi, Engaged Society Director of WWF-Brazil. “The representatives of the Brazilian government are still sending mixed signals: on one hand the presence of the army will not be enough if on the other one the Federal Government continues to act on behalf of the illegal land grabbers, miners and loggers. Invasions of indigenous lands and threats to environmental activists in various parts of the Amazon, for example, have not stopped.”

In June, when the dry season started, 2,248 fires were detected in the Amazon biome, the highest rate for the month since 2007. And the data did not give any respite in July. On the contrary. The driest season is only just beginning, and the burning ban will not work without a response in the field, with more inspections.

It is important to remember that the general context of Amazon is worrying. Among the main problems are the high rates of deforestation, which increases the areas susceptible to burning, the disrespect for indigenous rights, which includes the issue of invasions to their territories that do not stop, and also the pandemic of the new coronavirus.

Between January 1st and July 30 this year, 4,135 fire outbreaks were detected in the Pantanal, a number 285% as high as that recorded in the same period last year, when 1,475 outbreaks occurred. This makes the biome the champion of increased fire in 2020. Compared to the average of the last ten years, the number of fires between January 1st and July 30, 2020 increased by 431% in the Pantanal. In July, Pantanal had 1.684 outbreaks, which represents  241% of increase compared to July 2019, when it had 494 fire spots.

The occurrence of fires in the dry season is not part of the Pantanal’s ecological dynamic, it is of anthropogenic origin and it is usually related to one of these two factors: deforestation/conversion or cleaning/reforming pasture lands. Natural fires usually occur in the Pantanal after storms with lightnings – then out of the dry season. Inadequate practices and the use of fire as a management tool without control techniques and no official authorizations are elements that endanger the Pantanal conservation: the largest tropical humid area on the planet.

Since the beginning of 2020, the Pantanal has been hit by a severe drought. From January to May, the volume of rainfall was 50% below normal. Without enough rain to fill wetlands, the biome was more susceptible to uncontrolled fires, caused by farmers. Natural flooding that occurs in the Pantanal plain is at its lowest levels in the past 30 years, and among of the major reasons we have deforestation/conversion and soil compaction caused by soy plantation and cattle ranching in the

Pantanal’s water sourcing areas – upper level regions that surround the biome. The problem was further worsened because 2019 had already been a dry year in the Pantanal and water stress has been accumulated. To make matters worse, the La Niña climate phenomenon, expected later this year, tends to further reduce rainfall in the region. This could result in the greatest drought in the biome for the past 30 years, in the midst of the season of intensified fire outbreaks.

WWF-Brazil  has been providing both immediate support for fighting fires and continuously against deforestation. WWF-Brazil's main objective is to support local forest guardians so that they have the conditions and training to monitor threats, such as deforestation and invasions of territories that have led to an increase in fires.

In the specific context of Covid-19, more than 32,000 people - indigenous and agroextrativist – have received food, hygiene products, and equipment in the Amazon and Cerrado.

Since January, there have been 14,708 fires in Amazon
© Araquém Alcântara/WWF-Brasil Enlarge 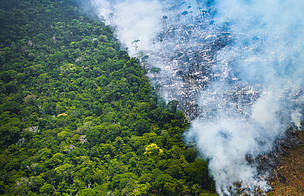 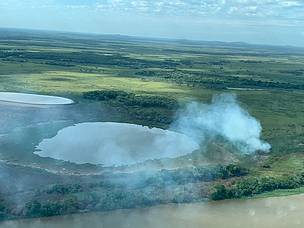 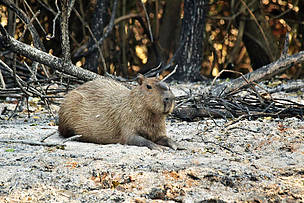 "The fire in the Pantanal for 2020 needs more care than in previous years, as the natural flooding that occurs in the Pantanal plain is at its lowest levels in the last 30 years," says conservation analyst at WWF-Brazil
© André Zumak/IHP Enlarge 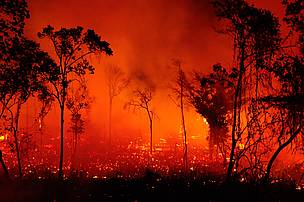