Brazil moves towards record deforestation in the Amazon 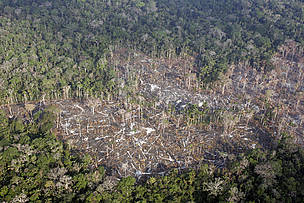 May 8, 2020 - Between August 2019 and April 2020, deforestation in the Amazon reached 5,666 km² - almost the same as the sum of the extent deforested in 2018 and 2019 in the same period, according to data from the Real-Time Deforestation Detection System (Deter-B), from the National Institute for Space Research (Inpe). In percentage terms, the accumulated deforestation from August 2019 to April 2020 already shows an increase of 94%, when compared to the same period of the last year.

When considered separately, deforestation in April is likewise frightening: an increase of 64% compared to the same month in 2019. Last month, deforestation alerts were issued for 405.6 km²; in 2019 that number was 247.7 km².

The alarming data from April come on the track of the historic record set in the first quarter of 2020 when compared to the same period in the last ten years. Compared with the same period in 2019 alone, there was an impressive increase of 51.45%.

Last month's alerts show records of deforestation in areas protected by law, such as the national parks Mapinguari, Campos Amazônicos, Juruena, and Acari and have been concentrated in the BR-163 highway region (Pará state) and northwestern Rondônia state.

“There is an undeniable trajectory of increased deforestation again in 2020, at an even faster pace than 2019. The new official rate of the PRODES system data is expected to exceed, by far, the 10,000 km² observed last year”, analyzes Mauricio Voivodic, executive director of WWF-Brasil. "Contrary to the data from 2019, which considered a period still under the administration of President Temer, the new and impressive record that lies ahead is the exclusive responsibility of the Bolsonaro government," he highlights.

"It is this context that is made worse by the MP910 (executive bill 910): by legalizing land grabbing, that is, lands that have been deforested in previous years, the government gives a clear sign of leniency to the current deforesters. If approved, the MP910 will be the great engine behind future records of deforestation", warns Voivodic.

These numbers show the size of the challenge that the Vice President, Hamilton Mourão, Coordinator of the Council of the Amazon, will have to face, to contain the growth of illegal actions in the region. Yesterday, May 7, it was authorized, for just one month, the use of GLO (Law and Order Guarantee) operations, which allows the use of the military forces to combat deforestation. The GLO operation weakens the work of Ibama and ICMBio by subordinating them to the military.

“Although it is required, the GLO will not be enough if the Federal Government continues to send concrete signals that it is on the side of illegal land grabbers, miners, and loggers. It will be useless, even more, if it is only for a month. The incentive for the invasion will be uncontrollable and as soon as the military forces turn their backs, the land grabbers will return. This is what is already happening in several places, such as Rondônia and Pará states”, says Raul do Valle, director of Social and Environmental Justice at WWF-Brazil.

The daily alerts of the Deter system are used to guide inspection actions by the Brazilian Institute of the Environment and Renewable Natural Resources (Ibama). As it is a daily measurement, it tends to be less accurate than the data from the Brazilian Amazon Rainforest Satellite Monitoring Program (Prodes), released annually. However, there was never any disparity between the trend pointed out by the Deter system and the numbers obtained by the Prodes system.

"We are stepping back towards the deforestation volumes recorded at the beginning of the century when we reached historical deforestation peaks, totally incompatible with the sustainable development commitments assumed by Brazil", points out Mariana Napolitano, Science Manager at WWF-Brazil.

Joint campaign for pressure on congresses
To put pressure on deputies and senators, civil society organizations collectively launched the campaign #MP910Não, against the “Big Amazon Sale Off” that this Provisional Measure will promote. It is a digital tool that helps to send messages to the congresses involved. The link to the campaign is https://www.saldaodaamazonia.org.br/