We need to conserve the native vegetation of the Cerrado 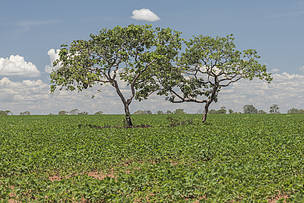 In the last 10 years, the Cerrado has witnessed the country’s highest rates of deforestation
© André Dib/WWF-Brasil
By Letícia Campos

This biome is fundamental for the survival of thousands of animal and plant species, as well as local communities livelihood.

Containing the three water basins that supply the water demand of practically the whole of Brazil, South America’s largest savannah covers 25% of the country’s territory and is home to 30% of its biodiversity. However, the region has long been suffering from losses in its natural vegetation. In the last 10 years, the Cerrado has witnessed the country’s highest rates of deforestation. Every minute, an area equivalent to the size of almost two football fields is deforested (7,408 km²/year, 2017 Cerrado Deforestation Assessment Project – PRODES Cerrado). Despite various warnings, it has taken a while for this situation to be seen as a problem.

Deforestation increased in scale in the 1970s when the government started to incentivise occupation of the region and technology especially adapted for the Cerrado began to be developed. With wide swathes of flat land strategically located in the heart of the country being sold at attractive prices, the biome started to be seen as ideal for the expansion of agribusiness towards the country’s northeast region.

The advance over natural vegetation – particularly for cattle-raising and soybean cultivation, driven by the growing demand for these commodities and opportunities for future gains through real estate speculation – still continues to this day, mainly in the state of Mato Grosso and the region known as MATOPIBA where the states of Maranhão, Tocantins, Piauí and Bahia meet.

The MATOPIBA region has witnessed approximately 2.08 million hectares of the Cerrado disappear to make way for soy production, which grew by 253% between 2000 and 2014 in these states, according to the report “The Expansion of Soybean in the Cerrado – Paths to Sustainable Territorial Occupation, Land Use and Production” published by Agroicone/INPUT in 2016. This document indicates that most of this expansion took place in areas of natural vegetation, unlike in the rest of the Cerrado, where most expansion took place in areas that had previously been cleared.

There is no lack of evidence showing the importance and urgency of protecting the Cerrado. However, this region is at a disadvantage. Without having official National Heritage status accorded in Brazil’s Constitution, which has already been conferred to other biomes, conservation policy for the Cerrado offers less protection, exposing much of its remaining vegetation to future deforestation.

The Cerrado’s vegetation is diverse and made up of different structures of vegetation, including grassland, forest formations and regions of dense forest. As it is not made up of just forest, the environmental importance of this biome is often neglected. Despite there being legislation protecting forests since the beginning of the last century, it is only since the introduction of the Forest Code in 1965 that the term “natural vegetation” started to be used. And in addition, in the new Forest Code approved in 2012, the Cerrado still does not benefit from the same protection as other biomes. This law requires that 20% to 35% of areas on rural properties in the Cerrado are reserved for native vegetation, while this requirement is 80% for the Amazon biome.

A recent survey by the Brazilian Institute of Opinion and Statistics (IBOPE Inteligência) commissioned and publicised by WWF-Brazil on what Brazilians think about protected areas and the environment demonstrated that in 2018, deforestation and water pollution are still seen as the main threats to the environment, with 27% and 26% of mentions by the public respectively. According to the survey, nine in ten Brazilians believe that nature is not being adequately protected, with 91% of those interviewed demonstrating this perception.

Part of the success in reducing deforestation in the Amazon was thanks to an official satellite deforestation monitoring system. And the good news is that in June of this year, the Ministries of Environment and Science and Technology together with the Brazilian Institute for Space Research (INPE) launched a similar tool – the Cerrado Deforestation Assessment Project (PRODES Cerrado). This biome is now undergoing regular monitoring with official publication of data on deforestation on an annual basis.

Coordinator of WWF-Brazil’s Agriculture and Food Program Edegar Rosa remembers that in the case of the Amazon, official data enabled various civil society organisations and companies linked to agricultural production to implement zero deforestation commitments, such as the Public Livestock Commitment and the Soy Moratorium. He argues that this official data, which is now available for the Cerrado, is essential in rethinking the development model for the Cerrado and combatting deforestation. And there are ways that this can be achieved.

Rosa believes that one of these solutions is in the hands of the market, and the message is clear: “We need the companies whose raw materials are sourced from endangered biomes such as the Cerrado, as well as the investors who are active in these sectors, to adopt effective policies and commitments that will stamp out deforestation and disassociate their production chains from recently deforested areas.”

Rosa also mentions that all of the information available today proves that the growing demand for commodities can be met (particularly beef and soy, the production of which takes up the largest areas in the biome) without converting new areas of native vegetation.

“We have a reserve of degraded pastureland in this biome that needs to be put to better use. These underused areas that are losing soil, contaminating rivers and emitting more greenhouse gases need to be restored for use in production, preventing the unnecessary conversion of new areas,” he states. “It is fundamental that we expand public policy such as the Low-Carbon Agriculture (ABC) Plan and develop other incentives so that producers will increase their use of already cleared areas. We don’t need to deforest more to meet the growing demand that is expected for Brazilian agriculture.”

For this reason, WWF-Brazil is in dialogue with society, the government and the private sector to increase engagement with the zero deforestation pact for the Cerrado.

“What I would like to see this September 11, National Cerrado Day, is a clear commitment between all actors in the production and consumption chains that have an impact on the biome, and particularly the soy and beef chains. The expansion of agribusiness in the Cerrado can not continue based on the destruction of natural ecosystems. The planet’s most diverse savannah and the driving force behind one of the pillars of Brazil’s economy has to gain visibility. There is still time to save the Cerrado, but we need to act now,” Rosa concludes.

In the last 10 years, the Cerrado has witnessed the country’s highest rates of deforestation
© André Dib/WWF-Brasil Enlarge 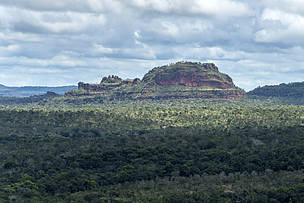 The MATOPIBA region has witnessed approximately 2.08 million hectares of the Cerrado disappear to make way for soy production between 2000 and 2014
© André Dib/WWF-Brasil Enlarge 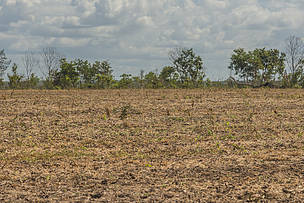