What do we need to lose to start worrying about the Cerrado? 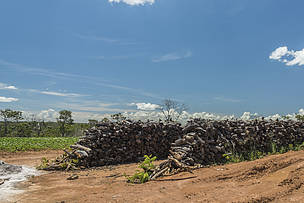 The Cerrado is the Brazilian biome that has suffered the most deforestation, at a rate twice that taking place in the Amazon. According to data recently made available by the Ministry of Environment, the Cerrado is losing almost 1 million hectares of native vegetation per year. If this alarming rate is allowed to continue, the largest process of plant species extinction recorded in history will take place by 2050, with losses in flora three times greater than that recorded since 1500.

One in four endangered fauna species live in the Cerrado, meaning that a total of 137 species are at risk of disappearing. Even if the deforestation were stopped today, over 50% of the biome has already been decimated and what is left is under threat by the new agricultural frontier spanning the states of Maranhão, Tocantins, Piauí and Bahia. Known as Matopiba, this is one of the few regions that still have a large quantity of preserved native vegetation.

The degradation of this biome does not just mean that species will become extinct due to the fragmentation and lack of connectivity between the areas of remnant forest – both plant and animal species depend on these connections and the genetic exchange that these provide to guarantee the feasibility of important populations in the region – but also that the country’s greenhouse gas emissions will increase, an unsustainable production model will be exhausted and nearby indigenous and traditional communities will be threatened.

The impacts of this devastation are already evident in the water shortages experienced in Brasília, in harsher dry seasons and droughts such as those witnessed in Matopiba, which experienced a loss of 30% in grain crops between 2015 and 2016, and in the water shortages in 2013 in the São Francisco region, causing hydroelectric dams to reach their lowest levels in history and affecting the lives of nine out of ten Brazilians depending on the energy produced using the Cerrado’s waters.

This doesn’t sound anything like the Cerrado, the origin of waters considered to be Brazil’s water tank. The country’s main river basins spring from this biome and feed into the São Francisco, Tocantins-Araguaia, Paraná and Paraguai river basins – the latter essential for life in the Pantanal.

Faced with this situation, a series of solutions must be urgently adopted by the whole of society, government and the private sector. Actions must be implemented, such as the use of degraded pastures for the expansion of oilseed and eucalyptus crops, traceability in agribusiness production chains and sectoral agreements to prevent the consumption of products associated with deforestation in the Cerrado.

In addition to this, it is fundamental that regular deforestation monitoring programs are created, such as Prodes-Cerrado, to provide annual rates of vegetation loss, helping to prevent and combat deforestation and to strengthen financing policies to recover areas of the Cerrado in private properties seeking to recover environmental losses in conformity with the new Forest Code.

In addition, the Aichi Targets included in the Convention on Biological Diversity that Brazil signed up to need to be complied with, and these determine that 17% of land and continental water areas should be protected by law. In the Cerrado, the percentage of protected areas is just 7.73%, and a mere 2.89% fall into the category of fully protected land. It is also urgent that a legal framework to protect this biome is approved, including constitutional amendment bill 504/2010, which will include the Cerrado and the Caatinga as areas of national heritage in the Federal Constitution, and bill 25/2015, which provides for the conservation and sustainable use of the biome’s native vegetation.

We need a huge pact against the destruction of the Cerrado, or in a few years there won’t be much left of this precious biome. It’s time to admit that agribusiness should only expand into degraded pastureland and not into natural ecosystems. This means we need to establish a pact for zero deforestation in the biome, so we can save the Cerrado and create something concrete to ensure its intelligent and sustainable use. It is time for Brazilian society to make a choice. And we are already behind.