Smoke over the National Congress in Brasília (DF)
© Antônio Cruz / ABr
The extremely low humidity levels resulting from the long drought and the fires that sweep through the Cerrado savannahs every year have cast a curtain of smoke over Brasília, the Brazilian capital this week. Not only do they release ‘greenhouse gases’ that are the cause of global warming but they have made the queues at local health centres grow long as patients with respiratory problems flock in. And all this is taking place on the eve of September 11 when Brazil commemorates Cerrado Day

The dry season extends normally from May to September but in 2011 it has been particularly severe. In some regions relative humidity has been as low as 10%. There has also been no let up in the fires that have devoured the vegetation in protected areas like the Gama-Cabeça de Veado Environmental Protection Area, the Brasília Air Base, the Brasília National Forest, the Águas Emendadas Ecological Station, and even a protected area surrounding the  historical Catetinho Palace, where the Brazilian President Juscelino Kubitschek had his Office during the construction of Brasília.

Last weekend alone, more than 80 outbreaks of fire were registered in the Federal District and more than 800 hectares of vegetation were destroyed, according to the local Fire Brigade. As a WWF-Brazil survey has shown, last year  there was a 350% increase in Cerrado fires compared to 2009.

According to the Federal District Health Department, the smoke carries with it toxic substances that irritate the eyes and the respiratory tracts and are especially harmful to people suffering from asthma bronchitis and sinusitis.

“Drought and brush fires are a natural occurrence in the Cerrado when certain conditions prevail so they should not be viewed as an unexpected event. The public authorities need to  make appropriate preparations beforehand  to combat the problem, reduce losses of Cerrado vegetation, avoid pollution of the air and preserve the population’s good health”, declared Michael Becker, coordinator of WWF-Brazil’s Cerrado-Pantanal Programme. 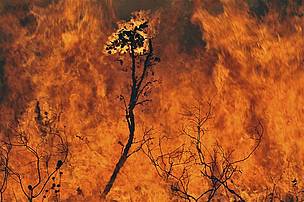