Burning grows 350% in the Cerrado 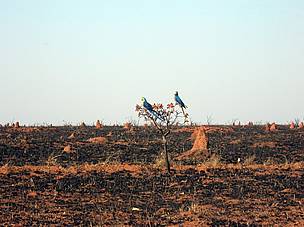 Blue-and-yellow macaws (Ara ararauna) in a region destroyed by the fire in the Emas National Park, in the Cerrado savannah, in the state of Goiás, Brazil.
© Arquivo / ICMBio
By Aldem Bourscheit, WWF-Brazil

The return of the rains is putting an end to one of the worst droughts in recent years. The biome most damaged by burning and fires in 2010 has been the Cerrado savannah.
According to data supplied by the Brazilian National Space Research Institute (Inpe), in the period from May to September 57.7 thousand outbreaks of fire were registered in the Cerrado; that is three and a half times greater than the number for the same period in 2009 (see table below) and a record number for the last five years. Serious damage was done to Nature conservation and the soil; regional greenhouse gas emissions soared and the health of the population was also affected.
The worst hit states were Mato Grosso, Tocantins and Goiás. The Federal capital , Brasília went 120 days without any rain. Mara Moscoso, a geographer and coordinator of the Environmental NGOs Forum in the Federal District, adds that all the National Parks in the Cerrado area that protect considerable proportion of what is left of the biome suffered from the passage of fire through their areas. The Emas National Park (Goias) had 90% of its area burned, the Brasilia National Park (DF) and the Araguaia National Park(Tocantins). 40% and the Serra da Canastra National Park (Minas Gerais), 35% . The Chico Mendes Institute is expected to announce the final balance of the damage done before the end of October.
According to the geographer, the fire devours trees shrubs and other plants and frequently victimises small or slow animals, those with thick coats like the giant anteater, nesting birds, mammals with young ones and others in their reproductive phase.  In 2005 practically the entire area of the Botanical Garden was burned, and up until today larger mammals are no longer seen there. The fires also increase the risk of animals being run over as they flee, and after the destruction of habitats there is heightened competition among the survivors for food and territories, she explains.
According to the federal government, burning and wildfires during the drought in the Cerrado are almost all the handiwork of human beings. Burning is done to force the pastures to put out new growth to feed the cattle herds and also to clear land before or after the vegetation has been cut down.
Embrapa Cerrados researcher José Felipe Ribeiro remarks that the occurrence and indiscriminate use of fire facilitates the rapid and opportunistic reproduction of plant species that often do not belong to the biome at all, like grass species of African origin. Part of the nutrients contained in the plants and the nutrients in the soil are eliminated by fires and may be swept away on the wind leading to the gradual substitution and impoverishment of the Cerrados native vegetation, he declared.
Ribeiro also commented that fire has in fact been part of the Cerrados evolutionary process but formerly it was more prone to occur in the rainy season as a result of lightning strikes. Nowadays, the pattern has completely reversed and fire attacks the vegetation when it is at its driest, causing far more serious impacts. Cerrado  species do have some limited protection against fires of the type that occurred in the past  but not against the increasingly intense annual fires they are being subjected to today, he stated.

With almost two decades dedicated to the study of the Cerrado, Mercedes Bustamante, research professor at the University of Brasilias Biological Sciences Institute explains that the annual burning increases the fragmentation of the biome thereby jeopardising the lives of species that need large land areas for their survival, like the big cats. It also leads to a gradual reduction in the height and girth of the vegetation components making any recuperation of the Cerrado, which has already lost half of its original vegetation, very difficult to achieve. The explosive increase in the number of locations with outbreaks of wildfire or burning is certainly attributable to the climate conditions and the deliberate burning done by human beings, all of which translates into greater emissions of CO2 and other greenhouse gas emissions stemming from this biome, she said.
Between 2002 and 2008, average annual emissions of greenhouse gases originating from the Cerrado were around 232 million tons of CO2, according to the federal government. Deforestation continues to be the number one source of emissions in Brazil.
There is also the question of damaging health. A survey conducted by the Oswaldo Cruz Foundations (Fiocruz/RJ) National Public Health School proved that people constantly exposed to smoke from the burning areas are liable to suffer from asthma, bronchitis, emphysema, pneumonia, arrhythmia, and hypertension and may even suffer a heart attack. Children and old people are affected the most.
More action needed

To address all those complex problems, Bustamente expects the government to expand its analysis of the losses and damage caused by the Cerrado fires this year and  to verify the kinds of vegetation and the regions hardest hit.  It is important to identify if the concentration of the fires was in regions of agricultural and cattle- ranching expansion, and whether they were natural, spontaneous fires, or deliberately set. It is also important not to interrupt the monitoring of the biome or the actions to combat burning and fires just because the rains have arrived, she insisted.
WWF-Brasil CEO Denise Hamú underscores that climate change reinforces a tendency towards more days a year without rainfall and accordingly to a worsening of the Cerrado burning situation in the coming years. Therein lies the importance of permanent and effective public policies to protect and recuperate the Cerrado areas and make sustainable use of this biome,  which has already lost over half of its original vegetation, she declared.
In Mara Moscosos view, the fires that have devastated the Cerrado this year happened for a series of natural reasons boosted by the inefficiency of the public authorities. There is a lack of campaigns to inform the public and a need for more surveillance and inspection to control illegal burning. Without them a general impression of impunity prevails. In Mato Grosso, one of the states with highest number of fire outbreaks registered this year, burning was officially prohibited. That should be a lesson learned for addressing the situation next year, she pointed out.
Another problem identified by José Felipe Ribeiro, of Embrapa Cerrados is the lack of effective integration among the various institutions.  He feels that governments and researchers need to find better ways of joining forces and disseminating information and actions on fire management and control. The reason behind the extraordinary numbers of outbreaks of fire this year needs to be identified. If the reason is ignorance and lack of information then education is needed. If the reason is maliciousness and bad behaviour then we need to reinforce surveillance and enforce the laws, he said.
On Inpes recommendation, the balance sheet displays data gathered by Night Scanning Satellite NOAA15 Noite, which only detects the most persistent areas of burning and fire outbreaks.

Blue-and-yellow macaws (Ara ararauna) in a region destroyed by the fire in the Emas National Park, in the Cerrado savannah, in the state of Goiás, Brazil.
© Arquivo / ICMBio Enlarge
Gostou deste artigo?