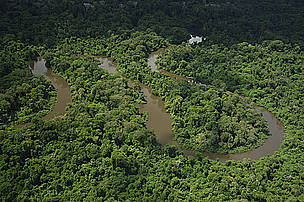 .
© Zig KOCH
Pressured by environmentalists, haunted by public opinion and alerted by politicians including allies, the government of President Michel Temer saw no other way than to give up the idea of developing industrial-scale mining projects in an area the size of Denmark, in the Amazon: the Reserva Nacional de Cobre e Associados (Renca).

As of this Tuesday (26), the decree signed by the Ministry of Mines and Energy, which authorized research and mining in Renca, which was closed for such activities in 1984, is officially suspended.

It is an area of 47 thousand square kilometers of well-preserved native forest, which encompasses nine protected areas, two indigenous lands and seven federal and state conservation units and has a very low rate of deforestation.

This whole territory would find itself vulnerable since the government simply decided to open the doors to the mining industry without considering the social and environmental aspects involved in the decision. The government did not listen to scientists, NGOs or local populations. It was the wrong form and the wrong content.

At the end of July, days before the announcement of Renca's suspension, WWF-Brazil released a report anticipating the action and warning about the socio-environmental impacts that opening the reserve could cause in the region. The subject has become popular in the national and international media.

The campaign spread throughout society. Brazil and the world have spoken against the government. Activists, artists, scholars, ordinary people. Everyone was against Renca.

Two lawsuits suspended the government’s plan. Faced with the cataclysm of about one million signatures obtained by Avaaz, the president of the House of Representatives Rodrigo Maia (DEM/RJ) said the govern had to "learn to lose."

The opposition tried to bar the decision and created an inquiry commission made up of representatives and senators to understand what was "behind the opening of the Renca." Temer, however, would not budge.
The Ministry of Mines and Energy tried to argue, promising a "broad discussion with society as a whole" over Renca's future within four months. But faced with the unsustainable scenario, the govern backed earlier this week.

"The government took a while to understand that it will not be able to make decisions that involve the Amazon, protected areas or traditional and indigenous populations without negotiating this with society. I hope this serves to wake up the government. We will be here to remind them”, said WWF-Brazil executive director Mauricio Voivodic.

Despite the celebration, there is a reason to be suspicious of the government’s change in posture. In the official note announcing the decision to back down on Renca, the Ministry of Mines and Energy said the government's withdrawal is strategic.

In reporting that it would take a step back, the government gave a hint when it said that "the reasons that led to the proposed extinction of the reserve remain present. The country needs to grow, create jobs, attract investments to the mining sector, including exploiting the region's economic potential".

But this notion of an economy that the government proves to have about the Amazon does not fit the complexity of the region.

"The Amazon needs much more than scattered, disconnected projects and works that generate deforestation and social degradation. This will not lead the region to a sustainable future", says Jaime Gesisky, a specialist in Public Policy at WWF-Brazil.

According to him, the region needs complex planning that takes into account its incredible biodiversity, the essential environmental services for the planet and the perspective of local populations. "Otherwise, we will be taking the agenda to the last century."