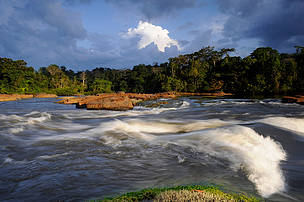 Renca is only one of the ongoing offensives against Brazilian protected areas.
© WWF-Brasil
After a week of national and international upheaval to preserve the Amazon, on August 31st the Brazilian Ministry of Mines and Energy retreated and announced the decision of the Temer government to suspend the decree that extinguished the National Reserve of Copper and Associates (Renca) and allowed mining in the area. Within 120 days, the government should hold a debate with society and present conclusions on sustainable development in the region. WWF-Brazil considers a victory for the socio-environmental movement but warns that there is no time to rest: the threats to protected areas and native communities are present in bills that will be voted on Congress in the coming weeks.
Renca is only one of the ongoing offensives against Brazilian protected areas. There is a package of measures of setbacks in socio-environmental policy that only deepens in the Temer government. It ranges from the weakening of environmental licensing to the sale of land to foreigners, through the reduction of protected areas and the suspension of indigenous land demarcations. “We are facing the biggest attack on the environment, indigenous peoples and traditional communities of the last decades. So we hope that the government will convene the society not only to comment on Renca but also to define the direction for the development of the Amazon and other threatened biomes”, said Mauricio Voivodic, executive director of WWF-Brazil.

Renca is only one of the ongoing offensives against Brazilian protected areas.
© WWF-Brasil Enlarge
Gostou deste artigo?