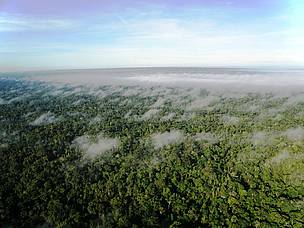 O WWF-Brasil defende que as mudanças no Código Florestal sejam amplamente discutidas pela sociedade
© WWF-Brasil/Bruno Taitson
The Comitê Brasil in Defense of the Forests and Sustainable Development, which congregates more than 160 different civil society organizations against the terms of the draft bill to reform the current Forest Law, will be mobilizing in mass in Brasilia this Tuesday (March 6) and organizing protest demonstrations all over the country throughout the week. The bill may be put to a vote this Tuesday (March 6) or Wednesday (March 7).

The protests are aimed at blocking the approval of the Forest Law legislation in the terms proposed by big agribusiness and landholding interests (Ruralistas). It is hoped that over 1.5 thousand people will turn out for the demonstration in Brasilia. Demonstrators will congregate in front of the Cathedral at 8 am and then march to the Três Poderes square.

Parliamentarians, environmentalists, social movement activists, students and representatives of fishing communities and the Via Campesina rural workers movement from all over Brazil will march towards the Congress building shouting their slogans and accompanied by cultural manifestations and performances.

Part of the demonstrators will line up in the Tres Poderes square to compose a living banner with the phrase VETADILMA (veto it Dilma!). The NGOs want to remind President Dilma Rousseff of her election campaign promises and, if the bill is approved as it stands, urge her to keep those promises by using her presidential power to veto it.

The mobilization and protests will reach people also trough social media channels as Twitter and Facebook with the hastag #vetadilma and #SOSBrazil. WWF offices in Brazil, Colômbia, Germany, México, Spain, UK, US and other countries are taking part in this online action for forests.
Women belonging to the Via Campesina rural workers movement will also be organizing a national mobilization this Tuesday (March 6) “to denounce the threats to national sovereignty that would stem from the approval of the Forest Law reform Bill so ardently defended by the Ruralista parliamentarians".

Folha de São Paulo newspaper has shown on Monday that the voting may lead to the suspension of three out of every four fines of over 1 million Brazilian reals imposed by the federal environment authority Ibama for acts of illegal deforestation.

If all the outstanding fines, whatever their size, are included the amount being amnestied is a huge 8.4 billion Brazilian reals.

Many of the rural landowners being fined are also defendants in legal actions for crimes committed against the environment and 10 of them are being tried for keeping rural workers in conditions analogous to slavery.
Auditors attached to the federal environment authority Ibama and public prosecutors alike declare that they believe any amnesty granted will delay even further pending administrative and criminal processes as well as sending out a clear message of impunity that will pave the way for new crimes.

"The numbers published by the newspaper Folha de São Paulo have enabled Brazilians to realize just what granting amnesty to those that carried out illegal deforestation will really mean. We hope parliamentarians and government will be sensitive to the idea that you cannot grant privileges to groups that break the law, pardoning their debts to the detriment of the Brazilian people of today and of those to come", stated Maria Cecília Wey de Brito, WWF-Brazil´s CEO.