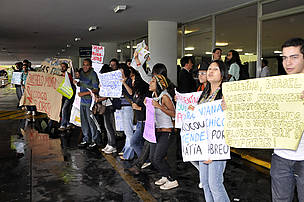 The Brazilian Senate’s Environment Standing Committee has inflicted yet another defeat on the Brazilian forests and the country’s natural resources as a whole. This Wednesday (23 Nov) the text of the draft Forest Law reform bill presented by committee rapporteur, senator for Acre Jorge Viana (PT) was approved by a wide majority in the Committee. Only the senator for Amapa, Randolfe Rodrigues (PSOL), voted against it.

The bill as it stands maintains unaltered a set of retrograde provisions that were present in the original version approved by the House of Representatives and constructed under the guidance of Representative for São Paulo Aldo Rebelo (PC do B). Among them are amnesty granted for environmental crimes, and exemption from the existing obligation to restore illegally deforested areas of Permanent Protection and legal reserve vegetation.

According to former Environment Minister Marina Silva, an ex-senator herself, Brazil has suffered a resounding defeat at the hands of the Standing Committee. “It is a lie to declare that the legal text is good and the result of consensus among environmentalists and ruralists (parliamentarians representing agribusiness and big landholding interests), or that a satisfactory middle way between the two positions was found. What has really happened is that we have marched down the path to expanding devastation and to installing retrograde processes, and we have done so under the patronage of the Federal Government and with the complete omission of its Ministry of the Environment”, she protested.

Marina Silva expressed further disappointment with the committee rapporteur responsible for preparing the report, senator Jorge Viana. “Suffering a defeat at the hands of Aldo Rebelo would be bad enough, but seeing the ruralistas commemorating a text produced by our good colleague, Jorge Viana, is far worse. I was a senator for 16 years but I never once saw such unanimity on the side of ruralista interests. This has been a very, very hard day for me”, regretted the ex-senator.

João Paulo Capobianco, ex-head of the Forests Department at the Ministry of the Environment was also critical of the approved text. “It is much more of an agricultural law than a Forest Law. It has been a great deception altogether, and even more so because the rapporteur has always been a person highly committed to the protection and welfare of the environment”, he declared.
One of the aspects that aroused most suspicion was the extreme haste with which the bill was rushed through. Senator Jorge Viana formally read out the text of the draft bill before the Committee on Monday (Nov.21) and only 48 hours were allowed for its more than 200 proposed amendments to be analysed, discussed and voted on. Up until a few minutes before the voting began, some senators had still not received a copy of all the proposed amendments.

Senator for Rio de Janeiro Lindbergh Farias (PT) recalled that when the bill was being appreciated and analysed by the Senate’s Constitution and Justice, and Science and Technology Committees, very little time was allotted to discuss the merit of the bill itself but that was supposedly justified by alleging that the debate would be more intense and profound when it went before the Environment Committee. That however, was not the case. “There is no good reason for overriding the rules, we cannot vote on something so important in this way. We are simply voting in the dark”, he protested.

Senator Randolfe Rodrigues repeatedly called for the voting to be postponed so that the text and all the 200 amendments proposed could be properly discussed and evaluated by the senators responsible for voting on it. “The version of the bill read out yesterday by Senator Jorge Viana has undergone several structural alterations but there are still many flaws embedded in the text. We cannot conduct the process in this way”, he insisted. The President of the Standing Committee, Senator for the Federal District Rodrigo Rollemberg (PSB-DF), ignored Randolfe Rodrigues’s appeals and the Senate’s internal regulations and determined that the voting should proceed.

In the view of the protesting senator Rodrigues, who belongs to the Socialism and Liberty Party –PSOL, it is of fundamental importance that society should get involved with the issue and demand that the senators reject the bill when it goes before the full senate house for voting. That vote will take place in the coming weeks. Indeed the ruralista faction hopes to have the bill approved in the senate, and again in the second vote of the House of Representatives and then be submitted for sanctioning by President Dilma Rousseff, all before the end of this year.

Among the 200 amendments proposed to the main text, 77 were singled out to be voted separately this Thursday (Nov. 24). According to WWF-Brazil’s public policies analyst Kenzo Jucá, most of them, if they are approved, are liable to make the legal text even worse than it is now. “It shows that the time frame established by the Senate has made it impossible to formulate a text that would be capable of protecting the forests”, he concluded.