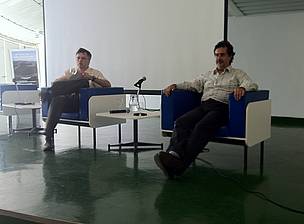 Britaldo Soares (UFMG) and Carlos Alberto de Mattos Scaramuzza (WWF-Brazil) in the Forest Law Seminar for Journalists.
© WWF-Brasil/Jorge Verlindo
Agricultural and livestock raising activities in Brazil can expand significantly and contribute to meeting the growing global demand for food without resorting to renewed deforestation. That information is set out in a study report entitled ‘Reconciling Agricultural Production with Forest Conservation and Restoration’ presented by professor Britaldo Soares Filho, of the Geosciences Institute at the Federal University of Minas Gerais (UFMG).