It is possible to produce while conserving the Cerrado 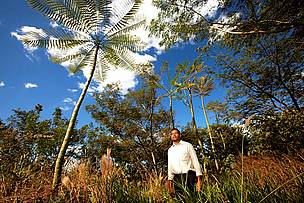 Levi Cerqueira amidst the vegetation he helped to recover, on the banks of Vitória Pond.
© WWF-Brasil / João Paulo Barbosa
In the surroundings of Brazil's Federal District, all size farmers combine agricultural production with law compliance and recovery of degraded areas.  Nevertheless, it is vital to curb fragmentation of the Cerrado biome.


Cristalina municipal district[1], located in Goiás state, is one of the largest agribusiness poles in the Central-West Region of Brazil.  It includes around 1.500 monoculture irrigation pivots and shelters a dozen farming settlements of families who came from various parts of the country to grow vegetables and cereals to supply large consumer markets.

William Souto is in charge of the local farmers' union.  He is one of the farmers established in Poço Grande settlement, where plots measuring up to 20 hectares yearly produce near 15,000 tons of corn, beans, cassava, sorghum, rice, soy, honey, milk, squash, vegetables and seasoning herbs.  These products are sold in food fairs and supermarkets in the Federal District (Brasilia and its surroundings) and in the states of Rio de Janeiro, Espírito Santo and Paraná.  Part of that is organic production used to supply local schools, kindergartens and homes.

In this farming settlement, the vegetation cover was conserved in the Legal Reserve and on the banks of the beautiful São Marcos River - a well is formed in that part of the river and it is near 40 meter deep.  Everything is legal there and it causes no harm to agriculture.  "Green areas are needed and they do not hurt production.  They provide shade, recreation and rest.  And they improve the climate.  The forest is conserved by every one of the 800 families who joined the union. There are no co-existence problems involving production and conservation", emphasizes Souto.

Nevertheless, part of the forest in this settlement will soon be cleared and the area will be reforested.  This is due to the floods caused by the Batalha (Furnas) hydropower dam, located 100 kilometers south of there. Poço Grande is known by its fish wealth, particularly the catfish such as the shovelnose surubim (Pseudoplatystoma fasciatum), the barred surubim (Pinirampus pirinampu), the Golden dourado (Salminus maxillosus) and the spotted pintado (Pseudoplatystoma coruscans).  "There will be impacts and that means work for us, to replant that which is degraded. But it also means the opportunity for us to sell food directly to hotels and other new business to be established after the lake is full", says Souto.

The pond in the Vitoria settlement was visibly declining after the banks were cleared to produce charcoal and soy and rice were grown in the drained area.  This degraded scene began to change five years ago, when farmers stopped the water loss and started to replant native fruit trees along the banks. "Until 2009, the pond disappeared during the drought. Since then, we managed to secure water all year round.  Our aim is to ensure a navigable waterway full of fish", says farmer Levi Cerqueira.

The farming settlement also intends to recover the eroded and deforested paths due to predatory agribusiness occupying part of its 1.400 hectares, an area now shared by 48 families.  "Without recovery, streams will be silted and water supply will be affected", stressed Cerqueira.  Just like in other Cristalina settlements, the seedlings used to recover degraded areas are produced in nurseries supported by Rede Terra, a 12-year old network devoted to Agroecology dissemination and law compliance promotion among family farmers, as well as to sales support.

Rubens Valentini is an economist and agronomist from São Paulo.  He came to the Federal District Guided Settlement Program (PAD/DF) region in the 1970's to grow irrigated lemon, raise goats and breed fish.  Commercial success was achieved through pig farming, an activity carried out for 25 years now. By using a Danish species which is adapted to the Cerrado (tropical savannas), Valentini keeps 3.700 matrices, which are responsible for near 200 births per week.  When they reach the right age, live stocks are sold to slaughterhouses located in the Federal District.  There are around 100 workers involved in this activity, which includes an animal feed factory.

The farm is now being expanded, following European criteria for friendlier animal breeding.  Feeding is entirely controlled by computers and the effluents flow to large tanks where they are dissolved and cleaned.  By the end of the year, there will be up to 2,000 cubic meters per day of methane gas captured from decomposed material and totally used to produce power and heat for the nurseries.  The forests in the Legal Reserve areas and in the Permanent Preservation Areas, sheltering vigorous Cerrado vegetation and headwaters, are protected by fence to keep away some 400 heads of beef cattle. "Today it is no longer necessary to destroy in order to produce.  Keeping those areas caused me no loss and they have been preserved for 30 years now", says Valentini.

Agrícola Wehrmann now includes three farms of its own property plus some rented ones.  It is one of the largest Brazilian producers of certified irrigated vegetables, potatoes, carrot, onion and garlic, besides soy and corn seedlings.  It supplies mostly big supermarket networks in Brazil, though part of the sales are also bound to Uruguay, Italy and Spain.  The company has some 1,200 employees, besides over 2,000 hired workers for each harvest season. The production area is being expanded and processes are being reviewed to decrease loss and waste.

Besides preserving the vegetation on the banks of rivers and streams and in the Legal Reserve areas of the rural properties, since year 2000 the company maintains a nursery with Cerrado native seedlings, including species such as the rainforest plum ('cagaita'), jatoba and the angico wood tree.  Around 700,000 seedlings were already planted in the degraded areas, on former pastures, and around the headwaters.  Seedlings are also donated to schools.  They are all supplied with local manure.  "We are searching for technology to reduce water consumption for irrigation and we use the varieties which are best for the local climate and soil", says Mariana Meloni, in charge of Quality Control and Certification.

According to WWF-Brazil's Cerrado-Pantanal Program Officer, Michael Becker, comply with legislation is possible and necessary for farming, since native vegetation provides vital services such as pollination, water protection and climate control.  Nevertheless, it is necessary to strengthen the Cerrado land use control legislation, which presently offers great possibilities for legal deforestation.   That calls for a connection of the biome fragments.  Becker emphasizes that "governments, farmers and civil organizations must act together to ensure the connection of those forest fragments and compose sustainable landscapes for the benefit of the country".

According to producer Rubens Valentini, from Granja Miunça, agriculture and ranching technologies which are available today need to be disseminated, based on capacity building and technical follow up.  He points out that "today's farmer needs to have expertise in several fields" and "economic and technological encouragements are needed to achieve culture change in the national scope (to further avoid degradation).  Those are the ways for a truly Brazilian Forest Law reform."

Levi Cerqueira amidst the vegetation he helped to recover, on the banks of Vitória Pond.
© WWF-Brasil / João Paulo Barbosa Enlarge 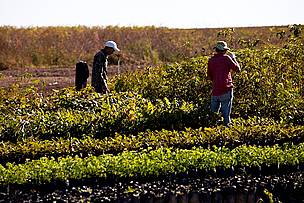