A law that values the standing forests, sustainable production and biodiversity is what Brasil needs 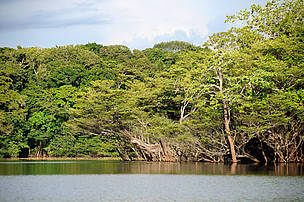 Forests have tremendous synergy with agricultural production because of the environmental services they provide.
© WWF-Brasil / Zig Koch
The Forest Law reform should be looking towards the great markets that the sustainable exploitation of Brazil’s biodiversity represents. That is the view of climatologist and researcher Carlos Nobre, secretary for Development Policies and Programmes at the Brazilian Ministry of Science and Technology. According to the researcher, the great challenge facing agriculture around the world is how to produce sustainably.

“Brazil is no different. Our trajectory must be in the direction of sustainability. The Forest Law reform needs to look to the future; to address the rational economic  exploitation of our unparalled biodiversity,” declared the researcher during a public hearing before the Senate Standing Committee for Science and Technology that took place this Wednesday (July 6), when the Forest Law reform bill came up for discussion.

Nobre cited the example of the Assai palm fruit, now an industry, which, he declared, has a gross income of around 5 billion reals a year and is exported to various countries. “That is just one product among hundreds or even thousands waiting to be exploited and to put Brazil in a position of economic leadership in the 21st century,” he enthused. According to the researcher, Assai will soon be surpassing Amazonian wood in terms of export values. The Brazilian Agricultural and Livestock Research Corporation, Embrapa, declared that the Assai market is expanding at a rate of 30% a year.

Claudio Maretti, leader of the Living Amazon Initiative, underscored that last year, at the international conference in Nagoya, Japan; Brazil committed itself to achieving the biodiversity goals for the year 2020 established by the United Nations Convention on Biological Diversity.

“O WWF is in favour of an even more ambitious goal, namely, to cut biodiversity losses to zero by the end of the decade because of the importance of biodiversity’s contribution to the quality of human life, as a series of scientific studies have clearly shown,” he stressed.

Carlos Nobre also pointed out the need for the Forest Law reform to make provisions for saving lives in urban areas. “Specific parameters need to be defined for permanent preservation areas in the urban environment, especially the vegetation accompanying water courses and on steep slopes and hilltops, simply in order to save human lives,” declared the climatologist, recalling the recent disasters  in the Serrana region of Rio de Janeiro state at the beginning of this year.

Study supported by WWF-Brazil recently publicised by the Brazilian Ministry of the Environment   shows that 92% of the disastrous landslides that occurred in the Serrana region of Rio de Janeiro were caused by improper occupation of the land.

The Ministry of the Environment’s director for Forests presented the results of a Ministry study that that totally discredited the affirmation that the Forest Law currently in force makes all the production of coffee in the State of Minas Gerais and all the production of grapes in the state of Rio Grande do Sul unfeasible and illegal because they occur on slopes that are steeper than 45 degrees, whereas the Law determines that the natural vegetation in such areas must be preserved.

“In the light of real knowledge of the situation that affirmation becomes a myth. In the state of Rio de Janeiro, for example, a state with one of the most exuberant reliefs in the country, only 0.3% of its area has slopes steeper than 45 degrees. In the city and municipality of São Joaquim, in Santa Catarina, a traditional producer of apples, there is not one single area with that kind of inclination. The same is true of the coffee producing area of  Três Pontas, in Minas Gerais and of Bento Gonçalves, in the state of  Rio Grande do Sul, a major grape-producing region,” said João de Deus Medeiros. “That means that there is no incompatibility whatever between protecting those areas and maintaining the production of those traditional crops,” he added.

The President of the Standing Committee for Science and Technology,  senator for the State of Amazonas Eduardo Braga (PMDB) reminded those present that the forests had “tremendous synergy” with agricultural production because of the environmental services they provide (production of water, hosting pollinators, climate regulation). “If we are leaders in the agricultural markets today, it is also  because of our natural resources,” said the senator.

In Braga’s view, what the Congress needs to be discussing now is what kind of future  we want to build for our country: “We can choose between constructing an intelligent future , based on sustainable development,  or we can go down the road chosen by countries that have totally destroyed their natural resources  and lost their capacity to produce,” he said.

In his opinion, right now, the Federal Senate has an opportunity to deepen the discussion of the Forest Law reform. “We need to listen to the agricultural producers, yes, but we also need to hear what the scientists have to say. WE cannot align ourselves with those that accuse people who want to construct an intelligent future for Brazil of having ‘sold out’,” he declared.