Ministra do Meio Ambiente, Izabela Teixeira, fala sobre projeto de reforma do Código Florestal em audiência conjunta das comissões de Meio Ambiente, Defesa do Consumidor e Fiscalização e Controle (CMA) e de Agricultura e Reforma Agrária (CRA).
© Geraldo Magela / Agência Senado
A public hearing with Environment Minister Izabella Teixeira that lasted more than five hours marked the beginning of the Federal Senate debates on the reform bill proposing alterations to the Forest Law, approved by the House of Representatives and now before the Senate. With every available space occupied from start to finish, the senators were unanimous in declaring that the senate should ‘take as much time as necessary to ensure in-depth discussion and more profound analysis of the issues’.

This first public hearing involved was conducted as a joint session of the two standing committees that are analysing the current reform proposal: Agriculture and the Environment. The Environment minister began her presentation by stressing that the Federal Senate now had an opportunity to look to the future and she underscored the challenges that Brazil would be facing in the coming fifty years.

“Our biodiversity is an economic asset; products like wood, fish, and environmental services like water, soils and genetic resources; all of them come under the umbrella heading of biodiversity. We actually have 25% of all the biodiversity on the Planet. That should not be seen as drawback, quite the contrary, it represents yet another development opportunity for Brazil, a factor that will endow Brazilian agriculture with a competitive edge that few other countries possess.”

Izabella Teixeira also emphatically reminded the senators that Brasil was a protagonist in three important international conventions – on Climate Change, on Biological Diversity and on Desertification, and had made various formal commitments. “When the conventions were signed and this house ratified them – what were the international comments? That the entire discussion on biodiversity lay in the sphere of national sovereignty, each country should define the way it would conduct its biodiversity process,’ she added.

The Minister criticised the treatment meted out to protected areas in the provisions of the bill now before the Senate and already approved by the House of Representatives. “The proposal would do away with Permanent Protection Areas in rural areas. That is unacceptable. Permanent Protection Areas are what ensure the maintenance of our water and soils and provide protection for our fauna. Without them there will be no more environmental services, which are so crucial to the sustainability of Brazilian agricultural production. Permanent Protected Areas are life itself,” she declared.

Around 15 senators took the floor to question aspects of Brazil’s environment policies and the government’s position. The speeches, however, were in a conciliatory tone, calling for the valuing of Brazilian agriculture but also declaring the need for environmental conservation.

The senator charged with producing the report of the Standing Committee for the Environment, senator Jorge Vianna, former governor of the State of Acre reminded those present that the country was named after a tree and stated that his role was to listen to all the anxieties expressed and  attempt to be as impartial as possible. Vianna called attention to the negative factor of pending legal insecurity and the need for the senate to address it and find a solution in its discussions. “It is important to provide a framework of legal security for those engaged in agriculture while at the same time making sure that no harm comes to the environment,” he stated.

Eduardo Braga, senator for the state of Amazonas and former governor of the state, pointed out that Brazil is one of the world’s biggest producers because it has a good climate and a diversity of favourable environments. “The Forest Law must not be the Forest Law of Agribusiness alone,  it must be the Forest Law of all Brazilians and it must take economic, social and environmental aspects equally into account. Provision for compensation for environmental services need to be written into the law so that Permanent Preservation and legal reserve areas can be remunerated as the assets for good that they really are”, he proposed.

The Draft Bill will still be the subject of series of other debates in the Senate. The next Public Hearing has been scheduled for July 6, before the Standing Committee on Science and Technology. Representatives of the Brazilian Society for the Advancement of Science, the Ministries of Science and Technology; Agriculture, and the Environment will be participating. The Institute of Applied Economic Research, which has recently published a study on legal reserve areas and deforestation, will also be taking part. The study estimates that the area of native vegetation that will no longer be recuperated if the proposed amnesty for deforestation in legal reserve areas on small rural properties is granted will be at least 29 million hectares. 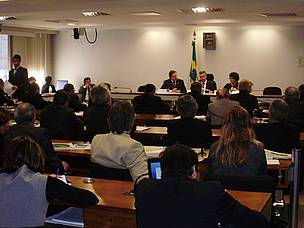