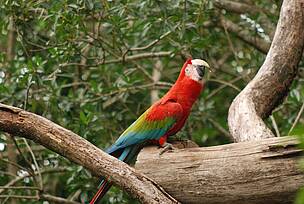 Red-and-green Macaw (Ara chloropterus) drinking from a water trough in the colony Buraco das Araras near Bonito. These cliffs are a famous nesting site for this species of Macaw.
© Jaap van der Waarde / WWF-Netherlands
However, we say little about the mechanisms for controlling and combating wildlife trafficking. This illicit practice moves worldwide - transnationally - up to 23 billion dollars a year, excluding illegal fishing and timber, according to a study by the UNEP - United Nations Program for the Environment.

Wildlife trafficking - both cross-border and domestic - is heavily involved with organized criminal groups and contributes to the decline of biodiversity. Between 1970 and 2016 it was already possible to see an average reduction of 68% in the monitored populations of mammals, birds, amphibians and fish, mainly caused by factors such as infrastructure works, agriculture and fishing, production practices that put pressure on natural environments and others (Living Planet Report 2020). In addition, not only can it have convergence with other crimes (drug trafficking, counterfeit goods, illegal possession of weapons, among others), but it depends on other crimes for it to occur, such as (but not restricted to) smuggling, corruption, forgery and money laundering.

WWF-Brasil and Freeland Brasil carried out a survey that analyzes the legal framework, inspection mechanisms and their effectiveness, with the aim of generating recommendations to strengthen the fight against wildlife trafficking in Brazil. For Anna Carolina Lins, from WWF-Brasil, the document provides a detailed reading of the laws and points out aspects in which they can be improved, but also reaches those working in the field with tips to optimize inspection. “Our intention is to qualify the debate to improve policies that already exist in the fight against illegal trafficking”, she emphasizes.

It was found that confronting the serious problem of wild trafficking depends on strengthening the regulatory framework and institutional capacities to combat it. It is necessary to increase the transparency and integration of public information; improve coordination of command and control bodies, actions and inspection mechanisms; review the rules for punishing traffickers and criminal organizations; among other measures.

The survey points out sensitive points of laws, resolutions, ordinances, proposals in the National Congress, offers guidance - whether on the Union budget or the actions of different police bodies, and suggests actions for the field of inspection and for the Management system of the Triage Centers of Wild Animals, among others.

According to Juliana Machado Ferreira, Executive Director of Freeland Brasil, the effective fight against wildlife trafficking will be achieved through a multifaceted approach that develops education and awareness work to reduce demand, strengthen government institutions that fight crime, and strengthening the legal framework, both at the national level (avoiding setbacks and strengthening legislation), and at the regional level (development of agreements and multi-agency and cross-border action) and at the international level (with, for example, the implementation of the proposal for a 4th protocol on crime against wild species in the UN Convention on Transnational Organized Crime, led by the End Wildlife Crime initiative). Furthermore, it is crucial that issues relating to social inclusion are also addressed. The organization of a work as complex as this could take place under the umbrella of a "National Strategy for Combating the Traffic in Wild Fauna".

During the survey, in addition to an in-depth study of data, interviews were carried out with specialists in the area, who have professional experience with the subject, such as public and political authorities, the academic community and the third sector. They qualified the look of analysts in the legal investigation.

The survey points out several recommendations related to topics such as:

Red-and-green Macaw (Ara chloropterus) drinking from a water trough in the colony Buraco das Araras near Bonito. These cliffs are a famous nesting site for this species of Macaw.
© Jaap van der Waarde / WWF-Netherlands Enlarge