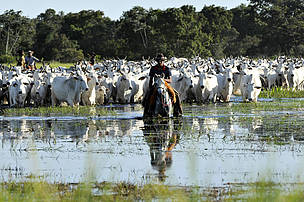 The study Perspectivas para a Cadeia de Carne Bovina nas Relações Brasil-China (Perspectives on the Beef Supply Chain in Brazil-China Relations), by SCOT Consultoria with the support of WWF-Brazil and Solidaridad, in partnership with TFA (Tropical Forest Alliance), draws a detailed profile of Brazilian livestock: its role in the global context , with special emphasis on the projections of demand and exports of beef to China up to 2030; the chain's agents view in relation to environmental issues; the conditions of pasture areas in Brazil, with the percentage of degraded areas and levels of degradation; the use of technologies and improvements in Brazilian livestock, such as the Integrated crop-livestock system; a comparison of the results of conventional livestock versus Integrated crop-livestock systems; the cost of reforming a hectare of degraded pasture; and how much of the area currently occupied with pasture could be released for other purposes, which demonstrates that the gain in productivity would reflect in a smaller need for area, keeping current production.

The study considers three different scenarios for pasture reforms to estimate investments for the total recovery of Brazilian pastures between R$ 126.99 billion and R$ 245.81 billion (about US$ 23.6 billion – US$ 45.55 billion). The reference was defined for Mato Grosso, based on June 2021, for three technological levels: 1. Minimum reform, with minimal use of operations and supplies; 2. Regular reform, based on what is current in the experts' view; and 3. Reform with high technology, according to technical recommendations for a high productivity pasture.

In these scenarios, the current production of beef could be 87.8%, 66.9%, and 62.9%, respectively, freeing up areas for other activities, without the need to open new areas.

Brazil is the second-biggest beef producer and the largest exporter in the world. Its consolidation in the international market is related to the growth of world demand, with China assuming a relevant role in this scenario.

“Last year, China accounted for more than 50% of the total volume of fresh beef shipped by Brazil”, says Fabíola Zerbini, Regional Director of TFA for Latin America. "The SCOT study makes it clear that our country has the potential to increase herd productivity through the adoption of technology and the improvement of pastures throughout its territory, improving production, traceability and origin control systems, at the same time that recovers degraded areas and contributes significantly to environmental sustainability”.

According to Paulo Lima, Solidaridad's Livestock and Cocoa Programme Manager, “the study highlights the differences in productive potential between Brazilian regions, due to particularities of soil, topography, and climate, among others. There are also technological and economic development differences between states and regions, but this is also an opportunity to intensify production systems and to apply technologies linked to the recovery of degraded pastures, nutrition, genetic improvement, and integrated systems, which increases the efficiency of land use, reducing the emission of GHG (greenhouse gases), and increasing the availability of land for agriculture”.

The combined approach between food systems and tackling deforestation is essential for the positive future of forests and agriculture, through collective actions that guarantee food security, sanitary quality and, at the same time, protect forests and productively include communities and small producers.

"The development of a global carbon market is growing and the application of quantification technologies and low GHG emissions in agribusiness can place Brazil in a role of international relevance, including the recovery of degraded pasture areas and the use of technologies by already established systems”, comments Edegar Rosa, Director of Conservation and Restoration at WWF-Brazil. “Climate changes are a global concern and the study confirms that Brazilian livestock has known and tested technologies for more efficient productivity and to meet the growing demand of the global market. Now it is essential to rehabilitate the 30% of highly degraded pastures, which reduces the sector's emissions and ensures growth without the need to convert new areas. But the research also proves there is enormous scope for the adoption of nutritional and genetic improvement techniques, which, integrated with other practices, are alternatives for the improvement of Brazilian production combined with environmental sustainability.

The research also compares the results between systems using technologies to serve the Chinese market (cattle up to 30 months old) to a traditional production system, with profits for the producer of around 3.8% and 0.6%, respectively. The comparison between the profitability history (1995-2021) between these systems reveals average profitability of 3.8% in the technological system against 0.02% in the low-tech system.

The study concludes that “Brazil's differential in the carbon credit market is the combination of environmental conservation, recovery of degraded areas, increased agricultural productivity and the fight against deforestation and the conversion of native vegetation which, together with the implementation of the Forest Code, would bring opportunities to the country, which could benefit from the export of carbon credits”.

Environmental issues will increasingly occupy a priority place in China's access to Western markets. Thus, the expectation is for an increase in the Chinese demand for environmental compliance standards from commodity supplier countries. In this context, the dialogue between the actors in the Brazilian and Chinese livestock supply chain is essential, which can result in Chinese investments in sustainable initiatives in national agriculture and livestock, based on the creation of a knowledge exchange mechanism between producers, governments, and Brazilian and Chinese companies, a requirement for sustainable production.


About WWF - Brazil
WWF-Brazil is a Brazilian NGO that for 25 years has worked collectively with partners from civil society, academia, governments, and companies across the country to fight socio-environmental degradation and defend the lives of people and nature. WWF-Brazil is connected in an interdependent network that seeks urgent solutions to the climate emergency. Learn more at www.org.br.

About TFA
Tropical Forest Alliance (TFA) is a platform that brings together multiple partners around the common goal of finding and implementing solutions to fight against deforestation resulting from commercial activities in tropical forest areas. An initiative of the World Economic Forum, TFA works with government, private sector, and civil society representatives such as indigenous peoples and international organizations to consolidate high-impact partnerships to reduce deforestation and build a positive future for forests. Through its partners, the TFA platform identifies challenges and develops solutions, bringing together experts from around the world to turn ideas into effective actions in Latin America, Africa, China, and Southwest Asia.

About Solidaridad
The Fundação Solidaridad is part of the Solidaridad Network, an international civil society organization that has been working for over fifty years in the development of socially inclusive, environmentally responsible, and economically profitable agricultural value chains. It aims to accelerate the transition to inclusive, low-carbon production, contributing to the world's food and climate security. In Brazil for 12 years, it has been developing sustainability initiatives with its partners in the following chains: cotton, cocoa, coffee, sugarcane, mate, orange, livestock, and soy. To learn more about Solidaridad, visit https://www.solidaridadsouthamerica.org/brasil