Fire killed 17 million vertebrates in the Pantanal in 2020 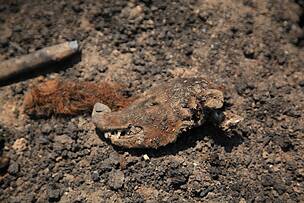 When spotting the carcasses, the researchers recorded one by one, with dates and geographic coordinates, as well as the position and distance of each one in relation to the reference line
© Juliana Arini/ WWF-Brasil
Covering large areas of the biome right after the fires, 30 scientists from different institutions counted animal carcasses and applied mathematical models to estimate mortality; project had support from WWF-Brazil and other organizations

At least 17 million vertebrate animals were directly killed by fire during the wildfires that, throughout 2020, devastated 27% of the vegetation cover of the Brazilian Pantanal. The estimate was made by a group of 30 scientists from different institutions, in an unprecedented study coordinated by researcher Walfrido Moraes Tomas, from Embrapa Pantanal (Brazilian Agricultural Research Corporation).

The methodology applied in the research included the counting, in the field, of the carcasses of dead animals in burned areas, in a period of 24 to 48 hours after the fire had passed. The work was carried out during the occurrence of the historic wildfires of 2020.

The data obtained from the field survey were subjected to statistical methods and mathematical modeling in order to estimate how many animals - and which groups - were killed by fire throughout the biome, according to Tomas. A work in such a large area, in such a short period, in sites of difficult access, under the pressure of large fires, represented a considerable logistical and scientific challenge, according to the researcher.

In order to count animal carcasses, applying a strict protocol, the researchers engaged in an extensive task force that covered areas affected by the fire in 126 linear stretches - or transects - distributed from north to south of the Pantanal, in Mato Grosso and Mato Grosso South. The work was carried out between August and mid-November 2020.

When spotting the carcasses, the researchers recorded one by one, with dates and geographic coordinates, as well as the position and distance of each one in relation to the reference line. The further away from the line, the less chance of seeing animal carcasses, when present. Calculating this probability of detecting a carcass, the scientists developed a mathematical model capable of correcting the detectability error and estimating the number of carcasses present in the entire area.

According to Tomas, this kind of technique, known as "distance sampling", is widely used by biologists to count animal populations, but it had never been used to count animals killed by wildfires.

"It was a pioneering work in the world with the use of this technique for this kind of study and we achieved very robust results. What matters in this type of survey is the number of carcasses registered and we managed to obtain almost 400. This allowed us to draw up an estimate with a very small margin of error and the numbers are very reliable", explains Tomas.

As the Pantanal is a diverse biome and was burning from north to south, the task force had to distribute itself in dozens of transects. According to protocol, the count should be done within 48 hours after the fire has passed, at most. To perform this, the scientists monitored the new fire outbreaks using satellite images and, everytime the fire site was found, they sent a team to carry out the survey.

"With all this effort, we were able to make 126 counting lines, in some areas with extremely difficult access. If we had more resources, we would have included an even greater number of transects", says Tomas. According to him, the survey had a high cost, including car, fuel and food rentals for the participants.

The study had the participation of researchers from Embrapa Pantanal, ICMBio, Ibama, the federal universities of Mato Grosso, Rio de Janeiro, and Mato Grosso do Sul, the Smithsonian Institute of Conservation Biology, the Pantanal Research Institute, the Instituto do Homem Pantaneiro (IHP) and several other research institutions.

In the southern region of the Pantanal, most of the research resources were provided by the Biota-MS Program, of the Secretariat for the Environment, Economic Development, Production and Family Agriculture (Semagro) of Mato Grosso do Sul. WWF-Brazil collaborated with part of the funds for research in Mato Grosso. There was also financial and logistical support from institutions such as the Museu Paraense Emílio Goeldi, Embrapa, SESC-Pantanal, ECOA, IHP and Panthera Foundation.

"Several of the institutions provided their own resources, such as the IHP and ICMBio, which also provided very experienced personnel in the field and were very important partners," says Tomas.

The idea of carrying out the survey arose during the 2019 fires, according to the researcher, but at that time the project was aborted for safety reasons. "When the 2020 fires got even stronger, we decided that we needed to bridge this knowledge gap and more accurately measure the fire's impact on wildlife," he says.

"The numbers we brought do not give the exact dimension, but they show the magnitude of what must have happened in the Pantanal in 2020. This gives us a baseline to assess the impact of future wildfires like these, if they keep repeating over the years," he says Tomas.

According to Chirstine Strüssmann, professor of Ecology and Biodiversity Conservation at UFMT, who coordinated one of the teams in the field, the work provides a basis for further research that may reveal the scale of the global impact of fire on the ecosystem. "A study of this magnitude, with a unique methodology, had never been carried out in such a large area of the Pantanal", she says.

Although the lack of previous data prevents an accurate analysis of the impacts suffered by the fauna in 2020, the researchers found that some populations were more affected than others. "The number of snakes we were able to see was greater than that of other animal groups. We don't have a prior basis for comparison - and snake populations can be much larger than those of other groups. But even among snakes, the impact was uneven. The aquatics were especially hit", she says.

According to the study, the mortality rate was high mainly among reptiles, concentrating more than 79% of the total number of dead animals. Out of these, more than 95% were snakes, and 97% of them were aquatic species. Mammals were just over 15% of the total and amphibians 4%. The number of dead birds found was relatively lower.

According to Christine, the fire caused by drought is part of the natural dynamics of the biome, whose balance depends on the alternation between periods of flooding and drought. Species that thrive in the wet season have strategies that allow them to survive the dry season, quickly making up for lost space when fires cease and rains return.

This natural regeneration cycle, however, could be compromised if fires as intense as those in 2020 occur for several consecutive years - a very real risk, considering climate change.

"Many animals have escape strategies, even where there is a so-called 'underground fire', which burns under the cover of peat when the flames seem to have already ceased. The problem is that the duration of the fire was very long in some areas and, in these cases, both the fauna and the flora have a hard time to recover. In each area of the biome, the response is different," says the Christine.

Tomas, the research coordinator, says that the uneven impact on different populations of animals can have an unpredictable impact on the complex ecological relationships among them.

"All animals have functions in ecosystems. Rodents, for instance, are prey to carnivores and disperse seeds. When we lose the snakes that feed on them, for example, the rodent population can explode. This leads to the phenomenon known as 'ratada' - a rat invasion - , which is already happening in some areas of the Pantanal", explains Tomas.

According to him, however, it is difficult to track all ecological impacts, especially since the density of each animal population before the fires was unknown. "We estimate that nearly 170,000 primates, 220,000 medium and large birds and 85,000 alligators died. But the density of these animal populations in the biome is variable and many of them, such as snakes and rodents, died underground and could not be registered in the surveys. This indicates that, for animals like this, the numbers were even higher than calculated," he says.

For biologist Danilo Bandini Ribeiro, a professor at UFMS who did not participate in the study, one of the most dramatic consequences of the intense burning of 2020 in the Pantanal is that the fire affected areas of forest formation that normally do not burn - and this drastically reduced the availability of refuges for animals, limiting their survival strategies.

"Although fire is part of the dynamics of the Pantanal, the extent of wildfires in 2020 was abnormal. Almost 30% of the biome was hit by the flames. This would not be so serious if such a large area burned little by little. But we had mega wildfires with flame fronts of up to 20 kilometers. Under these conditions, the fire spreads too quickly, preventing the formation of refuges for the animals," explains Ribeiro.

Ribeiro is the coordinator of the Noleedi Project (meaning fire, in the Kadiwéu language), which studies the effect of fire on the biota of the Pantanal in the Mato Grosso do Sul State and its interaction with different flood regimes. The project, which is a partnership between UFMS and Prevfogo-Ibama, was supported by WWF-Brazil.

He explains that the Pantanal has pluriannual drought and flood cycles - and that is why it is important to study the impacts from a long-term perspective. According to Ribeiro, it is not yet known whether this sequence of dry years in the Pantanal is the result of yet another multi-year cycle, or whether it is a consequence of climate change.

"We may be entering a cycle of several years of drought, as occurred in the 1970s. But we are not sure, because in addition to annual variations and large multi-year cycles, we have the influence of climate change, which is contributing to make environments drier and hotter, with more pronounced extremes", says Ribeiro.

For him, while there is no conclusion on the origin of the droughts, the best way forward is to improve the management of controlled fires. "Of all the resources we have, in terms of public policies, fire management is the one that gathers the most scientific evidence of its efficiency. I believe that it is also necessary to increase investment in prevention - not just setting up brigades to fight fires , but to have brigades working all year long carrying out fire management", he stresses.

The biologist claims that banning the use of fire is a counterproductive strategy, as fire is part of the biome's dynamics. If there is no controlled fire, dry biomass accumulates and then, if fire starts, it gets completely out of control. "The prescribed burnings are the most efficient way to prevent large uncontrolled fires. With the management of the amount of dry biomass, the tendency is that these managed areas do not burn, or burn less, reducing the scar from the fire", says the researcher.

When spotting the carcasses, the researchers recorded one by one, with dates and geographic coordinates, as well as the position and distance of each one in relation to the reference line
© Juliana Arini/ WWF-Brasil Enlarge 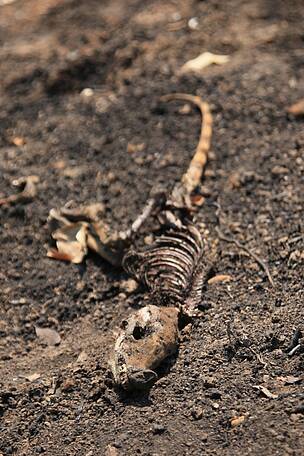 "It was a pioneering work in the world with the use of this technique for this kind of study and we achieved very robust results. What matters in this type of survey is the number of carcasses registered and we managed to obtain almost 400. This allowed us to draw up an estimate with a very small margin of error and the numbers are very reliable", explains Tomas
© Juliana Arini/ WWF-Brasil Enlarge 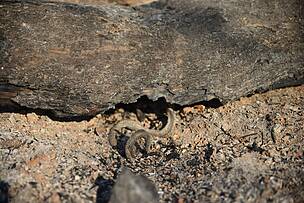 The work provides a basis for further research that may reveal the scale of the global impact of fire on the ecosystem
© Juliana Arini/ WWF-Brasil Enlarge
Gostou deste artigo?