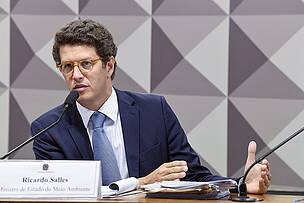 
On the same day that the worst Environment Minister in the history of Brazil falls, Bill 490, which violates indigenous rights for their lands, was approved by the Constitution and Justice Committee of the National Congress, proving that the tractor of socio-environmental setbacks keeps destroying at full blast. The president of the Chamber of Deputies, Arthur Lira, and the Congress are also writing this story of environmental misrule.

The performance of the Bolsonaro government in the field of the Environment will go down in history as the most devastating that Brazil has ever had. Since 2019, Brazil has seen successive budget cuts in the Ministry of the Environment, the dismantling of effective mechanisms for punishing environmental criminals, support for legislative changes that destroy the legal protection framework developed in the last four decades - and, publicly, the endorsement of illegal activities.

It is not just environmentalists who are protesting the Bolsonaro government's environmental setback. On the same day that Salles announces his resignation, a group of more than 100 prominent businessmen from the most diverse sectors of the Brazilian economy sends a letter to the president of the Chamber of Deputies repudiating the projects that are on the agenda, which, if approved, could put pressure on the Amazon beyond its tipping point.

This is one more of the numerous demonstrations by the national and international productive sector against the environmental policy of the Bolsonaro government - a policy that only benefits public land thieves, wood and gold smugglers, and other criminals. Salles was the protagonist in this process, but he was not the only one - and the guidelines of the government have not changed.

New incumbent of the position

Trading six of one for half a dozen of the other will not bring relief to the country. The person announced for the replacement of Ricardo Salles is Joaquim Álvaro Pereira Leite, with whom he worked for years at the Sociedade Rural Brasileira. Invited by the now-former minister to occupy the Amazon and Environmental Services Secretariat, he arrived with promises of attracting resources for the environmental area, through Payment for Environmental Services programs and the sale of carbon credits for avoided deforestation. But who would invest in a country that turns a blind eye to criminal actions and, for that reason, sees deforestation exploding?

There is, for now, no reason to hope that he will be able to do much differently from his predecessor. The departure of the worst environment minister in History does not necessarily mean a change for the better, as it is clear that the origin of the problems lies in the Planalto Palace, the president's official workplace. If the presidential orientation remains the same, this change will have little effect.