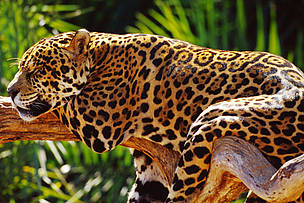 A bill that is being processed with priority status in the Brazilian Congress intends to open a road in the last jaguar refuge in the south of the American continent – ​​the Iguaçu National Park, in the state of Paraná, where the Iguaçu Falls are located. The area is located on the triple border between Brazil, Argentina and Paraguay and is one of the main nature tourism destinations in Brazil, receiving around 2 million tourists a year. The proposal, which may be voted on in the coming weeks, also allows the opening of roads in all federal Conservation Units, including in the Amazon, which represents an unprecedented setback given the historic connection between the opening of roads and increased deforestation, wildfires, running over of fauna and illegal activities inside protected areas.

The discussion of the project takes place at a delicate moment in Brazilian socioenvironmental governance. The president of Ibama (the Brazilian Institute for the Environment and Renewable Natural Resources) -the agency in charge of environmental inspection-, Fortunato Bim, was removed from office by court decision, on suspicion of corruption. Environment Minister Ricardo Salles is being investigated for alleged collaboration with illegal loggers. And a government commission is currently studying the possibility of extinction of ICMBio (the Chico Mendes Institute for Biodiversity Conservation), the body responsible for managing nature Conservation Units in Brazil.

The proposed road would divide the Iguaçu National Park in two, segregating the fauna and making room for illegal hunters, drug dealers, smugglers, and wood thieves. But it has the support of President Jair Bolsonaro and local politicians linked to agribusiness. The idea is to retake the old bed of a road that was illegally opened in the 1950s and closed by court order in 1986. A new illegal opening was made in 1997 and permanently barred in 2003. Today, the area of the old road is completely regenerated and taken over by the Atlantic Forest, the most destroyed Brazilian biome. Of the original area of ​​the biome, only 7.3% remain. Paraná is one of the states that still contributes heavily to the biome's deforestation rates.

During the period it was open, the road was used for crimes. It was a route for smuggling and trafficking of narcotics and weapons, and facilitated the hunting of animals, including those threatened with extinction. The road was even used for illegal executions of opponents of the Brazilian military dictatorship (1964-1985). Among them, at least six were militants captured in Argentina and executed by Brazilian Army forces in an ambush on the old road, an episode narrated in the book “Where did you bury our dead”, written by journalist Aluízio Palmar, a survivor of the military dictatorship.

Entrepreneurs linked to tourism fear that the aggression to the park will impact their business. The region of Foz do Iguaçu municipality, where the falls are located, is one of the main destinations for foreign tourists in Brazil. In 2019, the Park received more than 2 million visitors. Between 2013 and 2016, gross revenue from its paying visitors was about US$ 25 million, not including indirect economic circulation (commerce, hotels, restaurants etc), estimated at over US$ 40 million.

“All the data tells us that this would be a significant threat to the only remaining growing jaguar population of the Atlantic Rainforest, located in Iguaçu, and to biodiversity, to public safety, and to the economy”, says Dr. Carmel Croukamp, ​​president of the Claravis Institute and CEO of Bird's Park, one of the main tourist attractions in Foz do Iguaçu.

“What is important for people to understand is how important these jaguar populations, this forest, this biodiversity hotspot is to tourism. Most of the economy in the Iguaçu region is dependent on tourism, centered around the Iguaçu National Park, the waterfalls, the forest, the wildlife. Imagine the sight of bulldozers tearing down hectares of critically endangered Atlantic Rainforest in full public view, within a national park that is the single biggest magnet for tourism of our state, and one of the biggest tourism destinations in Brazil,” he says.

“The tourism industry in Iguaçu is already on its knees because of coronavirus, and there are few social security nets. Many people working in the tourism industry today depends on food donations. It astounds us that federal representatives should choose to make a decision such as this, and to vote for this to go through the Chamber and Senate with urgency. This law is a trojan horse - something that banks on local conflicts between small rural communities and the Iguaçu National Park, in order to pass a law that allows the construction of roads, without any real criteria, in any national park of Brazil. To do this in the name of tourism or biodiversity of our region is a source of shame to us because it does not correspond to the facts or to our sources of income", he adds.
The series of threats posed by the proposal to open the road also brings the possibility of the park losing the title of Natural Heritage of Humanity, granted by Unesco in 1986.

In addition to immediately threatening the Iguaçu National Park, the bill allows the opening of roads in other nature Conservation Units in Brazil. “This is an unprecedented setback, which can bring many negative impacts to conservation in Brazil”, assesses the Science Manager at WWF-Brazil, Mariana Napolitano. “The approval of this project would authorize the disintegration of national parks and other Conservation Units in all Brazilian biomes”, she says.

The Iguaçu National Park, created in 1939, houses a rich biodiversity of flora and fauna, including more than 250 species of trees, 550 of birds, 120 of mammals, 79 of reptiles, 55 of amphibians and, together with the Iguazú National Park, in Argentina, it has one of the last jaguar populations in southern South America. Together with Argentina and Paraguay, it forms one of the largest remnants of the Atlantic Forest.

A little over ten years ago, in 2009, there were between nine and 11 jaguars remaining in the Iguaçu Park, and the species was close to local extinction. This situation was reversed through intensive research, inspection, and engagement with neighboring communities. The effort paid off, as shown by counts made every two years, through censuses carried out simultaneously in Brazil and Argentina. In 2016, the study indicated the existence of 22 jaguars in the park. In 2018, the survey indicated an increase of 27%, and the total rose to 28 animals. Since 2019, ten new jaguars have been identified in the park, including three cubs. The opening of a road in this habitat would not only bring the risk of being run over and of hunting activity, but would also segregate animals, preventing their reproduction.

“The opening of a road dividing the park in two would have terrible consequences for the conservation of its biodiversity”, says the president of the Environmental Council of Foz do Iguaçu, Raby Khalil. “It would be the path to destruction, harming not only jaguars and nature, but the entire tourism chain and the region's economy. We will not allow this setback”, he completes.

The jaguar is one of the brazilian animals threatened with extinction
© Michel Gunther / WWF Enlarge
Gostou deste artigo?