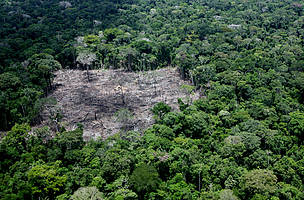 In 2021, the dry season has barely started and the news is already bad: in May, the number of fire outbreaks in the Amazon and the Cerrado biomes is already the highest since 2007, surpassing even May 2020 - the year with the highest record of wildfires within a decade, which caught the attention of the international press. In the largest Brazilian biomes, fires begin to intensify throughout the month of June and reach their peak in August and September.

"The figures show an extremely critical situation. In a context in which deforestation is encouraged by the rhetorical speech of the federal government and the total weakening of environmental inspection, this year's drought is added to the extremely high rates of deforestation, forming a very favorable scenario for large wildfires, both in the Amazon and in the Cerrado", highlights Mauricio Voivodic, executive director at WWF-Brazil.

Across Brazil, between January 1 and May 31, 2021, 15,492 fires have already been recorded. In the Pantanal, the number of fires remains low at the beginning of June, but the concern is great because this year's drought in the biome is more severe and widespread than that of 2020, which directly influenced the historical record of fires in the Pantanal that year. Last year, the fire destroyed 30% of the Pantanal, with more than 22 thousand fire outbreaks in the biome, a figure higher than the sum of the three previous years.

According to experts, the extreme drought of 2021 is also a cause for concern in the Amazon. In the biome, this year's rainy season - which runs from November to April - was even drier than that of 2020 in southern parts of the biome, especially in the region known as the "arc of deforestation". Some regions of the biome received only 60% of their historical average rainfall.

"Although the use of fire is a common practice for several producers and traditional communities, it is important to notice that this traditional use occurs in very small areas, necessary for subsistence. In the case of the Amazon Forest, which is a humid biome, large-scale wildfires are the result of criminal action, associated with illegal deforestation and land grabbing", explains Voivodic.

According to estimates by the National Center for Monitoring and Alerting of Natural Disasters (Cemaden), by the end of 2021, the fire could destroy more than 5,000 square kilometers of forests in the Amazon.

The rise in fire outbreaks in 2020 was the worst in the decade, ranking second only to 2010 when the country registered about 319,000 fire outbreaks. The worst situation was that of the Pantanal, where 22,116 fire outbreaks were recorded in 2020, the worst mark in Inpe's historical series, which started in 1998 and about 120% more than in 2019.

Attribution studies have shown that, in addition to climatic phenomena such as La Niña, it is already possible to detect the signature of the climate crisis in the 2021 drought. A study published in the scientific journal PNAS shows that the conversion of the Amazon Forest into large commercial plantations has effects on the local climate of the Amazon, creating areas up to 3oC warmer and with less rainfall. The conclusions result from the monitoring of areas in Rondônia and Mato Grosso from the 1990s to the mid-2010s, and from the comparison of these places with Amazonian regions that did not suffer intense deforestation. The acceleration of forest destruction in the last two years contributes to this trend.

The devastation of large Brazilian biomes. Deforestation is also growing rapidly in the Amazon and Cerrado in 2021. Between May 1 and 28, 1,180 km2 of the Amazon rainforest were devastated - the highest number for the period since 2016 and an increase of 83% compared to the 645 km2 deforested in May 2020. In the Cerrado, the acceleration is even greater. Between May 1 and 27, 870 km2 were deforested, an increase of 142% compared to 360 km2 recorded in the same period in 2020.

The acceleration of devastation is also evident when considering the accumulated data since August - when the official counting of the deforestation season begins. From August to the end of May, the accumulated deforestation in the Amazon is only 5% lower than that detected in the same period in 2020. The difference was much greater but has been decreasing rapidly with the explosion of deforestation in the first months of drought. Considering the accumulated figures since the beginning of August, the Cerrado had 3,868 km2 destroyed, an increase of 30% compared to the same period in 2020, when 2,981 km2 were deforested.

The increase in deforestation in the large Brazilian biomes is directly related to the environmental dismantling promoted by the Bolsonaro government. Although the upward trend in deforestation in the Amazon dates back to 2016, it was in the last two years, when the government clearly sided with criminals who occupy and deforest illegally, that the destruction of the forest reached record numbers.

Each year, the biome gets closer to the tipping point from which the forest does not sustain itself anymore and becomes a highly degraded environment. Scientists estimate that the tipping point could happen between 20% and 25% of deforestation and we are already close to 20%. In addition to incalculable biodiversity losses, the way of life of forest peoples would be doomed to disappearance. As the Amazon has proven importance on the continent's rainfall regime, its disappearance would also doom the entire large agribusiness that extends through the Midwest, Southeast, and South regions of the country.

"Right now, the National Congress has been triggering a package of bills that, if approved, will take Brazil beyond this tipping point, depriving Latin America and the world of the largest tropical forest on the planet," warns Voivodic. "With nearly two and a half years in office, it is clear that the destruction of the Amazon is a Bolsonaro government project", he analyzes.