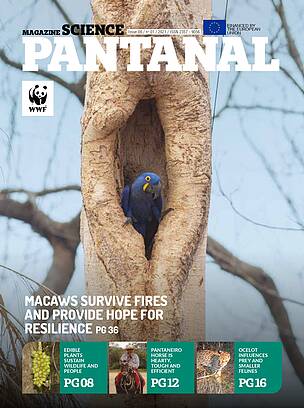 Scientific evidence and information are essential to tackle environmental challenges and ensure the conservation of sociobiodiversity and the landscape of biomes. For this reason, WWF-Brasil presents the sixth edition of Ciência Pantanal magazine, targeted at an audience involved or interested in the defense of fauna, flora, culture and the entire Pantanal biome.

This publication is one of the rare moments where researchers who represent several institutions come together to present relevant research for the Pantanal. This union fosters the existence of a channel for dialogue and exchange of knowledge between the scientific community and society, thus helping to popularize science and publicize existing conservation projects.

“In this year of 2021, WWF-Brasil commits for the third consecutive year to the production, dissemination and distribution of the magazine, as a manner to encourage the production of science, relevant information and cultures linked to the Pantanal”, says Cássio Bernardino , WWF-Brazil coordinator. “It is a privilege to be able to support this wealth of data at such a troubled time not only for the Pantanal, but for the entire Brazilian environment,” says Bernardino.

The magazine's distinguishing feature is to “translate” the technical-scientific themes into a language accessible to all audiences.  The journalist responsible for organizing the publication, Liana John, says that it is a privilege to offer relevant scientific content to young people and adults. “Taking scientific results to the lay audience in a light way helps motivate people to contribute to environmental conservation and sustainable development, reducing conflicts between our way of thinking and our actions”, she says.


2021 Edition
In this edition, two articles refer to the drastic consequences of the fires that occurred in 2019 and 2020, affecting the Pantanal fauna, flora and communities, as well as actions involving firefighting, directing aid to animals and promoting environmental restoration.

The health of wild animals is addressed in two other articles, one focused on ocelots, the most abundant feline in the Pantanal, and the other on the consequences of parasitism and clinical and laboratory evaluations. The role of pollinators and herbivorous mammals in their environments is highlighted in two more articles, alongside the valuation of the Pantanal horse; combining tourism and science to preserve Bonito's fish; efforts to develop sustainable businesses and the use of edible native plants. The use of planning instruments such as future projections and ecological-economic zoning is also focused. And the happy reunion of a bird, 76 years after its latest scientific record in Brazilian lands, closes the magazine.

The Ciência Pantanal  magazine was initially created by WCS Brasil (Associação Conservação da Vida Silvestre) aiming at taking the results of research carried out in the Pantanal to the Pantanal residents and other individuals interested in the conservation of the Pantanal nature and culture.
When the organization ceased to exist in Brazil, WWF-Brasil assumed its maintenance because it understood that the production of culture and science in the Pantanal should be maintained and disseminated to the general audience.

The magazine is distributed free of charge.