New Brazilian NDC reduces the country's climate ambition, against the spirit of the Paris Agreement 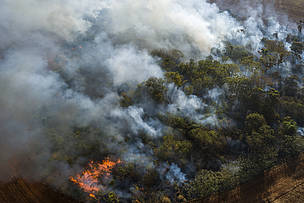 Five years after the adoption of the Paris Agreement, signatory countries are expected, by the end of 2020, to present new or updated Nationally Determined Contributions (NDCs) with enhanced emissions reduction commitments and other contributions to combatting climate change. Yet again, the Brazilian government failed to show any commitment to improve its climate efforts, or to demonstrate leadership on the international stage.
In the period since the Paris Agreement was adopted, important studies have been published pointing to the need for countries to increase their ambition, in order to meet the objective of limiting global warming to 1,5˚C by the end of the century. In recent months, the vast majority of countries have indicated they will revise their NDCs and some of the world's major economies have significantly increase the level of ambition of their commitments.

Unfortunately, Brazil is again going in the opposite direction, isolating itself even more on the international stage. The NDC submitted by the Brazilian government presents several problems of content, form and process, as described below. Instead of showing increased ambition, the Brazilian NDC is weakening commitments already made and tries to use procedural and legal maneuvers to cover up its backsliding, while violating the spirit, if not the letter, of the Paris Agreement.

In addition, it holds out the possibility of an indicative long term target, but despite being one of the 10 largest economies in the world, makes it (and perhaps the entire NDC) conditional on the payment of 10 billion dollars a year, with no explanation of the basis for this amount or how the funds would be used.

At a time when Brazil requires economic recovery strategies due to the pandemic and the economic crisis, the new NDC should point the way to a low carbon recovery and thus catalyze investments and international financial support, especially expanding social protection actions for most vulnerable populations. Instead, the new Brazilian NDC will raise red flags, concern and loss of credibility on the international stage, undermining investor interest and further reducing the possibility of new trade agreements.

1. Level of Ambition
Brazil’s new NDC has no increase in ambition compared to the first NDC, which was presented in 2015 prior to adoption of the Paris Agreement and before alarming new scientific evidence, such as the IPCC's Special Report on 1.5 degrees. On the contrary: the mitigation target in the new NDC will allow significantly more emissions in 2025 and 2030 than the previous one, but this is obscured because unlike the previous NDC the new one does not show the absolute emission targets in tonnes. The new NDC maintains only the percentage reduction for 2025 (reduction of 37% in relation to 2005) and converts what was in the previous NDC an indicative target for 2030 (reduction of 43% in relation to 2005) into its new official 2030 target.

This means that NDC do Brasil is only compatible with a temperature limit of well above 2°C of pre-industrial levels, while the Paris Agreement calls for holding the temperature increase to well below 2°C, with efforts to limit to 1,5˚C.

According to the NDC proposal prepared by the Brazilian civil society represented by the Climate Observatory, launched at the beginning of the week, Brazil's net emissions in 2030 should be 0.4 GtCO2e to be compatible with the 1.5°C temperature increase limit.

At the same time, the new NDC omitted an important element from the previous NDC – the statement that “The implementation of Brazil’s iNDC is not contingent upon international support”. This unconditional nature was an important element of Brazil’s NDC, which earned Brazil a privileged status as a mature country serious about combatting climate change and able to stand on its own feet.

In omitting this statement, the new NDC leaves open the question of whether the commitments in it for 2025 and 2030 are conditional or not on international support and agreement on carbon market rules. Some elements of the new NDC appear to establish such conditionalities. For example, by indicating that meeting the targets depends on agreement on carbon market rules, requirement to receive US $ 10 billion / year to meet its various challenges including protection of native vegetation – which will be essential to meetings its 2025 and 2030 targets.

If such a conditional exists in the current NDC, this would constitute a clear case of backsliding, which would be a serious violation of the rules and spirit of the Paris Agreement, which make clear that each new NDC must be a progression from the last one.

In order to circumvent this principle, the Brazilian government indicated that the new NDC should be considered by the UNFCCC Secretariat as a new version of Brazil’s First NDC, rather than as the Second NDC, which would make more sense since it covers a different time frame than the previous one. This appears to be a maneuver to avoid the accusation of backsliding from one NDC to the next, in light of a reduction in ambition in relation to the commitments already made.

3. Confusing and lacking specifics
Achieving the targets depends, among other things, on the establishment and implementation of public policies in the economic sectors with significant emissions. Therefore, the omission of measures to reduce deforestation, fossil fuel emissions and subsidies, and to encourage forest restoration actions and the adoption of integrated crop-livestock-forest systems, among other areas (which were included in the 2015 NDC) make the new NDC a vague and unfocused proposal compared to the previous one.

Likewise, the new NDC makes only a brief mention of the National Climate Change Policy. It does not mention that the government will fail to met the goal established by this policy of reaching a level of deforestation in the Amazon by less than 3,925 km² in 2020 (currently it is over 11 thousand km²).

Clarity in communicating sectoral goals and the respective measures are fundamental for the engagement of the various actors necessary for their implementation and improvement. By presenting a NDC that is confused in its commitments and diffuse in the way it will implement them, the Brazilian government is creating obstacles to the engagement and financial or institutional support of other countries.

4. Adaptation and the social issue
Although the government notes Brazil's position as a developing country, citing the social dimension as strategic, the new NDC does not include adaptation actions to protect Brazilian society from climate change impacts and to build resilience, which was included in the 2015 NDC.

The lack of adaptation actions affects several important sectors of the economy, including agriculture. It is worth remembering that the World Meteorological Organization (WMO) recently released its report on The State of the Global Climate 2020, pointing out that the estimated loss this year for agriculture is almost R $ 16 billion in Brazil alone.

5. Social Participation
The emissions reductions requires a collective effort by various actors in the interest of society, which is why the preparation of NDC’s must be a participatory process, open to academia, civil society, the private sector and all other stakeholders. In several sectors, it would be possible to increase the level of ambition established in 2015, which would also provide economic, environmental and social benefits.

The new NDC mentions some institutional arrangements for the participation of society, such as the Interministerial Committee on Climate Change, the Brazilian Climate Change Forum (FBMC), articles 5, 231 and 232 of the Federal Constitution on the rights and guarantees of citizens, especially women and indigenous peoples, and the ILO Convention 169 on indigenous peoples. However, in practice, these spaces were not used to foster dialogue and participation by society in the review of the NDC. FBMC members were not even consulted about the proposal.