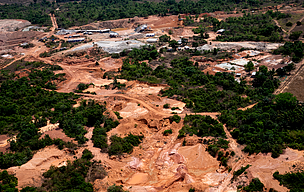 The figures captured by the system this time refer to the deforestation that occurred entirely within the current government
© Araquém Alcântara/WWF-Brasil
The data released on Monday, November 30, by Inpe (National Institute for Space Research) point out that between August 1st, 2019 and July 31, 2020, 11,088 square kilometers of forest were deforested in the Legal Amazon. This is a 9,5% increase compared to the previous period (2018/2019), when the clear cut destroyed 10,129 km2. In 2018, it was 7,536 km2. The 2020 value represents a record for the decade. The pace of chainsaws in the forest does not stop.

The figures are from the Prodes system (Project for Monitoring Deforestation in the Legal Amazon by Satellite) - which for decades has brought precise data on the destruction that is advancing in the largest tropical forest on the planet.This number is an estimate based on 102 priority scenes. The consolidated data will be released in the first half of next year.

The figures captured by the system this time refer to the deforestation that occurred entirely within the current government and demonstrate the total detachment of the challenges and opportunities of the 21st century related to the forest - on the one hand, harnessing the immense potential of nature's bioactives in one of the richest biomes in biodiversity in the world - on the other hand, the need to control changes in the climate and rainfall regime, so important for the energy matrix, water security and national agribusiness.

It is worth mentioning that, with this area deforested, Brazil does not comply with the Paris Agreement, ratified by the National Congress, and its own Climate Change law enacted in 2009.

Deforestation in the Amazon also signals the growing risk to indigenous populations and traditional communities, constantly threatened by illegal land grabbers and miners.

Behind the numbers
For WWF-Brazil, the increase in deforestation in the Brazilian Amazon is mainly due to the feeling of impunity. Official data show that 2019 and 2020 had the lowest number of penalties for illegal deforestation in two decades.

This feeling is reinforced by the expectation of regularization, generated by the current government, of activities that are currently illegal, such as recent invasions of large tracts of public land that would benefit from changes in the rules for land tenure regularization, and mining in protected areas, as foreseen in the bill 191/20, proposed by the Presidency of the Republic. According to INPE, 30% of the deforestation in 2019/2020 happened in undesignated public forests.

"The clear focus on agriculture and mining is further evidence that the current government's strategy is based on the development model of the 1970s, when the notion of bioeconomics did not even exist", says Mariana Napolitano, Science manager for WWF-Brazil.

According to Napolitano, imposing an outdated occupation model instead of researching and exploring the rich biodiversity of the Amazon, for instance, is a way to keep Brazil in the colonial economy, when the country could only export low-value commodities. “Looking at the Amazon through the lens of the 21st century opens new opportunities - including for agribusiness”, she says.

For Napolitano there are solutions to reverse, in the short term, the trend of increasing deforestation in the region.

Two important coalitions of civil society organizations (involving business, academics and NGOs) pointed out concrete paths for the Federal Government, which, however, did not embrace any of them.

They include prohibiting the regularization of illegal occupations on public lands that occurred after 2008, resuming enforcement and effective punishment of offenders, removing invaders from protected areas, promoting actions to encourage sustainable use of the forest, among others.

There are also solutions for the development of the region with social inclusion and respect for indigenous rights - solutions that are fully aligned with the pressing need to keep the forest standing.

The Amazon can be the springboard for our country to be a global leader in a nature-based economy. “It is enough, for that, that Brazil adopts development models compatible with the 21st century”.

What is Prodes
Prodes system defines as deforestation the complete removal of primary forest cover by clear cutting, regardless of the future use of these areas. What is known, however, is that most of the deforestation  in the Amazon is illegal, linked to crimes of land grabbing, illegal logging and illegal mining.

The deforestation rate is made up by the data generated by the Project for Monitoring Deforestation in the Legal Amazon by Satellite (Prodes). The mapping uses images from the Landsat satellite or similar to record and quantify deforested areas larger than 6.25 hectares.

The consolidated rate, however, will be presented until the end of the year or when the processing of all 229 scenes (locations) covering the Legal Amazon is completed.

The figures captured by the system this time refer to the deforestation that occurred entirely within the current government
© Araquém Alcântara/WWF-Brasil Enlarge
Gostou deste artigo?