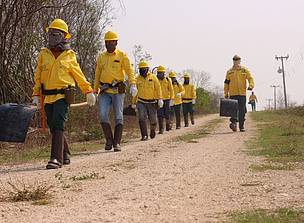 By the end of August, the number of outbreaks in the Pantanal was three times higher than in 2019.
© Elias Campos
The action is part of the Pantanal Observatory campaign to raise awareness and fight fires in the region

The Pantanal burns day and night, almost without rest, just as the brigadiers work tirelessly to fight fire. From January 1st to August 30 of this year alone, 9,746 fire outbreaks were detected throughout the Brazilian Pantanal, according to Inpe (National Institute for Space Research). And the trend is that the situation will only get worse if the factors are kept: rainfall below the historical average, low relative humidity, high temperatures and anthropic fires for livestock practices.

Thinking of minimizing the situation of unpreparedness and helplessness of the communities to fighting the fire that plagues the Pantanal, the Pantanal Observatory, through its member associations - WWF-Brazil and Ecoa - delivered the equipment and uniforms to the community brigade members in the region, who also receive training from Prevfogo (National Center to Prevent and Combat Forest Fires), an organ linked to Ibama (Brazilian Institute of the Environment and Renewable Natural Resources).

The materials began to be made available on August 28, along with the training of the teams of volunteers who will be instructed to collaborate in containing the fire outbreaks at its beginning, preventing the flames from spreading and taking on large proportions. The first community served was the rural settlement 72, in the region of Ladário, close to the APA (Environmental Protection Area) Baía Negra, which was hit hard by the fires this year. In this occasion, seven people were trained to work in emergency situations with the appropriate equipment and protective clothing.

The work carried out by the Prevfogo / Ibama teams, as well as the support of the Firefighters and the Armed Forces, is essential for fighting the fires. However, in many situations, the population gets involved in the first fight against fire outbreaks without adequate equipment and protective uniforms, and they end up exposed to a huge risk. Now, trained, properly dressed and with the help of backpack fire pumps, fire swatters, hoes, and even an air blower, these volunteers are much more confident and prepared to start fighting the first flames, if needed.

The mission is to get a permanent fire brigade, which can act all year round and cooperate with the first combat before the fire takes on large proportions.

For Ecoa's CEO, André Siqueira, the initiative is fundamental in the process of empowering those who already have a predisposition to preserve the environment in which they live. "The people in the community who are available to be volunteer brigadiers are those who, in addition to courage, already have the aptitude concerning the care of their surroundings. With the appropriate training and equipment, they will not only be able to collaborate with the first firefighting but also to sensitize and educate family members and neighbors to make the correct use of this resource, the integrated management of fire and to defend their assets ", he explained.

The facilitator of the Pantanal Observatory and conservation analyst at WWF-Brazil, Paula Isla Martins, added that the network outlined several strategies to act in preventing and fighting fires in the region, among them, the donation of protective and firefighting equipment. "We believe that this initiative will provide better conditions of action for the local populations, increasing the efficiency and safety of the community brigade members. By fighting the fires from the beginning, we can prevent the flames from spreading, causing even greater destruction", commented Paula.

The action is part of the campaign to raise awareness and to fight fires in the Pantanal, organized by the Pantanal Observatory, which has as its slogan "Small sparks, large fires".


WWF-Brasil has been running projects in the Pantanal for 20 years, in partnership with local organizations. In the face of the environmental crisis caused by burning in the biome, actions involving the sending of protective equipment and training for brigade members have been prioritized, in addition to the delivery of food baskets to local communities.

Since August 2019, WWF-Brazil, with support from the WWF Network, has been reinforcing its actions to combat fires and strengthen territorial surveillance in the Amazon. The projects have already reached more than 93 million hectares of land - an area equivalent to more than 18% of the Legal Amazon and larger than the sum of the territories of France, the United Kingdom and Denmark.

By the end of August, the number of outbreaks in the Pantanal was three times higher than in 2019.
© Elias Campos Enlarge 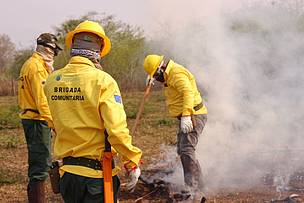 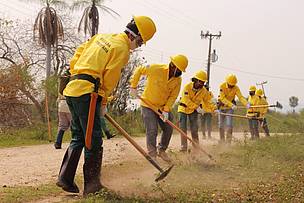 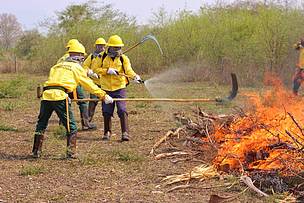