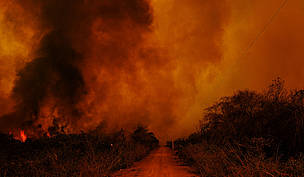 Fires continue to break records in Pantanal
© Mayke Toscano/Secom-MT
After the huge disasters in August, in which almost 30 thousand fires were recorded in the Amazon and there was the largest number of fires in the Pantanal in the last 10 years, September is heading towards even more tragic results in both biomes, according to data by Fire Program of National Institute for Space Research (INPE).

According to INPE, only in the first two weeks of this month, more than 20 thousand fires in the Amazon were recorded so far, which means an increase of 86% when compared to the same period in 2019.
In the cumulative data, the amount of spot fires in the biome from January 1st to September 14th is 12% higher than in 2019 (when the numbers were already alarming) and 28% more than the average of the last three years. When compared to the last ten years, the average rate of fires in the Amazon is an impressive 43% higher in 2020.

The situation, however, manages to be even more serious in the Pantanal, where experts say that the outbreaks of fires are "out of control", with record numbers and the flames reaching important regions of environmental preservation of the biome.

By August of this year, the fire had already reached an area of ​​more than 1.8 million hectares in the Pantanal, which represents 12% of the total size of the biome. However, the arrival of September brought an increase of the problem: in the first 14 days of September, 5300 hot spots were registered, practically the same number as the whole month of August, with 5935 points.

"Thus, September will be the month with the highest number of fires in the Pantanal since the beginning of monitoring, in 1998", says the Science Manager at WWF-Brazil, Mariana Napolitano.

Biodiversity loss
Another problem, in addition to the number of fires, is the region where these fires are going to, putting at risk places of environmental protection that are strongholds of species in danger of extinction. The Kadiwéu Indigenous Land and the Encontro das Águas State Park are some of the protection areas that were most affected.

Encontro das Águas is considered the largest jaguar shelter in the world and there are records that more than 80% of its area has already been burned. The blue macaws are considered, today, by the International Union for Conservation of Nature's Red List of Threatened Species as “Vulnerable to extinction” and, because of the current fires in the Pantanal, they lost an important shelter: the Sesc Pantanal Private Reserve of Natural Heritage (RPPN, in Portuguese). Sesc Pantanal is the largest RPPN of the Brazilian Midwest (with more than one thousand square kilometers), serves as a dormitory for this species, and houses dozens of nests (natural and artificial).

The loss and degradation of habitats, mainly caused by deforestation, are some of the main causes of biodiversity loss of fauna and flora in the world. The 2020 Living Planet Report, recently released by WWF network, shows that we have had an average decline of 68% in the monitored populations since 1970. This number is even more alarming for Latin America and the Caribbean: 94% of the monitored animal populations showed a declining trend over the past 46 years.

In Brazil, one example of this loss of biodiversity is the pampas deer (Ozotoceros bezoarticus), which is on the red list as vulnerable to extinction and has its largest populations in the Pantanal. The species, already threatened by hunting and diseases caused by proximity to cattle, is one of the main affected by fire in the biome.

According to Napolitano, it is important to emphasize that even the animals that survive will have a much lower availability of food, in addition to suffering from the pollution generated in the air and in water courses, further aggravating the scenario and the need to end this cycle of tragedies.

“The uncontrolled fires, as we are seeing today, have as their main cause the action of man, who uses fire to clean the pasture or deforested areas. To prevent disasters like these from happening, we need to fight deforestation - in the special case of the Amazon and the Cerrado - and encourage correct and well-planned fire management, in addition to increasing inspection and punishment for those who break the law. Otherwise, we will continue to watch disasters like these every year,” says Napolitano.

WWF-Brazil has been working intensively on conservation actions in the Amazon, Pantanal and the Cerrado, such as support to local organizations and donations of personal protective equipment to community brigades.
Learn more and donate: http://doe.wwf.org.br/pantanal