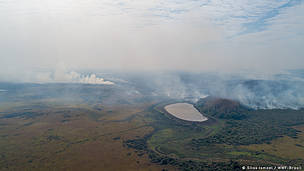 Burning near Corumbá, in Mato Grosso do Sul, on July 31, 2020
© Silas Ismael / WWF-Brasil
Almost half of the fire outbreaks recorded by Inpe this year in the biome were detected in the first 20 days of August

As the hot, dry days progress, the Pantanal and the Amazon are under more pressure from the fire. Even the presence of the Armed Forces in some parts of the biomes and the presidential decree banning fires for 120 days in the country have been able to interrupt the cycle of destruction. From January 1st to August 20, 2020, the National Institute for Space Research (Inpe) detected 8.058 fire outbreaks in the Pantanal, a 205% high compared to the same period in 2019.

The municipalities of Poconé, in Mato Grosso state, and Corumbá, in Mato Grosso do Sul state, are the champions in fire outbreaks in August: 1,397 and 1,310, respectively. Inpe's website provides data on fires outbreaks for the biomes since 1998. Since then, the Pantanal has never experienced a tragedy like this year. “It rained little in 2020. The Pantanal experiences one of the worst droughts in the last 47 years,” explains Júlio Cesar Sampaio, leader of the WWF's Pantanal Initiative.

Of all outbreaks of fires recorded in the Pantanal in 2020, 47,6% were detected by Inpe in the period from August 1st to 20th. According to Sampaio, although August is a dry season, many areas of the biome should still be flooded due to the rains of the previous months. But instead, they dried up, leaving more vegetation exposed to fire. The Paraguay River, one of the most important in the biome, has critical levels in its water volume.

Sampaio points out that, in addition to the climate issue, human actions have contributed to the process of degradation in the Pantanal. Many fires that have occurred in the past few weeks have started with fires made to clean cultivation areas or pastures. The biome is under considerable pressure due to extensive agriculture and livestock activities. "With the severe drought we are experiencing, this problem is intensifying," he says.

With an area of ​​150 thousand km2, the Pantanal crosses the Brazilian border and extends through Bolivia and Paraguay. “It is the great treasure of South America, unique on the planet. The Pantanal is the largest continental wetland in the world. Rich in biodiversity and ecosystem services, whether through water production or CO2 capture. But, poor management and neglect, no doubt, bring huge losses for communities both in Brazil and in countries that share the biome”, adds Sampaio.

SITUATION IN THE AMAZON

In parallel, 35.308 fire outbreaks were detected in the Amazon between January 1st and August 20. Although there was a 9% decrease in comparison with the same period last year, there is no reason to celebrate. About 58% of the outbreaks registered by Inpe throughout 2020 in the biome were captured in the first 20 days of August. “Deforestation in the Amazon jumped 35% in the last twelve months. There are many areas of forest already felled that can still be burned”, warns Mariana Napolitano, Science Manager at WWF-Brazil.

In addition to the loss of biodiversity, fire is also devastating for the population, which suffers from the increase in respiratory diseases caused by smoke, at a moment when the health system is at the limit due to the Covid-19 pandemic.

WWF-Brazil has been providing immediate support for fighting fires and continuously against deforestation. The organization's main goal is to strengthen local forest guardians, so that they have conditions and training to monitor threats, such as deforestation and invasions of territories that lead to increased fires.

In partnership with the WWF Network, since August 2019 we are strengthening our actions in the Amazon. Our projects have already reached 55.8 million hectares or about 14% of the Brazilian Amazon, an area larger than the territories of Spain and Switzerland combined.

Twenty-six civil society organizations and nine government agencies are benefiting from the projects. The initiative also reached 77 indigenous lands and conservation units and more than 117,000 people. In addition, more than 6,000 pieces of equipment were donated and around 50 training sessions, workshops and assemblies were held with over 2,800 participants.

In the specific context of Covid-19, more than 32,000 people - indigenous and agroextractivists - received food, hygiene products and equipment in the Amazon and in the Cerrado. 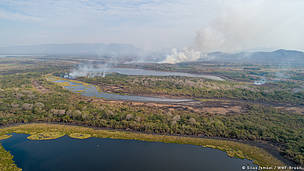 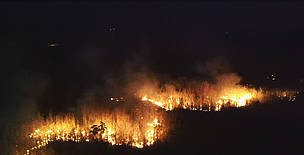