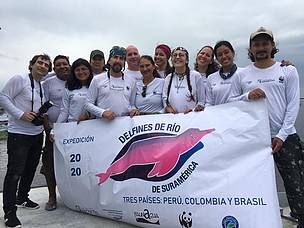 The endorsement of the CBI scientific commission is an important milestone for SARDI, an initiative composed of Faunagua, Omacha Foundation, Mamirauá Institute, Prodelphinus, Solinia, WWF and other organizations.
© WWF
Still in 2020, the development of the Conservation Management Plan (CMP) for river dolphins in the Amazon, Orinoco, Tocantins and Araguaia river basins will continue. This is a result of the coordinated effort a team of professionals from Brazil, Colombia, Ecuador and Peru, including government commissioners, scientists, and technicians with extensive experience in the conservation of these cetaceans.

This significant regional step towards the conservation of river dolphins is the result of the endorsement by the Scientific Committee of the International Whaling Commission (IWC) to the CMP proposal, presented by the four countries last May 22. The IWC is the most prominent international scientific body in charge of regulations related to cetaceans.

River dolphins face a myriad of threats, including bycatch and mortality in fishing nets, directed hunting, habitat loss, pollution, climate change impacts, and noise disturbances, explained Andrea Ramírez, director of Marine and Coastal Affairs and Aquatic Resources of the Ministry of Environment from Colombia. Ms Ramírez presented the proposal before the Committee and highlighted the support received by civil society organizations from the four countries that integrate the South American River Dolphins Initiative (SARDI).

The endorsement of the CMP by the IWC scientific commission is a major milestone for SARDI, an initiative made up of Faunagua, Fundación Omacha, Mamirauá Institute, Prodelphinus, Solinia, WWF and other organizations. This Initiative has conducted extensive work including the estimation of abundance and satellite monitoring of river dolphins in Brazil, Bolivia, Colombia, Ecuador and Peru.

SARDI has called attention to the danger of threats such as construction of hydroelectric dams, which affect river connectivity and, therefore, dolphin movements. The results of these studies were key to developing the CMP, which was acknowledged by the IWC scientific committee as a truly regional cooperation.

Fernando Trujillo, director of the Omacha Foundation and member of the IWC Scientific Committee said that the CMP comes at an important moment: a year ago the International Union for Conservation of Nature (IUCN) recategorized the Amazon river dolphin as Endangered, which highlights the urgency to implement actions for its conservation.

Trujillo added the importance of political and legislative coordination to be achieved between the four countries, promoting joint actions that allow counteracting factors that threaten the survival of these species, such as mercury contamination, deforestation and the loss of river connectivity.

“It is quite remarkable that, in times of pandemic, four countries kept working together and articulated actions to ensure the survival of river dolphins on the continent, since plans to involve partners in Bolivia and Venezuela will be implemented as well", said Saulo Usma, WWF-Colombia Freshwater Specialist.

This proposal is expected to move quickly through the development process so that the implementation phase can begin before the end of 2020. This CMP represents a great challenge since the geographical area where it will be implemented corresponds to three hydrographic basins with approximately 9 million square kilometers.

Concern about illegal trade of piracatinga in the region

SARDI members and other scientific organizations presented an update on the status of piracatinga fisheries in the region to the Small Cetacean sub-committee of the IWC. The trade in this species, known as piracatinga (in Brazil), mota (in Peru, Colombia), or blanquillo (in Bolivia), exerts pressure on river dolphins, since cetaceans may be captured to be used as bait in that fishery.

Specialists drew attention to the fact that the piracatinga fishing and marketing moratorium in Brazil, to prevent the killing of freshwater dolphins, ended in January of this year and has not been reinstated by the Brazilian Government. "This raises concern because there is evidence that piracatinga are being illegally moved towards Colombia. The National Aquaculture and Fisheries Authority has already made several seizures, around 1,500 kilos, so far this year in the border area", explained Fernando Trujillo.

SARDI's coordinator, Marcelo Oliveira, from WWF-Brazil, also added that in Peru there is evidence of the capture of piracatinga using dolphin meat, as well as in Bolivia and Venezuela (in the Orinoco river). In addition, although Colombia maintains a ban on piracatinga trade, notably because higl levels of mercury contamination in these fish, the moratorium in Brazil is in doubt.

Therefore, one of the Committee's conclusions is that efforts should be made by all governments to align regulatory border strategies to limit trade of piracatinga, reducing potential impact on river dolphin populations.
Likewise, the recommendations made relative to the piracatinga fishery are aligned with the river dolphin CMP presented by the four south American governments.

Next steps include improving the CMP itself with the support from an IWC Intersessional Correspondence Group, a series of regional meetings and the engagement of local communities to make sure their perspectives are included in the final document. For the next months a joint effort, coordinated by country commissioners from the four governments with the support from SARDI and other institutions, will develop a process to improve the CMP document.

To learn more about the conservation of dolphins

If you want to know more about the South American Dolphins Initiative (SARDI) and its conservation work, don't miss the three live broadcasts we casted last week on the WWF Amazon Facebook page.

The first, transmited on June 16, in Portuguese, and available to watch here, was a talk between the Initiative's coordinator, Marcelo Oliveira, the brazilian photographer Adriano Gambarini and Miriam Marmontel, from the Mamirauá Institute. The topic of their conversation was how the Covid-19 pandemic has impacted environmental conservation work.

The second transmission was about the importance of conserving these animals for the health of freshwater ecosystems. The chat was between Lila Sainz, from WWF-Bolivia, Aimée Leslie, from WWF-Peru, Jessica Pacheco and Maria Vallejo, both from WWF-Ecuador. This broadcast, held on June 17, in Spanish, is available to watch here.

Finally, on June 18, the third and last conversation took place, between Saulo Usma and Verônica Téllez, from WWF-Colombia, and Fernando Trujillo, from the Omacha Foundation, a member of the SARDI Initiative. Miriam Marmontel, from the Mamirauá Institute, would also participate in the conversation, but she was disconnected that day. The conversation, in Spanish, about the relationship between the rivers of the Amazon, the species of dolphins and our health, is available to watch here.

More information about the South American Dolphin Initiative (SARDI) is available at www.river-dolphins.com.

The endorsement of the CBI scientific commission is an important milestone for SARDI, an initiative composed of Faunagua, Omacha Foundation, Mamirauá Institute, Prodelphinus, Solinia, WWF and other organizations.
© WWF Enlarge 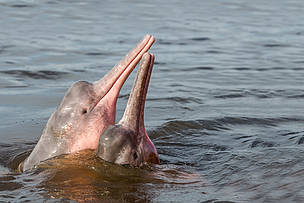 The Management Plan represents a major challenge, as the geographical area where it will be implemented corresponds to three hydrographic basins with approximately 9 million km².
© Shutterstock / COULANGES / WWF-Sweden Enlarge 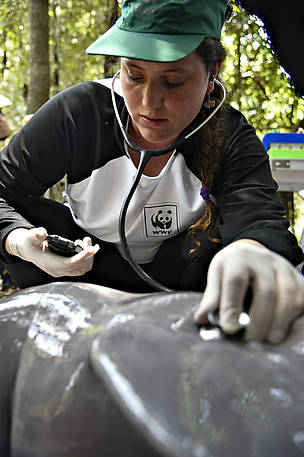 The proposal is expected to move quickly so that the implementation phase can start as soon as possible.
© Adriano Gambarini Enlarge 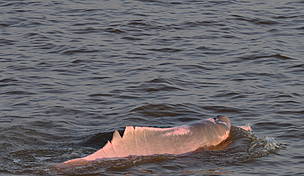 The river dolphins are threatened, mainly, by the construction of hydroelectric dams, which affect the connectivity of rivers and, therefore, the movements of the animals.
© SARDI Enlarge 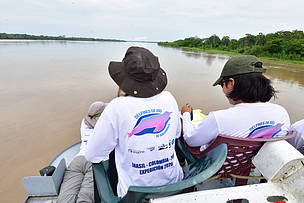 To get to the proposal, the SARDI Initiative carried out extensive work, including estimates of abundance and satellite monitoring of river dolphins in Brazil, Bolivia, Colombia, Ecuador and Peru.
© SARDI Enlarge 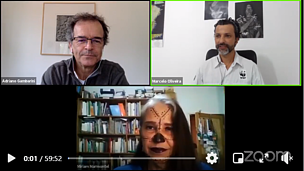 To bring people closer to the conservation of dolphins, three live broadcasts were carried out on Facebook WWF Amazonia. The first was a chat between the coordinator of the Initiative, Marcelo Oliveira, the brazilian photographer Adriano Gambarini and Miriam Marmontel, from the Mamirauá Institute.
© WWF Amazonia Enlarge

In the second transmission, Lila Sainz, from WWF-Bolivia, Aimée Leslie, from WWF-Peru, Jessica Pacheco and Maria Vallejo, both from WWF-Ecuador, spoke about the need to conserve dolphins for the health of freshwater ecosystems.
© WWF Amazonia Enlarge 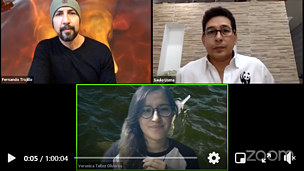 In the third and last conversation, Saulo Usma and Verônica Téllez, from WWF-Colombia, and Fernando Trujillo, from the Omacha Foundation, spoke about the relationship between rivers in the Amazon, the species of dolphins and our health.
© WWF Amazonia Enlarge
Gostou deste artigo?