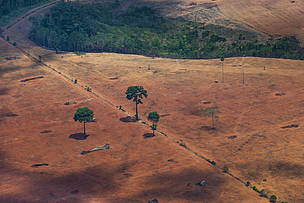 Deforestation in Amazon
© Araquém Alcântara/WWF-Brasil
Deforestation spikes in the Brazilian Amazon, according to new government data

Compared to the same period in 2018, deforestation increased by 30%.

"The data confirms what independent systems have been pointing out: deforestation has been skyrocketing, and if the federal government does not profoundly change its stance on the issue, it will tend to grow even more next year, pushing the country 30 years back in terms of protecting the Amazon," says Mauricio Voivodic, executive director of WWF-Brazil. “It is unacceptable that the Brazilian Amazon continues to be destroyed. Our position is clear: zero deforestation now.”

One of the chief reasons for the increase in deforestation rates is the loosening of enforcement – since 2000, the Brazilian Ministry of Environment has not imposed such a low number of fines for deforestation – and the promises made by President Bolsonaro’s government to downgrade or degazette protected areas, to allow mining in indigenous lands and to facilitate land grabbing, which has being leading to increased invasion of public areas and to deforestation, in violation of the Forest Code, in private ones.

“The data released today by the Brazilian Amazonian Satellite Forest Monitoring Program (PRODES) should serve as a warning to the entire international community and all Brazilian citizens, as the destruction of the Amazon poses serious risks to the planet and to Brazil,” Voivodic says. "Who wins with this? Certainly, it is not indigenous people, river dwellers or other traditional residents of the region who are watching loggers and prospectors steal their land. Nor do farmers, who will suffer from a decrease in rainfall, a natural consequence of deforestation in the Amazon. We can no longer tolerate illegality in the region.”

The impact of rampant deforestation is being felt in protected areas, indigenous lands, and traditional community territories. To protect their homes, the forest peoples have assembled “Forest Guardians” for surveillance and border protection squads. Conflicts have escalated and these surveillance teams are under intense attack. Less than two weeks ago, on November 1, a young indigenous leader, Paulo Paulino Guajajara, was killed in a clash with farmers in the Arariboia Indigenous Land in Maranhão.

Soy Moratorium at risk
The release of INPE’s data comes at a time when measures that have historically helped to prevent agricultural expansion into the forest are being canceled by the current government. A week ago, the Sugarcane Agro-Ecological Zoning was revoked, freeing up subsidized public credit to finance plantations in newly deforested areas in the Amazon. In addition, several federal government officials have said that they will take steps to end the Soy Moratorium in the Amazon, which could further increase deforestation.

The Soy Moratorium is a private commitment made by in 2006 by major soy purchasers to not trade grain that has been planted in newly deforested areas. The deal contributed to a significant drop in deforestation, around 85%, between 2009 and 2018. The soybean acreage in the Amazon more than quadrupled - from 1.14 million hectares in the 2006-07 harvest to 4.66 million hectares in the 2017-18 season - and 98.6% of this expansion occurred in pasture areas already cleared before, according to Abiove (Brazilian Association of Vegetable Oil Industries).

This increase and the resulting decline in deforestation proves that it is possible to reconcile production expansion and the protection of ecosystems and their services. The Moratorium reoriented the expansion to areas that were already open and often degraded.

"In this context, it is critical that international soybean-buying companies, financial institutions, and other players seek to support Brazilian companies that are committed to the Soy Moratorium, as well as civil society and other sectors in finding emergency solutions that can ultimately prevent the boycott to the country's production and impacts on our economy," says Voivodic.

Amazon alive
Science has already shown the fundamental role of the Amazon rainforest in providing water to cities and agribusinesses. Science also tells us that we are getting closer and closer to the tipping point from which the forest can become a large savannah, with serious consequences for the country and the planet.

Deforestation has irreparable consequences for the Amazon – species lose their habitat and risk extinction, especially in regions with a high degree of endemism. The rich biodiversity of the region is already at risk because of deforestation generated by low value-per-hectare activities that do not increase the quality of life of local populations: several studies have proven that the Amazon municipalities with the highest deforestation rate are also the ones which have lower Human Development Index (HDI).

Shallow cut of the forest occurs mainly to give way to extensive livestock, with low return per hectare, and often motivated by attempts to secure land tenure. Other activities vaunted as having great economic importance to the region, such as mining and oil, do not create jobs for the local population when developed on an industrial scale.

The year 2019 was marked by very serious environmental accidents, by the deconstruction of climate and environmental governance policies and instruments, and by the lack of transparency and respect for civil society. Besides risks to Brazilians - risks to democracy and to water and food security - this attack on Brazilian rainforests is also a risk to the entire world. Recent studies have shown that without the forest the temperature in the Amazon could increase by up to 4.5 ° C, affecting the climate all across the planet.

As three-quarters of Brazil's greenhouse gas emissions come from agriculture and land use, it is very important that the other nations working for the success of the Paris Agreement encourage the Brazilian government to accept and implement policies that recognize the urgency of the current climate crisis. The government's chosen route of environmental degradation will eliminate any global chance of limiting the temperature rise to 1.5C, as proposed by the Paris Agreement.