WWF-Brasil Statement: NGO’s accused of setting fire to the Amazon 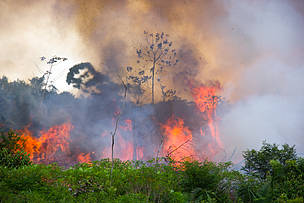 The priority of the public authorities is to look after the public interests of their country, not to create sterile divergences with no base on reality.

For this reason, WWF-Brazil deplores President Jair Bolsonaro's new attempt to distort the legitimate debate of civil society about the need to protect the Amazon and, consequently, to combat the deforestation that causes the out-of-proportion fires that ravage the country and are compromising the air quality in many regions.

His statement that NGOs would be behind the fires because of a supposed cut in financial resources does not find ground on data. Survey of the Institute of Applied Economic Research (Instituto de Pesquisa Econômica Aplicada - Ipea) analyzed the transfer of federal funds to civil society organizations (CSOs) between 2010 and 2018 and found that only 2.7% of civil society organizations (CSOs) receive federal funds. Of this total, only 5% went to the northern region (5%). The study also points to a downward trend in the number of federal transfers since 2010.

The money blocked by the government was the international donations to the Amazon Fund and these resources subsidized firefighting actions, among other things. Therefore, what the alleged cut-off in resource transfers has caused is a reduction in the state's ability to combat deforestation and the fires they cause.

The number of forest fires grew by 70% this year (until August 18) compared to the same period of time of 2018.  In all, Brazil recorded 66.9 thousand spots of forest fires, according to the Nacional Institute of Space Research (Instituto National Pesquisas Espaciais - INPE).

Also according to INPE, the most affected biome is the Amazon, with 51.9% of cases.
Historically, in this region, the use of fire is directly linked to the deforestation because setting the forest on fire is one of the techniques of deforestation.

According to Amazon Environmental Institute of Research (Instituto de Pesquisa Ambiental da Amazônia – IPAM), the 10 cites in Amazon with more forest fires are the same ones with more deforestation.