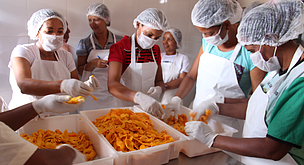 The farmers of the Cooperative of the Family Farmers and Agroextractivists of the Peruaçu Valley (Cooperuaçu) have been working since 2016 in the collection, processing, storage, and commercialization of native fruits from the Cerrado
© Thaís Lima/WWF-Brasil
The project supported by WWF-Brazil was selected as a success case

They are Xakriabás indigenous, quilombolas from the Peruaçu Valley, agroextractivists and family farmers. A small group of 60 people in total. But as a result of the collective work, they have impressive results: almost 20 tons of agroextractivist products benefited and marketed per year and the equivalent of 150,000 hectares of Cerrado still standing, alive and protected.

The farmers of the Cooperative of the Family Farmers and Agroextractivists of the Peruaçu Valley (Cooperuaçu), based in the Federal Environmental Protection Area of the Peruaçu Caves, the towns of Januária, Bonito de Minas, Cônego Marinho and Itacarambi, in Minas Gerais, have been working since 2016 in the collection, processing, storage, and commercialization of native fruits from the Cerrado, such as pequi, buriti (moriche palm), coquinho-azedo (jelly palm), umbu (Brazil plum), jatobá (Brazilian copal) and others, that become jellies, sweets, flours and other gastronomic delights.

All this abundance, supported since the beginning by WWF-Brazil, was highlighted in the II Workshop of Mosaics of the Protected Areas, which took place from June 11 to 13 in Brasília, as a success case to increase the income of the rural communities and to protect the Cerrado from constant threats (Recent Data from MapBiomas Alert reveal that the Cerrado is the most deforested biome of the country - see beside).

The Technical Coordinator of Cooperaçu, Joel Siqueira, made an appeal: "it is necessary to strengthen the agroextractive cooperatives of the Cerrado because they are preserving the biome. The rural communities that work in the agroextractivism preserve the soil, water, flora and fauna, and income generation, so that they don’t have to migrate from the country to the city".

Kolbe Soares, the conservation analyst for WWF-Brazil, closely followed the creation of Cooperuaçu and works with other agroextractive cooperatives and several projects in the Sertão Veredas Peruaçu Mosaic. She explains that the cooperatives strengthen the work of local extractivism within the Peruaçu area of the Mosaic and also contributes to the community organization.

"There were more than 10 community associations involved in the foundation of Cooperuaçu that engaged more than 100 families in the process. It is a work that has been developed by WWF-Brazil in the area with the strengthening of the basis of the supply chain of sustainable vegetal extractivism and the integrated management of Conservation Units and territorial planning," explains Soares.

WWF-Brazil in the Sertão Veredas Peruaçu Mosaic
WWF-Brazil has been working in the area since 2010, with assistance from the Critical Ecosystem Partnership Fund (CEPF) and the Humanize Institute. The actions seek to promote encouragement for the adoption of good agricultural practices (GAPs), the implementation of social technologies and agroforestry systems, the strengthening of the integrated management of Conservation Units, and other protected areas.

WWF-Brazil also works with territorial mapping actions focused on the systematic planning of conservation in the Cerrado and on the support to the sustainable vegetal extractivism of the fruits from the Cerrado with the Agroextractivist Cooperatives and Community Associations. It also carries out communication actions aimed at appreciating and rescuing the Cerrado.

The farmers of the Cooperative of the Family Farmers and Agroextractivists of the Peruaçu Valley (Cooperuaçu) have been working since 2016 in the collection, processing, storage, and commercialization of native fruits from the Cerrado
© Thaís Lima/WWF-Brasil Enlarge 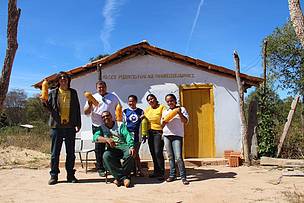 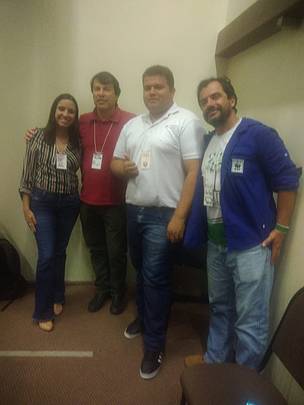 Joel Siqueira and Kolbe Soares during the II Workshop of Mosaics of the Protected Areas
© WWF-Brasil Enlarge
Gostou deste artigo?