Brazil subsidies to big oil could kill the 1.5 degree target 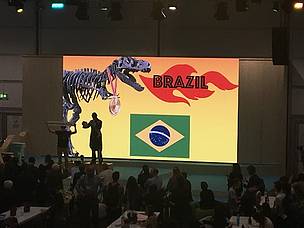 Brazil received the Fossil of thee Day for trying to incentive oil exploration
© Divulgação
While Brazilian diplomats are in Bonn (Germany) defending the swift implementation of the Paris Agreement, back home the Michel Temer administration published an emergency bill that could endanger the very goal of the climate accord: the piece sent to Congress creates fiscal incentives of up to $ 300 billion to oil companies from all around the world to accelerate offshore oil extraction in the Brazilian pre-salt layer. If it succeeds, Brazil will be subsidizing oil reserves whose development could alone eat up at least 7% of humanity’s remaining carbon budget.

This contradiction of the Brazilian government in asking for more ambition for a low carbon economy and, at the same time, encouraging the oil industry, resulted in the delivery of the Fossil of the Day to Brazil. The award, given by the CAN (Climate Action Network), a network of over 100 organizations, is traditional at COPs and aims to highlight negative examples in combating climate change.

The bill was proposed in August but is only being voted now, at an ominous timing – during COP23 and days after the World Meteorological Organization (WMO) published data indicating that 2017 will be one of the three hottest years on record.

In a moment when all countries in Bonn pledge that reducing carbon emissions is key to a safe climate future and the current NDCs are not enough to deliver it, the known pre-salt oil reserves are a climate time bomb. They are thought to contain 176 billion recoverable barrels, which if burned could release 74,8 billion tons of CO2 into the atmosphere. This is equivalent to 7 per cent of all carbon dioxide humanity can still emit if it wants to achieve the Paris Agreement goal of keeping global warming below 2oC, and to 18 per cent of what we can still dump in the air to meet the more ambitious goal of stabilizing warming at 1.5oC – the only safe temperature limit for island nations like Fiji, host of COP23.

"In the past Brazil has played a relevant role in climate negotiations, both with the reduction of deforestation and its NDC that has targets for 2025 and 2030. The call from COP23, in Bonn, is for countries to step up and raise ambition in their NDCs from 2020 onwards. Brazil must scale up renewable energy and keep the pre-salt reserves underground, for the benefit of its people and as its fair share to keep the temperature rise at 1.5oC", says Manuel Pulgar-Vidal, leader of WWF’s Climate and Energy Practice.

A few days before the beginning of COP23, new data published by the Brazilian Climate Observatory showed that Brazil’s greenhouse-gas emissions rose 8.9% in 2016 from the previous year, even though during a deep recession. Brazil, the world’s seventh biggest climate polluter, thus became the only major economy in the world to increase pollution without growing income. According to Carlos Rittl, executive secretary of the Climate Observatory, it shows the contradiction between the country’s international discourse and national action.

“This bill is not only a climate freak, but also an economic liability for a country still mired in recession. By giving big oil a subsidy in the tune of hundreds of billions, President Michel Temer is either dooming the planet or tying his country to stranded fossil assets”, says Carlos Rittl, executive secretary of the Climate Observatory. “Since the President was irresponsible enough as to send this bill to Congress, the task of stopping the madness now is in the hands of House speaker Rodrigo Maia.”

Jennifer Morgan, executive director of Greenpeace, adds that the incentives to accelerate the development of pre-salt have consequences not only to Brazil but the whole planet. "This is a terrible sign, more important than speeches are the practical actions that can drive us to fight climate change. With this bill, Brazil will make the global responsibility to reduce emissions even more difficult than it already is".

"The Brazilian government should be honoring the commitments it assumed under the Paris Agreement and completely restructuring its energy matrix, redirecting resources to renewable energies. But instead, they are giving subsidies that strengthen the fossil fuel industry. This bill not only damages public safety, but also will exponentially increase the country's greenhouse gas emissions. This irresponsibility needs to be denounced", says Nicole Figueiredo de Oliveira, director of 350.org Brazil and Latin America.

Say NO to this bill that incentives to oil exploration