Brazil could lose this year the equivalent to the territory of Portugal in terms of protected areas, WWF-Brazil warns 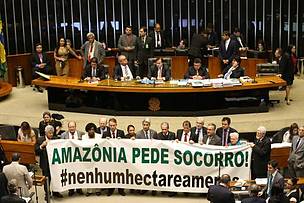 The issue covers federal protected areas from North to South. Land grinding and mining are the vectors of the dismantling.
© Agência Brasil
A dismantling of more than 30 thousand square miles - equivalent to the territory of Portugal - in federal protected areas in Pará, Amazonas and Santa Catarina is about to happen in Brazil. These are national parks, biological reserves and national forests that should be under the strictest care due to their global importance, but which suffer at this moment an unprecedented attack promoted with the support of governmental sectors, the National Congress, and interests opposed to the environment.

The conflict is not new. The novelty is the outreach and the strategy of this attack.

On the one hand, there are rural producers who occupy or would like to occupy these protected areas illegally, mining companies or squatters of public lands.

On the other hand, there is the National System of Conservation Units (SNUC), which placed Brazil at the end of the last decade as the world leader in the extension of protected areas.

As one side gains more strength, the impact on protected areas may result in further deforestation of the Amazon, which will harm Brazilian goals of reducing greenhouse gas emissions in United Nations Climate Convention, besides ruining the program involving protected areas of the Amazon (ARPA) and threatening the country's commitments to the Convention on Biological Diversity (CBD).

The alert is in a dossier released today by WWF-Brazil.

According to the document, the potential damage is huge. It is enough to say that one of the ongoing projects in Congress, PL 3751 makes null and void all acts of creating protected areas whose private owners are not indemnified in the period of five years.

To get an idea of the impact of this proposal, the ICMBio (Chico Mendes Institute for Biodiversity Conservation) calculated the extension of private land which has not yet been indemnified within federal UCs as being larger than 20 square miles, but the number could reach almost 40 square miles, according to the Institute.

If approved, the proposal would mean the disappearance of approximately 10% of federal protected areas in UCs in the country that, last August, accounted for more than 30 thousand square miles.  This is ten percent of the total territory protected by federal UCs.

The proposal presented by Congressman Toninho Pinheiro (PP-MG) in 2015 also prevents the creation of new UCs without "prior and fair" monetary compensation and this is only one of the ongoing projects in the Congress. They are examples of the phenomenon that academic literature refers to as PADDD – Protected Area Downgrading, Downsizing and Degazettement (reduction, recategorization and disaffection of protected areas).

The attack against the UCs has been gaining momentum since December last year, after the publication of provisional measures by President Temer, the WWF-Brazil dossier highlights. The main target was Jamanxin National Forest, created to stop deforestation in the BR-163 region of Pará.

The statement of reasons signed by Environment Minister José Sarney drew attention to the high rate of illegal deforestation in Flona Jamanxim, a problem attributed to the remaining land conflicts and illegal mining activity in the region, which has a great gold potential in the Tapajós Basin.

Another provisional measure published on the same day used the constructions of a railway to transport grain as a justification. Flona Jamanxim lost 57% of its territory, which was no longer protected or was less protected, with the liberation of economic activity. However, the damage would be much worse in Congress.

The text of the dossier reminds us that before, in early February, a group of parliamentarians from the Amazon basin received a favorable nod from Minister Eliseu Padilha (Civil House) that Planalto would suggest a proposal for a change in UCs in the State, which affects more than two million acres currently protected.

The proposal aims at the extinction or reduction of five conservation units created in 2016, in areas previously regularized from the land's point of view: the Manicoré Biological Reserve, the Acari National Park, the Aripuanã National Forest, the Urupadi National Forest and Campos de Manicoré Environmental Protection Area.
In April, special congressional commissions amended the provisional measures issued by Temer in December, increasing the size of the environmental damage to more than two million acres that are no longer protected. The advance against UCs in Pará was celebrated in plenary by Senator Flexa Ribeiro (PSDB-PA), a sort of icon of the fight against UCs in Congress. According to the senator, the result of the votes, to be confirmed by the plenary before going to the presidential sanction, "offers the opportunity for rural producers to regularize their areas and productive activities."

WWF-Brazil had access to documents that show that the attack on protected areas had already gained allies within the government itself. In a technical note, the Ministry of Mines and Energy endorses the interests of gold miners operating in the Tapajós region and especially the interests of Brazauro Recursos Minerais, a subsidiary of Eldorado Gold, based in Canada.

The note claims that the company had invested $ 76 million in the "Tocantizinho" project, in which it plans to invest more than half a billion dollars. The MME also counted dozens of research authorizations and mining permits, which would have to be reimbursed due to the alteration of the limits of the UCs proposed by the government, in addition to more than 250 requirements for mining in the region.

The Congress banned the expansion of Rio Novo National Park (a compensatory measure to the proposed reductions). ICMBio estimates that Jamanxim National Forest will lose more than two million acres of its territory based on proposals approved by the commissions. The biodiversity loss is also huge when altering the boundaries of Nascentes Biological Reserve in Serra do Cachimbo, which protect the springs of rivers that form the Xingu and Tapajós basins.

"We must remember the commitments made in the Amazon Protected Areas Program (ARPA), which supports the management of UCs in the Amazon with contributions from external resources. Funders should demand explanations about what is taking place in Brazil, "warns Maurício Voivodic, Executive Director of WWF-Brazil.
The advance against the UCs in the April ballots extrapolated the limits of the Amazon and reached the National Park of São Joaquim in Santa Catarina, which had its limits changed by pressure from rural producers established in the region. It is an area of ​​remnants of araucaria forest, important in the recharge of aquifers, according to ICMBio. Due to the votes on the provisional measure number 756, the park has lost 20% of its territory.

Also in April, in another hurried session, the Legislative Assembly of Mato Grosso approved the project that extinguishes Serra Ricardo Franco State Park, an area of integral protection of 390 thousand acres, created 20 years ago.

The grounds presented by congressmen was the fact that the regions had been deforested already, which would not justify the maintenance of the status of protected area. The park is home to farms belonging to the Chief of the Civil House in Temer's government, Eliseu Padilha, who had his assets frozen at the end of last year by the Justice of Mato Grosso due to environmental degradation. This is a sign that the attack to UCs is not limited to federal areas.

The issue covers federal protected areas from North to South. Land grinding and mining are the vectors of the dismantling.
© Agência Brasil Enlarge